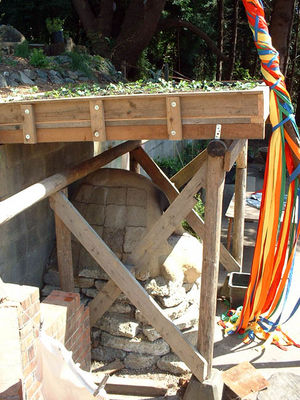 All living roofs encompass a growing medium and vegetation into their design. They also need to encompass a water proof barrier and sometimes a root proof barrier as well. Living roofs can greatly enhance the aesthetics of their surroundings by providing a green space where a traditional roof would not while at the same time providing many environmental benefits. The plants in a living roof can also help reduce the amount of rain water runoff by absorbing the water into the growing medium and roots. Living roof also provide an environment for micro-organisms. They provide extra garden space and help sequester carbon through photosynthesis. A living roof can be built on any scale large or small and can help create a relaxing and natural atmosphere.

This project encompassed dismantling a dysfunctional living roof and building a new one in its place. The project consisted of two parts. The first part was to take down the old living roof which was only a few months old but had many problems. The most critical problem was that the living roof was leaking water. As I was taking it apart I noticed that this living roof had a solid foundation but its flooring was made out of cut redwood branches. Above the redwood branches a layer of burlap and straw was laid to try and create a flat surface. On top of that a water proof layer of plastic was laid which covered the bottom of the roof and went to the top of the siding. The siding was made of strips of bamboo. The bamboo had already begun to rot but the reason this roof was leaking was because the redwood branches were sticking out and inch pasted the bamboo siding. Water was hitting the redwood branches and seeping along them until it hit the burlap and hay. The burlap and hay absorbed the water like a sponge and dripped from its lowest point. The drips were hitting the cob oven below and actually damaging the it. Another problem was that the plants were not growing in the soil because it was almost pure clay. So I replaced the old living roof with a new one that is much stronger, wider, longer, and more protective of the cob oven. This new roof is not as steep as the last one but still has an adequate angle to ensure excess water will drain. The layer of soil is much shallower so the roof won't become as heavy during the rainy season. This living roof is built out of recycled materials and will last much longer then the previous one. This living roof is aesthetically pleasing and was planted in a manner that will assure its vegetation takes to the soil and that the roots from the vegetation hold the soil in place while absorbing water from it. 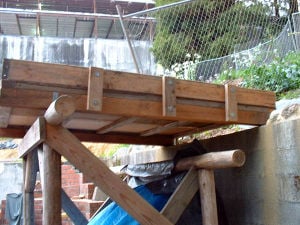 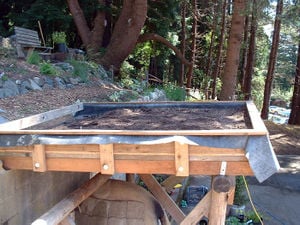 This living roof was built on the patio of Humboldt States Campus Center for Appropriate Technology. It was built directly above a cob oven to protect the cob oven from rain. Click here to view CCAT's home web page 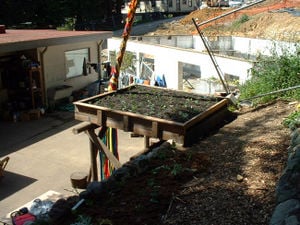 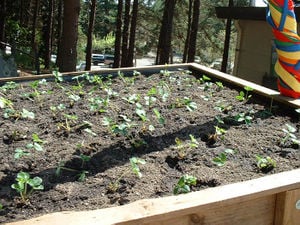 This living roof is just like any other appropriate technology project in the sense that it was cheap to build but it took a lot of time to construct. The total cost was just about $80.00 USD, but it took over seventy hours to gather materials and build, much longer than a similar sized traditional roof top. But the reward is what counts. The reward of this living roof is a new addition to CCATs collection of alternative constructions. This living roof also enhances their patio and landscape while providing environmental benefits at the same time. Remember that this living roof was built almost entirely out of recycled materials, thus helping to reduce the amount of virgin resources extracted from the earth. Don't forget the annual harvest of strawberries to fill CCAT's pedal powered blender throughout the summer months. What a sweet addition to CCAT's habitat.

The CCAT living roof project seems to be still in tact. CCAT denizens reported no leaks or damages to its foundation and the living roof is continuing to perform as a good shelter for the Cob oven underneath. The living roof is continuing to serve as a good place to grow vegetables, and a variety of greens were recently harvested from its roof. Although its yield was not of commercial stature, the living roof project showed significance to uphold a viable representation of environmental beneficiary possibilities. Though there are no vegetables shown in the photograph, the The CCAT association has continued to and plans to plant more vegetation in the upcoming seasons to properly utilize its potential. There have been no issues with the roof, and no necessary maintenance is scheduled due to the lack of issues.

The roof is still in good shape. It is being used still with a greener looking picture this time around. 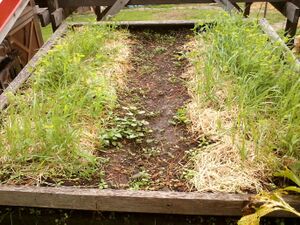 A greener living roof.
Page data
Retrieved from "https://www.appropedia.org/w/index.php?title=CCAT%27s_living_roof&oldid=619166"
Cookies help us deliver our services. By using our services, you agree to our use of cookies.
Categories:
Comments
Privacy policy · About Appropedia · Disclaimers · Mobile view · Content is available under CC-BY-SA-4.0 unless otherwise noted.
</html