From Appropedia
Redirected from Bright green 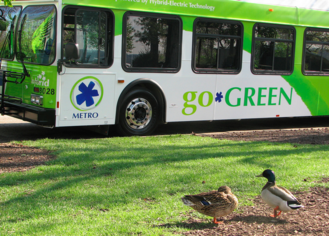 aims for a society that relies on new technology and improved design to achieve gains in ecological sustainabilityW without reducing (indeed, increasing) the potential for economic growth. Its proponents tend to be particularly enthusiastic about green energy, hybrid automobilesW, efficient manufacturing systems and bio and nanotechnologies, are supportive of dense urban settlementsW.

The term "bright green", first coined in 2003 by writer Alex SteffenW, refers to the fast-growing new wing of environmentalismW, distinct from traditional forms.[1] Bright green environmentalism aims for a society that relies on new technology and improved design to achieve gains in ecological sustainability thereby increasing the potential for economic growth and attending to human needs.[2] Similarly the principle of demographic transitionW shows that as populations gain access to greater technology and a better standard of living their rates of population growth generally slow or even reverse.

Its proponents tend to be particularly enthusiastic about green energyW, hybrid automobilesW, efficient manufacturing systems, bioW and nanotechnologiesW, ubiquitous computingW, dense urban settlementsW, closed loopW materials cycles and sustainable product designs. "One-planet living" is a frequently heard buzz-phraseW.[3][4] They tend to focus extensively on the idea that through a combination of well-built communities, new technologies and sustainable livingW practices, quality of life can actually be improved even while ecological footprints shrink.

The bright green approach puts its trust in technology to give us answers in time, if we just put suitable resources into researching and applying solutions.

Technology is advancing and technologies such as thin film solar photovoltaicsW (e.g. copper indium gallium diselenideW) offer great hope. However, the rate of progress is uncertain, and as climate change is already happening, action is needed now, without waiting for these new technologies.

Contemporary environmentalistsW are often described as being split into three groups, "dark", "light", and "bright" greens.[5]

"Light greens" see protecting the environment first and foremost as a personal responsibility. They fall in on the transformational activistW end of the spectrum, but light greens do not emphasize environmentalism as a distinct political ideology, or even seek fundamental political reformW. Instead they often focus on environmentalism as a lifestyleW choice. The motto "Green is the new blackW" sums up this way of thinking, for many.[6] Though many environmentalists of all stripes use "lite green" to describe products or practices they believe are greenwashingW.

In contrast, "dark greens" believe that environmental problems are an inherent part of industrialized capitalismW, and seek radical political changeW. Dark greens tend to believe that dominant political ideologies (sometimes referred to as industrialismW) are corrupt and inevitably lead to consumerismW, alienationW from nature and resource depletionW. Dark greens claim that this is caused by the emphasis on economic growthW that exists within all existing ideologies, a tendency referred to as "growth mania". The dark green brand of environmentalism is associated with ideas of deep ecologyW, post-materialismW, holismW, the Gaia hypothesisW of James LovelockW and the work of Fritjof CapraW as well as support for a reduction in human numbersW and/or a relinquishment of technologyW to reduce humanity's impact on the biosphereW.

More recently, "bright greens" emerged as a group of environmentalists who believe that radical changes are needed in the economic and political operation of society in order to make it sustainable, but that better designs, new technologies and more widely distributed social innovations are the means to make those changes - and that society can neither shop nor protest its way to sustainabilityW.[7] As Ross Robertson writes, "[B]right green environmentalism is less about the problems and limitations we need to overcome than the “tools, models, and ideas” that already exist for overcoming them. It forgoes the bleakness of protest and dissent for the energizing confidence of constructive solutions."[8]

The term "Viridian" is also used (signifying a shade of green that does not occur naturally) for example in the Viridian design movementW. See Wikipedia:Bright green environmentalism#Currents.

Their ideas can be contrasted with what they consider traditional environmentalism: pessimistic, return-to-primitivism, unattractive, "dark green" ideas that depend on a reduction in human numbersW or a relinquishment of technologyW to reduce humanity's impact on the Earth's ecosphere.

Critics of bright green environmentalism consider it to be an unrealistic way of reducing pollution and increasing sustainability. They view such bright greens as wanting to have all of their environmental goals without needing to reduce material prosperity and comfort. Many dark green movements take a moralistic approach of emphasizing catastrophe, suffering, and guilt, while framing environmental progress in terms of tremendous sacrifices, lowered standards of living, and renunciation of the benefits and possibilities of future technological growth. To them, bright green is a pointless attempt to conjure a win-win situation where these major sacrifices would not be required.

EcosocialistW critics of bright green environmentalism argue that the idea that technological progressW will solve ecologicalW problems is popular because it deludes people into hoping that it will prevent them from having to seriously question and change their individual and collective way of lifeW.[verification needed]


Joel KovelW posits an eco-socialist analysis, that patterns of production and social organisation are more important than the forms of technology used within a given configuration of society. Under capitalism, he suggests that technology "has been the essential condition of growthW", so even in a world with hypothetical "free energy", the effect would be to lower the cost of automobileW production, leading to massive overproductionW of vehicles, "collapsing infrastructure", chronic resource depletionW and the "paving over" of the "remainder of natureW".[9] This suggests he sees capitalism as intrinsically unable to regulate itself, in spite of environmental regulationW in Western countries leading to massive improvements in many areas (though not yet in terms of greenhouse gasesW).

In the modern world, Kovel considers the supposed efficiency of new post-industrialW commodities is a "plain illusion", as miniaturizedW components involve many substances and are therefore non-recyclableW (and, theoretically, only simple substances could be retrieved by burning out-of-date equipment, releasing more pollutantsW). He warns "environmental liberalsW" against over-selling the virtues of renewable energiesW that cannot meet the mass energy consumption of the era; although he would still support renewable energy projects, he believes it is more important to restructure societies to reduce energy useW and not relying on renewable energy technologies alone.[9]

Organizations and websites with an explicit "bright green" philosophy include:

Of course the ideas are widely shared, whether or not the term "bright green" is used.

Page data
Retrieved from "https://www.appropedia.org/w/index.php?title=Bright_green_environmentalism&oldid=633504"
Cookies help us deliver our services. By using our services, you agree to our use of cookies.
Categories:
Maintenance categories:
About Appropedia · Policies · Contact · Content is available under CC-BY-SA-4.0 unless otherwise noted.