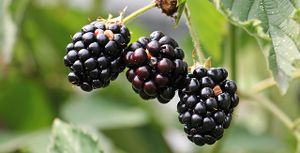 Blackberries are the fruit of many Rubus species grouped together as the Rubus fruticosus species aggregateW, sometimes commonly referred to as "brambles".

*The Award of Garden Merit (AGM) is a certification awarded by the Royal Horticultural Society highlighting a variety which is deemed to perform very well and is suitable for the amateur to grow in a garden.

The RHS Trial of Blackberry and Hybrid Berry carried out in 2013-2015 compared 19 common cultivars of blackberry and Rubus hybrids. The report goes into great detail and is an excellent resource to help with selecting cultivars.[5]

The distinction between blackberry and hybrid berry cultivars can be blurred. Hybrid berries are the result of crossing between various Rubus species, typically blackberries and raspberries.[4] The creation of such hybrids can be a complex story, and in modern times the exact parentage of some are disagreed upon. The Marionberry for example has a complex parentage. A blackberry–raspberry hybrid was crossed with a dewberry to create the YoungberryW (hexapoloid, with red berries). The Youngberry was crossed with a Loganberry (a Dewberry - Raspberry hybrid with dark red berries) to create OlallieberryW. Another hybrid, Chehalem blackberry is a cross between the Himalayan blackberry and the Santiam berry, which is itself a cross between the California blackberry and the Loganberry. Olallieberry and Chehalem have been crossed to produce the very widespread Marionberry (currently the most common blackberry cultivar). There is a hybrid variety with Boysenberry in Australia called Silvanberry. Despite their parentage involving plants other than blackberries, the Marionberry and Silvanberry tend to be considered blackberries, while the following tend to be considered hybrid berries.

Blackberry (n.): "fruit of the bramble," early 12c., from Old English blaceberian, from black (adj.) + berry. So called for the color. Also in Old English as bremelberie, bremelæppel (from bramble).

Deciduous shrub.[2] Growth habit is long and scrambling.[2] It is perennial but the stems are biennial, fruiting on the second year.

In the wild, it "moves" by putting down new roots where its arching shoots touch the ground.[2]

White flowers in Spring.[2] Self fertile (one plant will fruit by itself).[2] Insect pollinated.

For most cultivars, facing is not too important.

More productive in a sheltered site.[7]

From Seed: Seed requires warm and cold stratification (see Seed StratificationW). E.g. keep seed in a box of sand at warm room temperature for 3 months, then store at 4°c (40°F) for a further 3 months.[7]

Tip cuttings: cut the tip of a cane off and push it in the soil and usually it will root.[7] The simplest method.[7]

Tip layering: In summer, bend a healthy, vigorous shoot down so that the tip touches the ground and ig a 10cm (4') deep hole at that point.[8] Bury the tip with well firmed down soil. By late autumn or winter the tip will have rooted and can be separated from the parent plant.[8]

Can also be propagated by dividing the roots or by removing a sucker.[7]

Little maintenance needed.[2] Weed all around the base of the plants.[1] Heavy mulch of well-rotted organic matter in spring.[1] General purpose feed (e.g. blood, fish and bone) in late April.[1]

Fruiting occurs on stems which are in their second year. Generally idea of pruning blackberry is therefore to remove the canes which have just fruited in the last growing season.[7] This pruning is best done in winter[7] when the plant is dormant. However other sources advise pruning sooner after harvest in summer or autumn.[9] Pruning needs to be done every year.<refname=rhspruningweb /> T he plant can stay healthier and more productive if it is allowed to move.[2]

Exceptions to the above are "Himalaya" and "Evergreen" varieties which can fruit for several years on the same wood, so should not be pruned hard.[7]

Generally fairly free of problems,[1] however can be prone to the same problems as raspberries.[4]

Brids. Birds will eat some of the blackberries[10] but this is not usually a big problem requiring any action.

Fruiting depends on variety, and occurs from Mid July to October.[2] Fruit ripens over several weeks on the plants.[2] In Oklahoma, the berries are picked in the weeks following the July 4th weekend.

The best time to harvest is when the fruit is almost ready to fall off.[7] Sometimes the fruit can look ripe in colour, but taste very sharp, needing slightly more time on the plant to ripen. Pick only the plump, firm, fully coloured berries. The fruit will not continue to ripen more once picked. Cooking may improve flavour however.

Once picked, the blackberries need to be eaten within a few days. Some varieties keep slightly better than others.

When harvesting blackberries, watch out for chiggers (also known as berry bugs, see TrombiculidaeW). These are small mites that can cause rashes and itchiness when they bite.

Fresh fruits do not store for long.[2] They can be stored in shallow boxes and refridgerated or frozen.[7]

Page data
Retrieved from "https://www.appropedia.org/w/index.php?title=Blackberries&oldid=686643"
Cookies help us deliver our services. By using our services, you agree to our use of cookies.
Categories:
About Appropedia · Policies · Contact · Content is available under CC-BY-SA-4.0 unless otherwise noted.