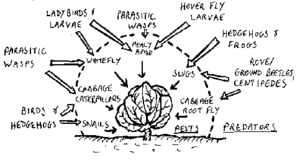 A key belief of the organic gardener is that biodiversity furthers health. The more variety a landscape has, the more sustainable it is. The organic gardener therefore works to create a system where the insects that are sometimes called pests and the pathogens that cause diseases are not eradicated, but instead are kept at manageable levels by a complex system of checks and balances within a living and vibrant ecosystem. Contrary to more 'conventional' gardening practices which often use chemical methods to kill both useful and harmful garden life forms indiscriminately, this is a holistic approach that seeks to develop an understanding of the webs of interaction between the myriad of organisms that constitute the garden fauna and flora. The organic gardener will often hold the view for example that the eradication of the creatures that are often described as pests is not only not possible, but also undesirable, for without them the beneficial predatory and parasitic insects which depend upon them as food or hosts would not be able to survive.

In a healthy natural woodland where there is little direct human intervention, pest and disease organisms will always be present, but, unless there is a drastic environmental change, will normally kept in a state of equilibrium where they are not able to get out of hand to a level which is detrimental to the overall woodland community. This is the model for which the sensitive organic gardener will strive, but at the same time it is wise to recognise that there will often be some degree of intervention needed to manipulate the natural checks and balances to the gardener's favour, particularly if growing plants for food or ornament which would not normally occur in natural situations. Therefore biological control is about developing a range of techniques that use living organisms to maintain the beneficial equilibria in garden landscapes without causing adverse effects to humans or the wider environment. Of course, introducing exotic insects into any ecosystem entails taking risks of moving further from the intended equilibrium through unexpected interactions.

An important part of the biological gardening approach is to become familiar with the various life forms that inhabit the garden, predators as well as pests, and also their life cycles, patterns of feeding and the habitats that they prefer.

Insects have devised many ways to eat other insects. Predators will directly attack and devour their prey, whilst parasitoids will deposit an egg within another insects body, from which a larva will emerge which will devour the host's innards. 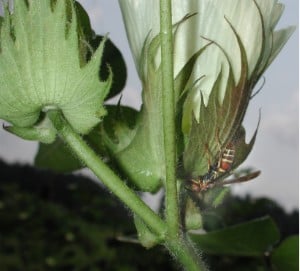 Ladybugs, and in particular their larvae which are active between May and July, are voracious predators of aphids such as greenfly and blackfly, and will also consume mites, scale insects and small caterpillars. The ladybird is a very familiar beetle with red and black markings, whilst its larvae are initially small and spidery, growing up to 17mm long. It has a tapering segmented grey/black body with orange/yellow markings nettles in the garden and by leaving hollow stems and some plant debris over-winter so that they can hibernate over winter.

Hoverflies are another very welcome garden predator. According to this article, resembling slightly darker bees or wasps, they have characteristic hovering, darting flight patterns. There are over 100 species of hoverfly whose larvae principally feed upon greenfly, one larva devouring up to fifty a day, or 1000 in its lifetime. They also eat fruit tree spider mites and small caterpillars. Adults feed on nectar and pollen, which they require for egg production. Eggs are minute (1mm), pale yellow white and laid singly near greenfly colonies. Larvae are 8-17mm long, disguised to resemble bird droppings, they are legless and have no distinct head. Semi-transparent in a range of colours from green, white, brown and black.

Hoverflies can be encouraged by growing attractant flowers such as the poached egg plant (Limnanthes douglasii), marigolds or phacelia throughout the growing season.

Dragonflies are important predators of mosquitoes, both in the water, where the dragonfly nyads eat mosquito larvae, and in the air, where adult dragonflies capture and eat adult mosquitoes. Community wide mosquito control programs that spray adult mosquitoes also kill dragonflies, thus removing an important biocontrol agent, and can actually increase mosquito populations in the long term.

A diverse range of wasps lay their eggs on or in the body of an insect host, which is then used as a food for developing wasps. Parasitic wasps take much longer than predators to consume their victims, for if the larvae were to eat too fast they would run out of food before they became adults. Such parasites are very useful in the organic garden, for they are very efficient hunters, always at work searching for pest invaders. As adults they require high energy fuel as they fly from place to place, and feed upon nectar, pollen and sap, therefore planting plenty of flowering plants, particularly buckwheat, umbellifers and composites will encourage their presence.

Three of the most important groups are;

Choosing a diverse range of plants for the garden can help to regulate pests in a variety of ways, including;

Acting as trap plants by providing an alluring food that entices pests away from crops.

Most of the biological controls listed above depend on providing incentives in order to 'naturally' attract beneficial insects to the garden. However there are occasions when biological controls can be directly introduced. Common biocontrol agents include parasitoids, predators, pathogens or weed feeders. This is particularly appropriate in situations such as the greenhouse, a largely artificial environment, and are usually purchased by mail order.

Some biocontrol agents that can be introduced include; 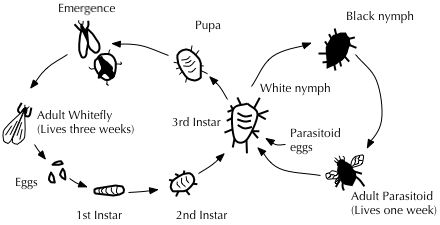 diagram illustrating the life cycles of Greenhouse whitefly and its parasitoid wasp Encarsia formosa. Wasp inserts its egg into a whitefly larva that has reached its third developmental stage, egg hatches and the young wasp larva eats the whitefly nymph from within. Unparasitized whitefly gives rise to second generation adults

Biological control proves to be very successful economically, and even when the method has been less successful, it still produces a benefit-to-cost ratio of 11:1. One study has estimated that a successful biocontrol program returns £32 in benefits for each £1 invested in developing and implementing the program, i.e., a 32:1 benefit-to-cost ratio. The same study had shown that an average chemical pesticide program only returned profits in the ratio of 2.5:1.