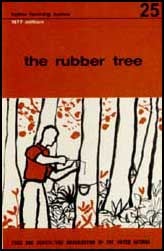 Looking after the plantation[edit | edit source]

To have a good plantation that gives a lot of latex the planter must:

Looking after the plantation before tapping

To look after the plantation before tapping, you must: take good care of the trees; make clearings, that is, remove the less good trees, and those that have not grown well;

The trees must be:

Disbudding means to remove buds that have grown.

When the scion grows, it forms a stem; on this stem shoots appear. All the shoots up to a height of 3 metres from the ground must be removed. There will then be a fine trunk with branches only above 3 metres that will form the crown of the tree. (The crown is all the branches that grow from the trunk.)

During the first year after planting, trees that have not grown must be replaced.

If the crown is too dense, or if one part has more branches than another, it must be pruned 3 or 4 years after planting.

As some trees will die, and some will be ill, extra trees have been planted.

When tapping begins (5 years after planting), there must be 500 trees to the hectare; the trees should be 50 centimetres in circumference at a height of 1 metre from the ground.

So from the second year after planting, some trees have to be removed. Remove about 30 trees every year during the second, third, fourth and fifth years.

In choosing what trees to remove, take account of the following:

They must be cultivated with the hoe, by hand, as follows:

If the dry season is very dry, the number of cultivations can be reduced.

Weed killers can also be used, making an application every 3 or 4 months.

The ground cover plant must be cut 3 or 4 times a year to a height of 30 or 40 centimetres.

One cutting must be done before the dry season; the cut stems and leaves are used to mulch the rows.

You must remove weeds such as Imperata (a herbaceous plant with hard, long, straight leaves and very long roots). You can pull up the Imperata by hand and then dig up the underground roots with a pick.

Taking care of the plantation after tapping[edit | edit source]

To keep the plantation in a good state after tapping has begun, you must:

After about 12 years there should be about 350 trees to the hectare. (There were 450 when tapping began.)

Trees must be removed

By this time the rubber tree is full grown and covers the soil well, so that few plants grow beneath it. All the same, the soil must be kept clear at the base of the trees.

The cover plants between the rows must be cut once a year.

The terraces must be kept up, so that they do not crumble away.

By looking after the plantation well, you will get fine trees. But you must not let them be attacked by diseases.

The most serious disease is root rot.
It destroys the roots and makes the tree die.

The rubber tree may also be attacked by insects; they do less serious damage.

The tree may be attacked by white root rot (Fomes), which makes the roots rot.

Then the tree dies.

It is very important to see if white root rot has attacked a tree, because, by the time you see that the tree is ill, it is too late.

Control of white root rot is carried out in two stages:
First, detecting the disease

During the first five years after planting, twice a year, you must get freshly cut grass and put it close up against the base of each tree. A fortnight later, look to see if there are little white threads on the trees underneath the dry grass.

If you see little white threads, the tree is ill, it has white root rot. So you must treat it.

Dig a hole to uncover the roots of the tree, without injuring them. The hole should be 40 to 50 centimetres deep.

If the roots have been attacked, the tree must be cut down and the roots taken out.

If the roots have not been attacked, and there are only white threads on them, you put a special product on the tap- root and the beginnings of the side roots. This product is called quintozene.

The most dangerous insects are mites and crickets.

The treatment for insects is to apply lindane.