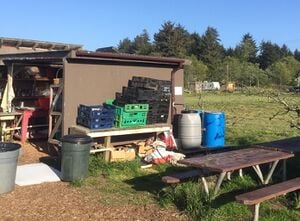 This project seeks to plan and implement a rainwater catchment system on the rooftop of one of the buildings of the Bayside Park Farm (Figure 1). The main goal is to canalize the rainwater in order to water part of the crop during the dry months.

Bayside Park Farm is an educational farm located in Humboldt County in the city of Arcata, CA. The farm has the goal to connect citizens, students and local farms through sustainable and organic agriculture methods. 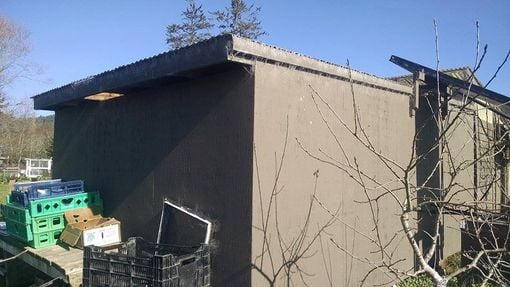 Figure 1: Building before the project implementation

For the course ENGR 305: Appropriate Technology at Cal Poly Humboldt (HSU), our group will develop a project for Bayside Park Farm with the intention of reusing rainwater to supply some needs of the farm. According to the people who work in the farm, the rainwater collected in the winter should be stored to be used in the summer. Their goal is that the rainwater catchment system can produce enough water for the entire summer. The demand would be approximately 60 gallon per month. The project will take place between February and May, 2015.

These following criteria were chosen based on observations by the group members and also on suggestions of the Bayside Park Farm director. The scale weight (1-10) shows the importance of the criteria according to the constraint of each one.

Rainwater catchment systems are projected with the goal to reuse the rainwater that otherwise would be wasted. Besides, according to Porter et al (2008), the implantation of these kind of systems diminishes the demand from the conventional urban system of water supply, reduces runoff that can cause erosion, flooding, and contamination of surface water. Moreover, the rainwater is better for the plants than other water sources that may contain salts and other minerals that can harm the root zones of the plants. In this way, plants watered with rainwater tend to grow better and are more drought tolerant.[1]

The rainwater is often collected and stored during the wet season to be utilized in the dry season.[2] The water collected from these systems can be used for several purposes, such as agricultural and livestock watering, domestic uses, fire protection, and many more.[1] It means that rain can literally save you money!

According to Gould & Nissen-Peterson (1999), a rainwater catchment system consists of the components listed below[3] and shown in Figure 2. 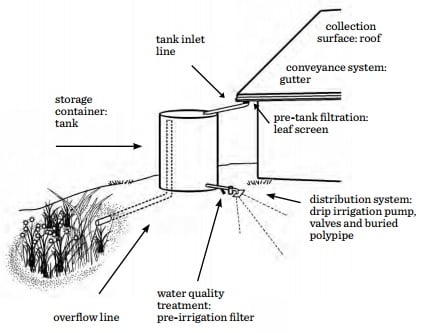 There are three main types of catchment systems: ground catchment, rock catchment, and roof catchment. The collection of rainfall by rooftops, which is the case, is the most commonly used, generally considered small-scale system and used for domestic consumption.[3] One advantage of roof catchments is that they have a high runoff coefficient, which means that it drains almost all the rainwater that falls on their surface. For corrugated metal sheets, which is the case, the runoff coefficient varies between 0.7 and 0.9.[5]

The reservoir(s) can be of three types: surface tanks; underground tanks; or dammed reservoirs. For rooftop catchment systems, the most commonly chosen is the surface tanks. The storage is generally the most expensive part of the system,[2][3] and mainly because of this, the storage capacity of rainwater catchment systems tends to be limited. Thus, the rainfall stored by these systems are often not enough to fully supply the demand of water in the dry periods. It is necessary to have alternate sources of water to supplement the rainwater supply in dry seasons.[6]

The delivery system is responsible for transporting the water from the roof to the storage tank. For metal sheets roofs, which is the case, the most common rainwater collection methods are suspended gutter or gutter with brackets fixed to walls or rafters.[3]

Depending on the use proposed for the rainwater collected, it can be necessary to implement a filtration system, which should prevent large leavings and other dross from reaching the reservoir.[2]

When you are interested in creating a rainwater catchment system, you need to know the climate conditions of the place where the system will be installed.

Arcata, the city where this project will be built, is very rainy. California has an average of 24.71 inches of annual rain, getting 14.5 fewer inches of rain than the national average (39.17 inches).[7] Different from the rest of California, in the last 30 years, Arcata has had an annual average of 49.15 inches of rainfall, which is 26% more than the average nationwide and 99% more than the average in California.[7] This means that Arcata does not have a problem with a shortage of rainwater. The only complication is that it rains a lot in the winter but not much in the summer. In the winter and fall, the average of rainfall is 23.22 and 13.33 inches per season, respectively.[7] Unlike in the summer and spring, the average rainfall is 2.05 and 10.55 inches per season, respectively.[7] Figure 3 shows the monthly average rainfall for the city of Arcata, where it is clear that the difference in rainwater availability is different throughout seasons of the year. 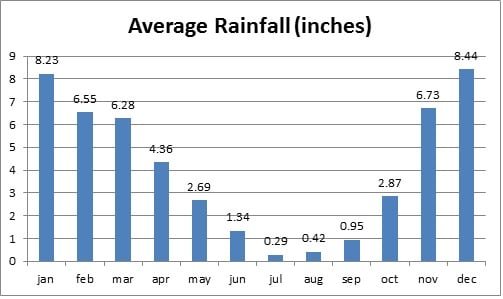 Figure 3: Monthly average rainfall for the city of Arcata[8]

The following table presents the main steps for the project implementation, proposed dates and actual dates of completion of the tasks.

This is the budget for the present project, according to the specifications defined by the design of the rainwater cathcment system for the Bayside Park Farm. Part of the materials were bought with donations from a local organization (which are specified with $0.00 in the column "Our cost"), and some other was found in the farm and reused (specified with "reuse").

In order to design a rainwater catchment system, the following procedures were used:

Before putting the gutter in place.

Put the gutter in place.

Connect the tanks to each other and the first tank to the downspout.

Connect the first tank to the downspout 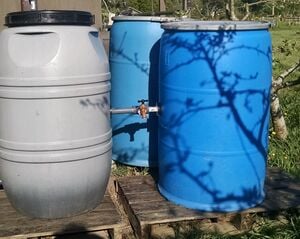 Take the rainwater collected by the system from the faucet located between the first two tanks with a bucket, whenever necessary. If wanted, a hose can be placed. 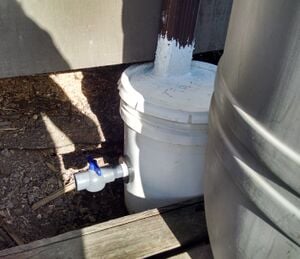 The maintenance activities should follow the directives and schedule shown in the table in order to maintain the system operating properly. Following the maintenance schedule increases the durability and efficiency of the system.

The system was tested with water from the garden hose, since there would not be time for testing the system with actual rainfall. The first test was held on 4/30/15, and the system presented leaks in two points: on the bucket used as first-flush diverter and on the bracket used to connect the downspout to the first nipple. The leaks were fixed with silicone and epoxy glue and the system tested again on 5/6/2015.

What we could learn with this marvelous project is that everything become more easy and fun if you have a nice group to work and share the responsibility. Also the we gained knowledge to work with water and realize that is really difficult to manage water because a simple problem as a leak can cause a huge problem. In conclusion the best lesson learned was to work with people that we did not know, as our sponsor that donate almost all the money that we need to build our project and also the people from the farm.

If wanted, there could be included an extra tank to the system, which would be full for only 9 or 10 months of the year, but it would decrease the demand of water from the City for most of the year. 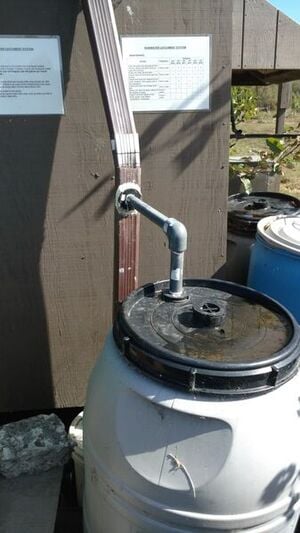 The system should be able to collect 60 gallons of month most months and the water can be stored in tanks as the project's goals were. However, due to a misunderstanding of the current farm management the rainwater from the system is currently not being used and has fallen into disrepair. The instructions for the first flush which state that the water from the first flush should be used to wash feet and not water the crops was misconstrued to mean all water from the entire system. The farm still relies on the city for most of its water supply even though the rainwater catchment system is still in place. However, the first flush itself may be nonfunctional due to the downspout no longer being connected to the first flush. This means the water currently stored in the tanks is unsafe for crops, and that going forward this needs to be rectified. 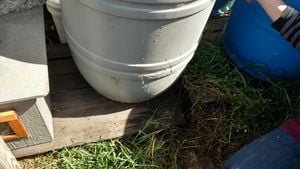 The pallet breaking under the weight of the barrels.

The pallet designed to keep the first storage tank upright is starting to break under the weight because no water has been removed from the tanks for crops. The downspout is crooked and stressed by the tank being lowered by the breaking pallet, and there's contaminant build up on the first flush container. Because of the neglect, there have been attempts to contact the farm to assist them in fixing and putting the system in to use, but as of 10/15/2016 no progress has been made on this front. Going forward this project could benefit from better instructions for the staff and volunteers of the farm that explain in detail the difference between the first flush and the storage containers.

This was a project developed by the following team for "ENGR305: Appropriate Techonology" course of Cal Poly Humboldt on Spring semester of 2015.