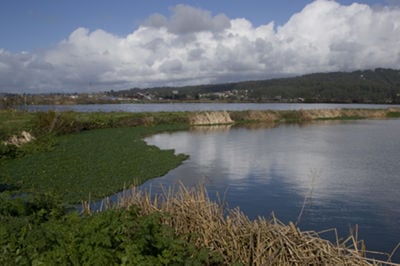 The Arcata Marsh and Wastewater Treatment Plant uses oxidation ponds as part of their secondary wastewater treatment process for wastewater. Primary wastewater treatment removes roughly 60% of the suspended solids. Secondary treatment speeds up natural processes of degradation by providing large amounts of oxygen to the wastewater. Oxidation ponds are generally more practical for smaller communities, such as Arcata, due to the large amount of space they require compared to other mechanical methods. 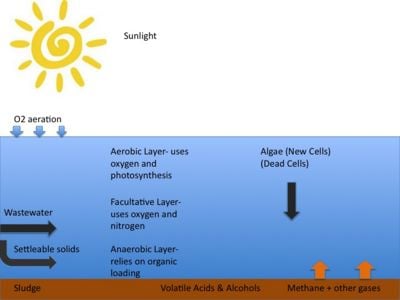 *Aerobic Ponds- Aerobic ponds are generally shallow, less that 1 m deep, allowing sunlight to pass through to the bottom. The presence of sunlight in the entire depth ensures that algal photosynthesis is active throughout the entire system. During the day, the alga uses the sunlight, carbon dioxide, and inorganic material provided from bacteria to grow. In this process, the alga releases large amounts of oxygen into the ponds. Aeration with wind or mechanical aerators also can increase dissolved oxygen levels in the water. Aerobic bacteria break down organic suspended solid waste, and their metabolism uses the oxygen that the algae provides.

Arcata's oxidation ponds function with the Arcata Marsh treatment wetlands as the secondary wastewater treatment. There are two separate ponds and the waste water flows through the following process (figure 3): 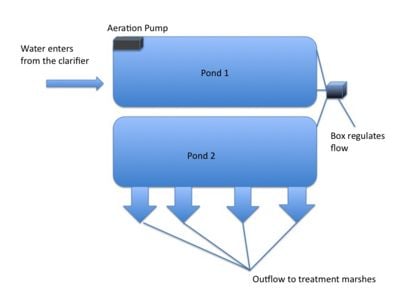 Arcata’s oxidation ponds are facultative ponds and they have several specifications: