We distinguish the main operation here by the obtaining of the molded object, auxiliary finishing operations, and polishing.

Charcoal, coal, gas and fuel oil has been used for these production processes. In sub-Saharan Africa there is a tendency to use the first, as it is a traditional fuel. This is also the fuel used by our by our Cameroonian partner. And for now, it can be justified for the following reasons:

Regulating the temperature of the process is more difficult to achieve. That is one reason why gas and liquid fuels are often more expensive to buy in Africa, they are preferred in processes of industrial facilities.

Only the furnace fans, the finishing machines and lighting of the premises require a electricity grid. A network of ~ 220V, 35 or 60 should suffice.

This is waste of variety of objects. It is therefore difficult to characterize them chemically with precision. In addition to aluminum, they also contain other elements, metallic or other. However, we can distinguish the waste which are likely to contain alloy elements. These are generally heavy, with a specific high density: engine parts of vehicles, such as housings.

The supply of sand should not pose a big problem in sub-Saharan Africa. A sand which any potter can acquire is appropriate. A test such as the one suggested here can already give strong indications about its essential qualities:

For the measurement of moisture content, a not too expensive measuring device with calcium carbide may be used, the procedure is described as well in paragraph 4.2.1

The moisture content is adjusted prior to molding; it may be more effectively evaluated prior to molding by taking a handful of sand that is ready to use. When tightly pressed in the hand, the hand must open, clearly revealing the imprint of the fingers.

Talc and wood ash, finely ground can serve as an insulation bonding between the model and the <<à vert>> sand.

It is only necessary to adjust the sand content in order to obtain a gas permeability, and plasticity.

In their molded state according to the "source" technique, the pots must be deburred to the level of their outer edge. This deburring as well as a cutting of the casting drop, the channel and the attacks are sufficient. They do no longer require much more work polishing the outer surfaces or interior surfaces.

Only a selling price established under known conditions which are determined accurately can be taken into account. This is something which could not be achieved in the conditions observed in Cameroon in August 2003. The values in the table below are therefore subject to change. As a reference, the selling price of two cookers has been identified in the large area of Nikki to Mokolo-Yaoundé, in the same period. We may thus consider that with the suggested methods and procedures, the selling price should certainly not be higher than that of the Cameroonian producers. The quality of the piece obtained raw from the foundry is far superior to that of the products prepared artisanally and sold on the Cameroonian markets. The main gain is retrieved in the reduction of work in the finishing of the pieces.

Price of of primary matter

Selling price of the artisan

Staff Taking into account the observations made in Cameroon, it is estimated that, in Cameroon, a facility producing 400 kg of pots of Ø 300 per week would provide direct employment to 6 manual workers, full or part time. Cost of labor at 8/03: 3500 FCFA per day. Matter Cost of scrap at 8/03: 500 FCFA/kg

For critical parts or to obtain a better surface appearance of the parts, it is necessary to degas the molten metal before pouring. Different techniques are used to this end, the most appropriate in the current context uses nitrogen gas.

Degassing with nitrogen gas At the end of the merger, the heating of the melting pot is stopped or moderated by the decision of the ventilation of the furnace, which initiates the lifting of the dirt to the surface of the bath. 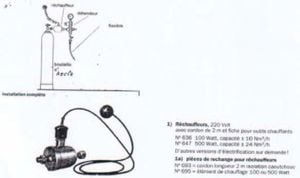 You may also proceed to immersion of pellets generating nitrogen at the end of the melting. Precautions to take: the gas and the pellets must be absolutely anhydrous. 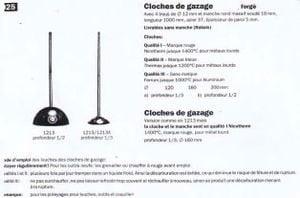 To limit the import of expensive consumption materials, the first solution is often preferable, even if the injection rods have a certain fragility. Duration: Allow 5'/100 kg of molten metal.

Controlling the degree of degassing The mixture which is melted and possibly ready to pour, is submitted to a precise checking of its temperature which has to be kept constant at ± 5° C. An efficient degassing can only take place if the melting pot is transferred to a separated furnace, heated by oil or gas.

The following elements may be used to determine the likely composition of the metal.

By its use[edit | edit source]

This is the easiest method to make the mold. It is used especially in India, Egypt and sub-Saharan Africa (Cameroon, Benin, ...) but only gives a quality with poor surface finish. We prepare by making the ground surface flat, kind of a flange. The marmitemodel is filled with sand, well tamped with the rammer. It is made on top of it, with the opening downwards, we will have a part of the sand emptied in order to reduce the weight. Insulation such as talc or crushed wood ash is sprinkled on the mound which is also formed. A frame is placed around the pot as a model with sloping channel and a tube or a round brush, model for the flow channel. The molding sand is packed into the frame. We fix with some strokes the position of the frame relative to the sole. The frame, which accompanies the pot is unmoulded, the model is separated from the mold frame. Finally the frame is again placed on the sole and the sod takes care of the repérage. The process is illustrated in the appendix. 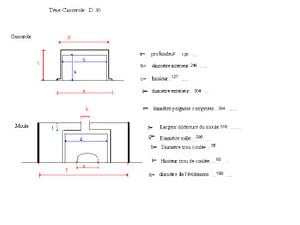 The literature on the subject often suggests ancient formulas for this fabrication, which sometimes seems anecdotal on one side, but effective, using a mixture of sand, clay, graphite, bran, and cow dung.

Appendix 6: Color of metal depending on temperature[edit | edit source]

Appendix 7: Test of source casting of a skillet[edit | edit source]

The casting test was carried out on a skillet of the model Tefal1 by means of two frames.

Mold for the skillet Figure 37 represents an unfinished molded pan from Yaounde and the replica of this was made in Belgium and and its description is given above as well as the used mold. Description of the test: source casting of a skillet of this type. Sheet of the test: Item: skillet Dimensions: Ø exterior 260 mm H 20mm handle Al + plastic L, 170 mm, slightly inclined l, 25 mm riveted base thickness 3.5 mm slightly sloping lateral sides, height: ~20 mm Model: skilet of Tefal/Armatal brand 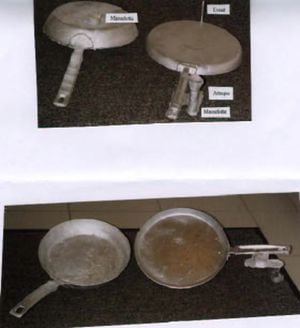 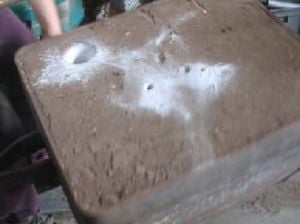 Flow channels: half-cylinder Ø 18, L 65 Attack of channel at a right angle to the handle, length 16 connected to the handle on a width located 50 to 90 from the end of the handle. Event: on the opposite side of the handle, Ø 5 L 70 Vent smooth surface on top of 18 Surface ext. and bright interior 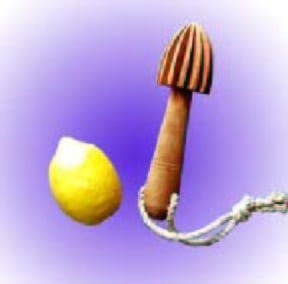 This current file was focused mainly on the manufacturing of kitchen utensils for pots. The suggested techniques can be used for much more products, such as for: