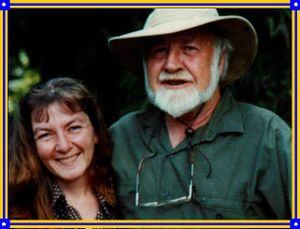 photo of A Sampson-Kelly and Bill Mollison Photo courtesy: PermacultureVisions.com

A Sampson-Kelly started in permaculture in 1991, she did her PDC with Jude and Michel Fanton in 1994 in the Blue Mountains. In 1994 she founded PermacultureVisions.com - an on-line teaching project serving over 30 countries in a time when the Internet was very new. The project was considered impractical and ill-founded but quickly proved its usefulness by meeting people in remote areas.

Another key influence in 1996 was the presentation of the concept of Student Focused learning which helped define the organic processes used in permaculturevisions.com teaching methodology. She met Esther Deans in 1998. Esther came to her site and inspired her in her permaculture work. She met Bill Mollison at the International Conference in 1986. Other key people in her work are Janet Millington, Robyn Clayfield and Mary Darcy. She has designed for a commercial projects in Malaysia, a large (6000 acre) mixed farm in Tamworth and several home sites in NSW.