Showers account for 18 percent of residential indoor water use. [1] When you consider that the United States uses nearly 1.2 trillion gallons of water a year just for showering, [2] it is easy to see why low-flow shower heads can have a big impact on water consumption and efforts to conserve water at home. (To put this figure in perspective, 1.2 trillion gallons is enough water to supply the water needs of New York and New Jersey for an entire year!) [2]By simply switching to a low-flow shower head everyone can participate in water and energy conservation.

Congress passed the Energy Policy Act (EPAct) in 1992, which established production standards for water efficiency, effectively outlawing all plumbing fixtures in the U.S. which did not meet the prescribed benchmarks.[5] Prior to the EPAct, normal shower heads sprayed water at between 5 and 8 gpm. The EPAct set the national standard at 2.5 gpm, with the hope of halving shower water consumption.[1] The limitations on shower head spray in particular were met with public disapproval. Many Americans complained that decreased shower head flow would not allow for adequate pressure to wash out shampoo or relieve stress. This social stigma surrounding low-flow shower heads led manufacturers to find creative ways to circumvent the new national regulations. Some manufacturers even went so far as to put directions on how to remove the flow restrictor piece from their shower heads on the packaging.[1] Thus, while federal law requires that all shower heads have a gpm rating of 2.5 or under, many Americans continue to consume more than the legal limit by removing the small washers in their shower heads that restrict flow, or even installing more than one shower head in their showers.

The U.S. Environmental Protection Agency (EPA) launched its WaterSense Program in 2006 to encourage consumer awareness for water efficient products. WaterSense, in partnership with independent third-party organizations, tests and certifies home products that meet its water efficiency criteria. Some of these criteria include: that products are 20% more efficient that other products in the same category, realize water savings on a national level, and work as well or better than comparable, less-efficient alternatives. In addition WaterSense has a performance criteria to ensure that shower heads are not only efficient but also work well. Starting in 2010, WaterSense labels appear on low-flow shower heads, along with bathroom sink faucets, toilets, and urinals.[2] It is important to note, however, that WaterSense considers low-flow shower heads to have a gpm of 2.0 or less. For more information on the EPA’s WaterSense Program

Water is the quintessential liquid that supplies all living beings with the hydration necessary to survive. In our modernized homes it is easy to forget that the water flowing from the tap originated in riparian ecosystems or underground aquifers that are being severely impacted by our casual over use of water. Indeed, in the United States alone we consume approximately 340 billion gallons of water from streams, reservoirs, and wells everyday.[6] While a great majority of that water goes to crop irrigation, the easiest way we can make a difference in water consumption rates is within our homes. 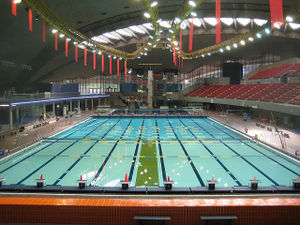 [7]If everyone in the US switched to 1.6 gpm shower heads we could fill more than 1 million Olympic swimming pools with the amount of water saved in one year.

Showers account for 18% of indoor water use in American homes.[6] The average American showers everyday for about eight minutes, consuming 20 gallons of water.[1] Since 1992, federal regulations have required that manufacturers produce shower heads with maximum gallons per minute (gpm) ratings of 2.5 gpm. By switching to a WaterSense approved shower head, an eight minute shower would consume 16 gallons of water, a 20% reduction from the standard [1]. If an individual showered everyday, using a 2.0 gpm shower head would lead to 1,460 gallons of annual water savings. However, going one step further and changing to a low-flow shower head with a 1.6 gpm rating would save 7.2 gallons a day and 2,628 gallons a year compared to a standard 2.5 gpm shower head. Multiply that by the number of residents in your home, and the savings in water consumption and cost really add up! Then, consider the savings on a national level: Let's assume there are about 300 million people in the US. 2,628 gallons x 300 million people= 788 billion gallons of water saved in a year! That much water could fill more than one million Olympic sized swimming pools.

Flow restrictors are small (about the size of a U.S nickel or quarter) plastic or metal discs used within shower heads to limit the amount of water that is able to pass through the unit. (See photo) 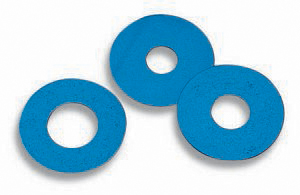 Flow restrictors are an inexpensive tool used mostly to convert older high-flow shower heads to conform to the laws requiring lower flow rates. The problem with flow restrictors comes from how the shower heads operate under these choked conditions; these models were not originally designed to function properly with these lower flows and the result is typically a meager and inadequate shower. It has been noted by those who study low-flow shower heads that disc inserts have a poor acceptance rate by bathers and are typically not used by experienced conservation managers.[8] The solution for most consumers, as noted above, is to simply remove the flow restrictor, which in turn defeats all efforts to conserve water and actually permits flow rates that are illegal in the U.S.

When looking to purchase a low-flow shower head be advised to avoid units that achieve flow rate through the use of a flow restrictor; high-quality models generally do not contain a removable restrictor disc and rely instead on the technological advancements in shower head aeration and other innovations.

Aeration (also called aerification) is the process by which air is circulated through, mixed with or dissolved in a liquid or substance;[11] in a shower-head, aeration works by mixing air into the water stream.

Due to its higher oxygen content aerated water is lighter and also less dense than non-aerated water. Aerating water makes the volume of the water increase, making the droplets of water smaller and thus able to cover more area; essentially, with aerated water, less water can be used to wet the same amount of surface. According to Dr. Jie Wu, a leading developer behind shower head technology, aeration makes the water more like wet pockets of air, “Through aeration, we make the water droplets in the stream hollow and the bubbles expand the volume of the shower stream.” [12]For the bather the aerated water gives the same sensation and satisfaction as non-aerated water. Aeration is the most popular and efficient method of reducing water consumption in shower heads; aeration alone can reduce water consumption up to 30 percent. [13]

A criticism of aeration has come from the fact that aerated water loses heat faster than non-aerated water. Alan Meier noted this effect in a column for Home Energy Magazine On-Line, “Aeration is often used in the low-flow shower heads to give them extra body, but it results in rapidly declining temperature between the time the water leaves the shower head and hits the body.”[15] The disapproval arises from the fact that more hot water is used; Meier claims, “Without knowing it, many users raise the temperature of the water 1 deg. F to 10 deg. F to maintain the same 'impact temperature'.” [15] The Pennsylvania State University, however, has come out against this criticism, stating in an article titled “Household Water Conservation”, slightly hotter water does not negate the substantial savings achieved by low-flow shower heads. [16]

A pressure compensating flow regulator essentially functions through the expanding and retracting of a particular O-ring against a precision profile. In this way the flow opening automatically changes depending on the distribution pressure. [17] This flow regulator allows the shower head to adjust to the specific water pressure of the place where it is installed.

The pressure compensating flow regulator is a feature on low-flow shower heads which allows the shower head to maintain the same flow rate over a variety of water pressures. Many low-flow manufactures believe that failure to incorporate such a mechanism will result in a disappointing showing experience for many users. [15]

The best shower head designs deliver nearly identical flow rates within the typical pressure range of 40-80 PSI. For example the Evolve Roadrunner 1.59 GPM shower head has less than a 6% flow variance within this pressure range. [18] 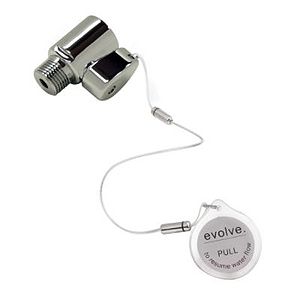 Another innovation that is used in many low-flow shower heads is a simple 'on-off switch' located on the shower head itself. These switches allow the user to pause the flow of water while they wash their hair or lather up. While this innovation does not actually lower the rate at with water exits the shower head it still has potential to conserve water.

SmartStart on the other hand is an innovation that allows the user to run the water only long enough to warm up before they get in the shower. So if you are the type of person who turns on the shower before you get in to allow the water to warm up this could help you save water. The technology knows when the water reaches bathing temperature and shuts off automatically. When you are ready for your shower there is a simple lever to resume the water flow. [20] For more info on SmartSmart click here

Check out WaterSense's product search page for the most up-to-date information regarding highly efficient and high performing shower heads. 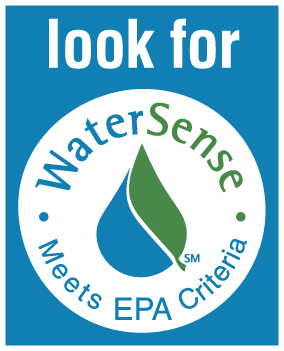 1.Turn on the shower how you normally would when you take a shower
2.Using a one-gallon jug and a watch with a second-hand, time how long it takes to fill the jug under the flow of your shower head.
3. Do the math to calculate your flow rate, if it takes 60 seconds, that's one gallon per minute!
GPM = 60 (number of seconds in a minute) / how many seconds it took to fill a one-gallon container

As population continues to grow and impending global climate change brings new environmental challenges, water demand will also increase in the future. Indeed, research indicates water demand is currently exceeding supply, making conservation efforts crucial if we hope to maintain an adequate water source. Rolston St. Hilaire (2009) of New Mexico State University asserts, “The lack of water has the potential to jeopardize our food supply, disrupt fragile ecosystems, alter alliances among constituents, and threaten our way of life.” [27] Thus, to avoid the possibly catastrophic consequences of squandering our much needed water supply, the public must assume an active role in conservation. Helen Ingram (2009) of University of California-Irvine reports that following extensive studies on local, regional, and global water use, a team of scientists concluded that, “A crucial part of the path to water conservation involves paying close attention to the dimensions and scales that define how people interact with and understand water.”[28]

In essence: start small. Changing your shower head to a low-flow alternative is a quick and easy way to start on the personal path to water conservation. Federal programs like the EPA’s WaterSense make low-flow shower heads accessible, while new technologies like water aeration devices and screw turbines give low-flow shower heads comparable pressure to the luxury of higher gpm heads. If you are building or remodeling a deluxe new bathroom, top end premium shower heads can meet your spa like needs. On the other hand, if you are attempting to retrofit your home to save money, simple add on kits make updating your shower head a logical, inexpensive option.

The following presentation was made for this research project.

This resource manual is useful for more then just upgrading your shower heads.