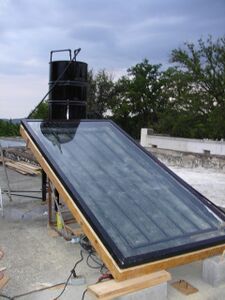 "english" was not recognized as a supported language code.

Parras de la Fuente is a desert oasis town of about 44,000 residents located in the south of the Mexican state of Coahuila. Along with textile manufacturing, tourism is one of the main industries in Parras. Tourism has become increasingly emphasized after Parras's designation as the "primer pueblo mágico del Norte de México." Parras is warm in the summer, and cooler in the winter, but temperatures rarely fall below freezing, snow falls once every several years.

City water flows into the rooftop system through exposed metal and PVC pipes.

When the 2006 project team first visited the house, the system was not functioning. The PVC pipe which should have been carrying antifreeze from the glazed (see definition below) solar collector to the heat exchanger unit had ruptured and therefore thermosiphoning could not occur. Despite the disabled status of the solar hot water system, the valves were still configured for water to flow from the street, to the roof, through the disconnected heat exchanger system, and into the gas water heater. The water’s flow through these pipes and systems actually heated it somewhat, presumably because of heat absorbed by the pipes and exchanger, all painted black.

Glazed
Covered with glass. In the Zaragoza collector, this refers to the glass lid of the wooden box which holds the copper pipes.

*measured after 20 liters of water had passed through system

*incorrect reading due to reversed polarity on thermocouple

The use of a solar hot water system is beneficial because it reduces the dependency on fossil fuels, and does not produce any pollutants. However, the system would only be considered a practical application in Parras if it was also cost effective. Many households in Parras use their hot water heater in a “on demand” fashion, the boiler is only turned on just before a shower. Natural gas is inexpensive, and the use is minimal, making it difficult for the solar system to compete with. The solar water system is capable of heating 28 liters to the desired temperature of approximately 40°C and then starts to drop off rapidly. The water from the street was 29°C so the system is capable of raising the temperature of 28 liters of water by 11°C. The cost effectiveness of the system was determined by estimating the cost of using the boiler to heat 28 liters of water 11°C. The density of water is 1 kg/l, so the mass of water heated is 28 kg, the energy needed was determined by:

According to gru.com natural gas water heaters have an efficiency of .54 so 2387 kJ are needed to heat the water. The amount of energy in natural gas is 50MJ/kg or 50,000 kJ/kg (from yesican-science.ca) the mass of gas needed is:

The cost of gas in Parras is 25 kg for 280 pesos, so .048 kg costs .54 pesos. If the system was capable of going through a complete heating cycle two times a day is still would only save about a peso a day. At a cost of about 3,000 pesos it would take over 8 years for the system to pay for itself, which is most likely longer than the life of the system.

In 2008, The total savings have been low and while the current resident enjoys the system, the resident would rather sell the water heater for the price of the copper in the system as that would result in a higher return.