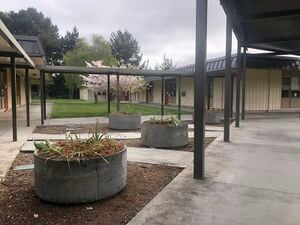 Triangle of Death as of February 2021
Project data
Device data

Zane Middle School, located in Eureka, California has a diverse student body of approximately 600 students. Their academics focus on Science, Technology, Science, Art, and Math (STEAM). In a centrally located, high traffic area of campus, hallways coming from three different directions diverge, creating a triangle of space. This space is referred to as the "Triangle of Death" due to the unappealing appearance and lack of purpose. A picture of the area before the project is seen below. There have been several attempts to improve the area, none of which have been successful or withstanding due to various factors including safety and incompleteness. A counselor at Zane Middle School, Trevor Hammons, was interested in having the "Triangle of Death" area improved. Team Triangle of Life consists of four Engineering students (Elizabeth Odell, Jake Reeser, Julia Iman, and Vincent Mendez) from Cal Poly Humboldt's ENGR 215 class. The Triangle of Life team worked with Zane Middle School and Trevor Hammons to design and implement a solution to the "Triangle of Death".

The objective of this project is to create a solution for the area known as the "Triangle of Death" with something safe, cost effective, more visually appealing, and long lasting. This new area will be more interactive and educational for the students. The design will make sure that students are unable to climb on the roof or disassemble the project.

Prototyping was an integral step in the design process, as it provided key insight into the possible outcomes of our design. The prototypes range from physical representations and research to computer generated drawings.

The Autocad drawing prototype depicted in the image to the right provided a more realistic vision of what the planters would look like configured in the chosen configuration. This prototype was to scale so it also provides important details on the finished product.

The image to the right depicts a prototype of the attachment between a bench and the planters. We found through the prototyping that a planter bench would not be feasible for the allotted timeframe.

Steps demonstrating how the final design was implemented are shown below.

The total cost of materials was $ 872.77. Total hours spent on project was 230. All of the cost was donated by the following local businesses: Hilfiker Retaining walls, Redwood Energy, and Alves inc. This is a list of the teams materials and cost of them. The team was able to get all of it donated except for $10.00 for the White Current. All of the materials can be seen in the table below.

The project was designed to have as little maintenance as possible, and that was successful. The instructions of what to maintain and how to maintain the area is described in the below sections.

The work required to maintain our project can be shown in the schedule below.

Several tests were performed in order to optimize the results of our design. One of the firsts was the small model of circular planters. A smaller version of the Triangle of Death site was created from cardboard and paper and circular planters were made from paper and succulents. This was a test to see if the circular planters would be visually pleasing on the triangular plots of land. The geometry proved to be aesthetically pleasing. Another early test was the cardboard footprints of the planters. Four cardboard cutouts of circles, four feet in diameter, were configured in 4 different ways and photographed so as to be voted on by the client and members of the community. Both the client and the popular vote decided on configuration 4 (pictured in Prototype section). Another important test tested a possible attachment of a bench to the circular concrete planters. This attachment was created using a steel plate, nails, and wood. This test proved that this would be a time consuming process. Also, observations of the students during the school day led to findings that even when students are near a bench or lunch table, they choose to stand and talk with their peers.

The result of the small circular planter model provided us an idea what the overall visual of circular planters would be, and we all found the circular planters to be aesthetically pleasing when placed on the triangular plots of land. The test involving cardboard footprints of the planters being placed into four different configurations made it obvious which configuration would be the most visually appealing. This prototyping helped secure the exact placement of the planters to avoid moving around extremely heavy planters to test different configurations once they had arrived. The bench planter attachment test proved the process to be tedious and time consuming, causing us to factor in the timeframe of our project. This testing and the results of student observations are what ultimately led to the decision to avoid the installation of benches onto the planters.

One of the main mistakes made during this project is when the planters were being installed, a corner of the pathway was crushed by the forklift. This can be seen in the image below. From this, it was learned that extra caution should be used when using heavy equipment on concrete. It was also noted that unfiltered soil may not be ideal for planting due to debris such as glass, rocks, or metal objects.

Something that will be added onto our project in the future will be the painting of the sides of the planters by the Middle School students to be the school colors of Zane Middle School. Another possibility of something that will be added in the future is the addition of mosaics on the sides of the planters that match the mosaics of other locations of the school.

Some possible problems that may arise and the suggested solutions can be seen in the table below.