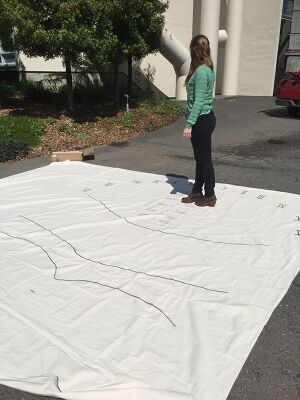 Catherine Zane Middle School in Eureka, California, has partnered with the Engineering Design course at Cal Poly Humboldt in order to provide an opportunity for students to exercise their skills in sustainable engineering design. Our project team is called Division by Zero. Team members include Hannah Gidanian, Caitlin Gundert, Rick Thomas, and Alex Watson. The front of Zane Middle School features a large rectangle filled with bark mulch, 10 feet wide and over 100 feet long. This empty space receives a large amount of uninterrupted sun throughout the day. Zane wanted to improve this underutilized space and decided that a series of projects would be conducted by the Engineering Design class of Spring 2017.

Students at Zane Middle School currently do not have an interactive and tangible way to learn about the abstract idea of how the sun relates to the earth and the concept of time as a derivation of this relationship. There is a large, vacant section of the front of the school at Zane that has not been serving any purpose over the past several years. As a result, the bark mulch gets trampled across, leaving debris all over the pavement in front of the school.

A group of four Engineering Design students, by the team name of "Division by Zero" have partnered up with Trevor Hammonds and Kristopher Buihner at Zane Middle School in order to implement an interactive and aesthetically pleasing addition to the school front, directly in the center of the previously barren rectangle filled with bark mulch. The analemmatic sundial is stamped in a 9'x10' platform of cement on which middle school children serve as the gnomon. The student's shadow will tell the solar time. This sundial will serve to provide middle school students with an educational activity to emphasize the concept of solar time and the interaction between the sun and the earth in its orbital path.

Many prototypes were made before placing the sundial in concrete. Prototyping on a canvas sheet proved effective. 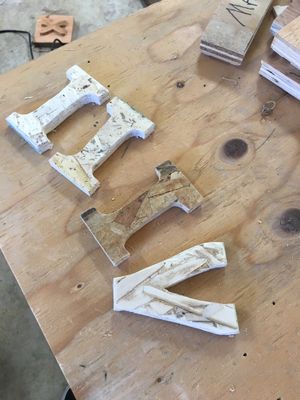 Cut out outlined Roman Numerals from 1/2" Plywood. Sand and round all of the sharp edges. Keep the numerals that are being used in one stamp together to ensure a similar size fit.
2 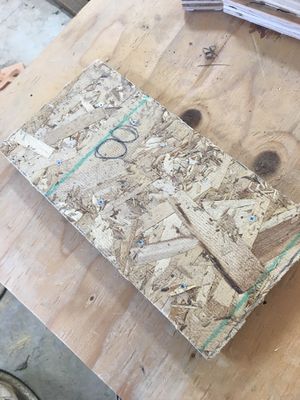 Cut out the square base of stamp from the same size plywood. Again, sand and round all edges.
3 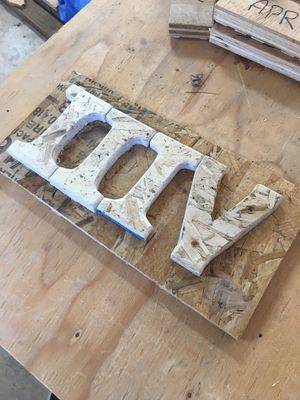 Attach Roman Numerals to the base using 3/4" wood screws. Make sure to place roman numerals backward so that the impression of the stamp will be correct.
4 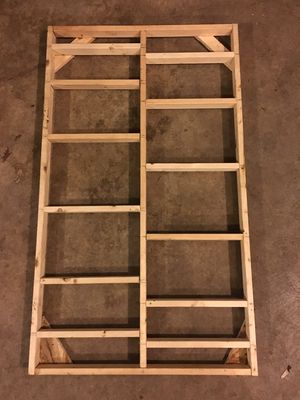 Cut and attach 1" x 2" pieces of furring strips to make the frame for the standing locations. All measurements should be to the center of each piece of wood
5

Glue two pieces of pre-made wood letters together to make them thicker.
6 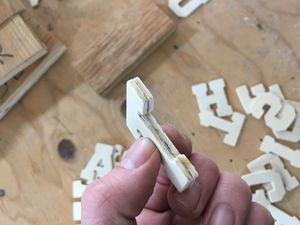 Cut and attach 1" x 2" pieces of furring strips to make the frame for the standing locations. All measurements should be to the center of each piece of wood
7 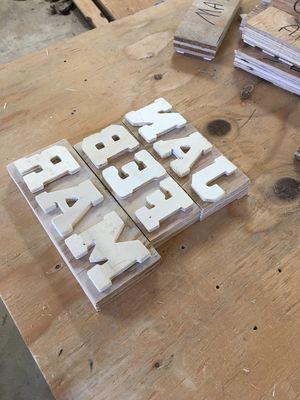 Glue the letters of the abbreviated months onto a plywood base. Make sure to reverse the letters for the same reason as before
8 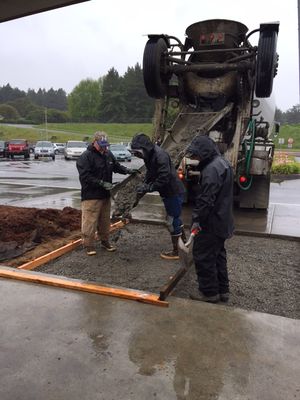 Create a form with plywood and fill five inches with base gravel. Fill the form with cement.
9 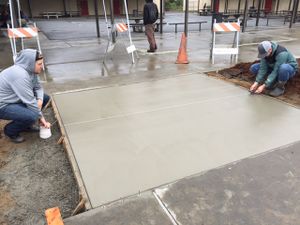 After the concrete has been poured and smoothed out, allow the concrete to cure for 30 to 45 minutes. Begin laying out center string lines.
10 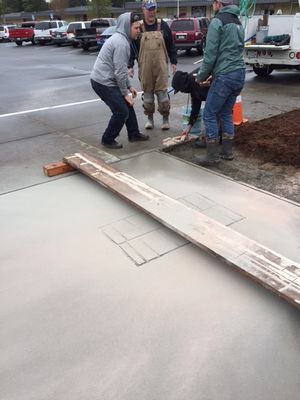 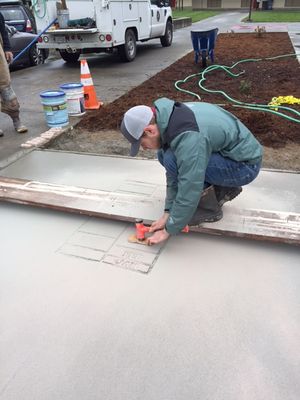 Stamp all abbreviated months in the center of the corresponding box.
12 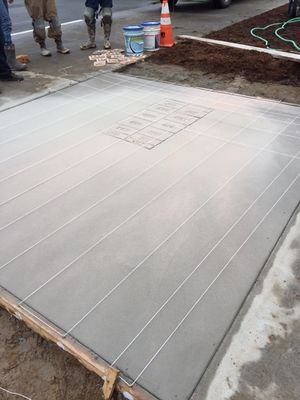 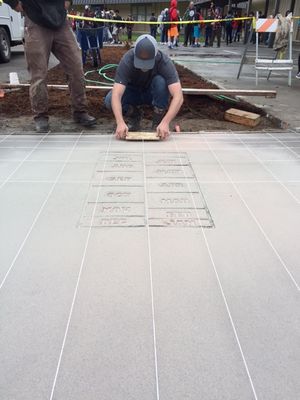 Stamp all of the numerals by lining them up where the corresponding strings cross.
14 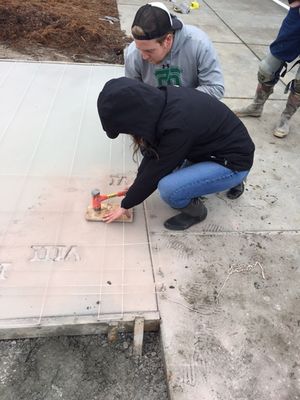 Be sure to use consistent pressure while stamping to ensure the depth is the same.
15 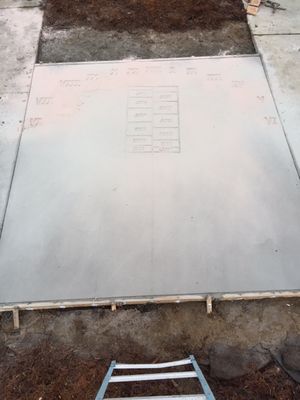 Allow the concrete slab to cure for 24 to 48 hours.

How to Use it[edit | edit source] 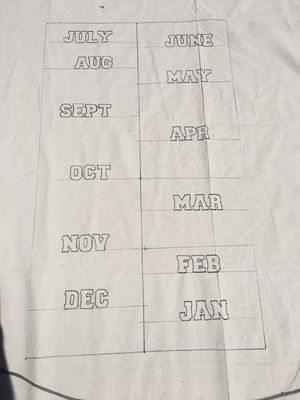 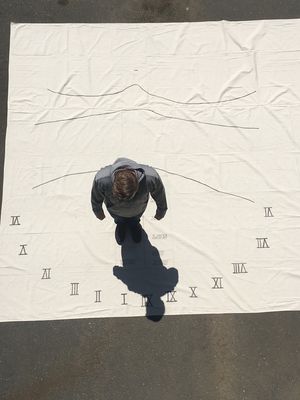 Face forward and stand up straight, then determine the time from the location of your shadow. Remember if daylight savings time is in effect, the sundial will appear to be an hour behind
3 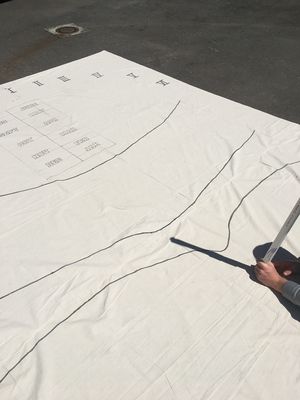