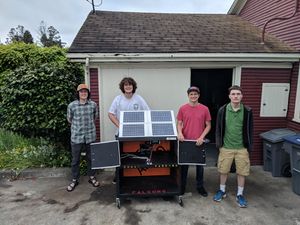 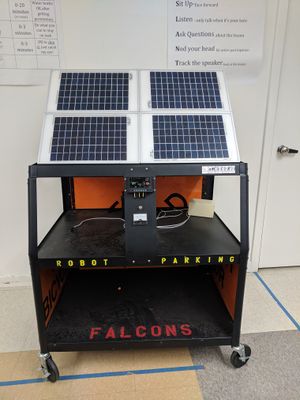 The purpose of this project was to troubleshoot the previously made solar robot charging station and find out why it no longer worked. The client requested that the station be made waterproof after getting the it back in working order. The station will be re-implemented at Zane Middle School in a classroom and will recharge the classes robots. The station is designed to inspire the children at Zane Middle School and spark their interest in renewable energy. The final product is a working solar robot charging station that is resistant to water.

Team Wooden Lions was formed during Lonny's Spring 2018 Engr215 Introduction to Design course at Humboldt State University to come up with a solution to fix a solar robot charging station from a previous ENGR 215 class. The station was used in a classroom at Zane Middle School in Eureka, California to recharge their robots, introduce renewable energy principles, and provide an educational and inspirational impact on the middle school students. After a few years of use the station no longer worked after being left out in the rain. Team Wooden Lions were tasked to troubleshoot the station to figure out what was wrong with it and then get it back in working order. The station was made to be waterproof to ensure it does not meet the same fate as before.The team also worked to improve the station where possible outside of the client's requirements.

The station needed to first be made operational again and then made waterproof as it is subject to coastal weather conditions. The team's budget is $325 and needed to be completed by May 2018. After meeting the requirements, our team worked to improve the station in new ways determined by our team. Below is a list of criteria that both meet the clients needs and the team's improvement goals.

The solar powered robot charging station consists of the basics needed to generate solar energy. Four solar panels are mounted to the top of the station, which is connected to the charge controller that regulates the charging of a power-storage battery. The charge controller is used to protect the electronics by regulating the power delivered to the devices and keeps them from overheating. The charge controller also provides the level of charge that the battery is at. The battery is a 12v, 35Ah, deep-cycle solar battery. All the electronics are routed together through the bus bar which then goes through a voltage regulator to bring the voltage from the 12v battery down to a usable 5v for the usb and robot chargers. Everything is housed in a metal tv stand that is waterproofed by epoxy in the gaps. A door and lock was installed on the front to protect all the electronics from theft and water damage.

Ten designs have been written up in order to come to a decision for the final design.

This is a table explaining what we spent on the station and where we got the materials used. 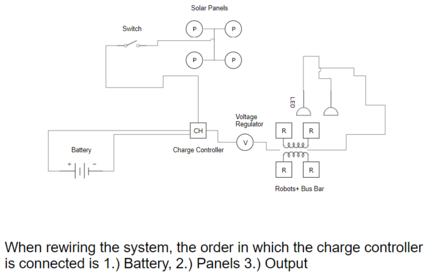 The previous station was poorly maintained and is one of the reasons why it failed. This section will include how to keep the station working for years to come.

-Connect trickle charger to battery first, then plug in. When both lights are green the battery is charged

If the charge controller needs to be unplugged, Remove consumer wires, negative and then positive. Then the solar panels in same wire order, and lastly the battery in same wire order. (Refer to circuit diagram) 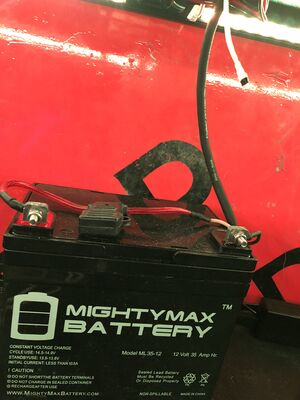 Picture of Battery
Hook up positive clamp (red) of trickle charger first to the positive terminal on the battery.
2 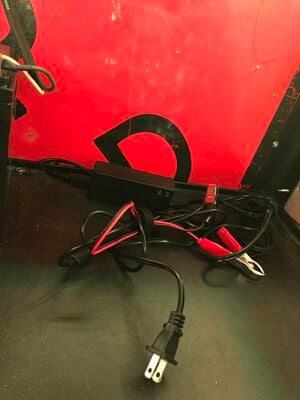 Picture of Trickle Charger
Hook up the negative clamp (black) to the negative terminal on battery.
3
Plug in the trickle charger to an outlet.

Our team successfully fixed and made the station waterproof so it should last into the extended future with proper maintenance and care. The base of the station is extremely sturdy, being made of all rustproof and weatherproof material. Zane Middle School will need to follow the maintenance procedures, as well as replace parts when necessary. Team Wooden Lions was excited to begin the project and is excited to see it in use after working hard to restore the solar station. 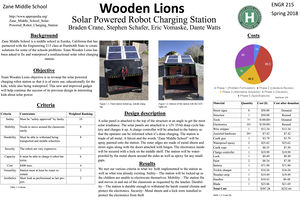 An upgrade that could be done to the station that would vastly increase its versatility would be to install an AC inverter. Doing so would allow for anything that has a plug to be used with the station. If an inverter is installed, a larger battery storage may be useful if the currently installed one needs to be recharged too often.

Security could be improved by replacing all the screws on the station with security screws thus making it less likely to be taken apart and having its contents stolen. A bigger chain and lock could also be installed to the station as well as thicker or stronger metal on the sides.

An RC system could be incorporated into the design to make moving the station as easy as possible and powered by the battery already installed on the station.

One idea our team had that we did not get to implement would be to install more types of renewable energies on the station such as wind power, hand crank, etc. This would likely be more of an educational aspect as they would be small scale but it would further educate and interest the children in clean and renewable energies.