The purpose of this project is to develop a Scaled Planetary Solar System (SPSS) for students to understand the vastness of outer space and the sizes of the planets relative to each other. In Spring of 2019, Team Polaris was united in Engineering 215 Intro to Design class at Humboldt State University, to work with Catherine L. Zane Middle School Representative Jeanne Wilhelm.

The objective of the Scaled Planetary Solar System is to engage the students, provide a physical representation and supplement their learning of the Solar System. The following table describes the criteria with respect to their weight. The criteria was established with regards to the school policy and Zane Representative Jeanne Wilhelm. 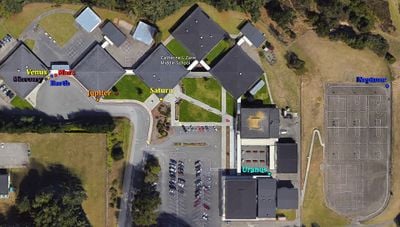 The final project consists of two models. The 2D models and the 3D models. The 2D models are planets and their names painted on the ground with respect to their 3D models. Every 2D model is painted at its location as seen above. The 2D models serve as markers for the 3D models. The 3D models are made of plywood, PVC, marbles and ping pong balls. The smaller planets Mercury and Mars are constructed out of glass marbles because glass marbles closely fit the scaled sizes for these two planets. Venus and Earth were created with ping pong balls due to the same reasons as Mercury and Mars. The large gas planets Jupiter, Saturn, Uranus and Neptune are composed of plywood due to its low cost, sturdiness and lightness. Each gas planet requires two scaled mirror disks. Each disk is slotted down the middle to fit its mirror disk. The two disks are then slotted together. Jupiter and Saturn maintain their collapsible disk feature for easy storage. Uranus and Neptune were made permanent due to their small sizes using epoxy. Every planet is glued onto a wooden dowel which is also epoxied into the PVC poles to increase the strength of their mounting points. The PVC pole of every planet is 5 feet long to allow easy observation for a large group of students with a variety of heights. All the planets are then fitted onto the bases. 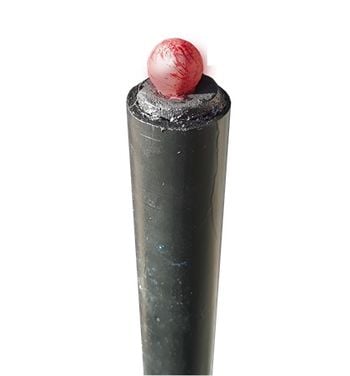 Close up of Mars mounting point.

Every base is made of two mirror planks of plywood for the same reasons as the planets. Similarly, to the gas planets, each plank is slotted multiple times in the middle. The center slot for the planks accommodate its mirror plank in a perpendicular pattern. The offset, center, dual slots accommodate the PVC inserts. Each PVC insert helps provide support for the PVC poles of the planets. 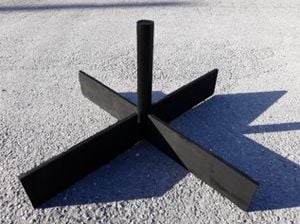 Base assembled with PVC center insert.

The Sun is made out of 4 by 8 feet plywood panels and has been framed on the back with 6 feet long two by fours. Only half the sun was cut out of the panels because it was far too large to make a full circular sun. The Sun will be mounted next to Zane Representative, Jeanne Wilhelm’s classroom.

The Scaled Planetary Solar System is set to two different scales. A scaled distance from the sun and another scale with respect to each other. Mercury and Mars are made from glass marbles. Earth and Venus are composed of plastic ping pong balls. Jupiter, Saturn, Uranus and Neptune are made from quarter inch thick plywood. All the planets are painted with respect to their colors based on photos from National Aeronautics and Space Administration (NASA). The structural post of all the planets are made from quarter inch thick PVC pipe. Every PVC pipe has a diameter of one inch, a four-inch dowel insert at the top of to fit the respective planet using Epoxy.

How to Assemble[edit | edit source]

Locate Base and 1ft PVC

Insert top base piece into slat of bottom piece and insert PVC into the 4 top notches.

CONDITIONAL If planet is a gas giant, insert free planet plate into slit of attached plate.

Place assembled model on designated location on the Zane campus.

The following is the maintenance schedule for the Zane Scaled Planetary Solar System. Maintenance for this project is relatively low given proper treatment of the 3D planet models, requiring an hour of maintenance every 2-3 years. 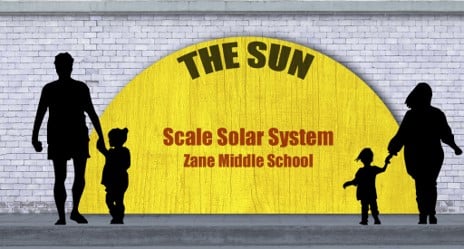 Example of the Suns expected size compared to humans.

The Scaled Planetary Solar System is a supplemental tool to educate the students at Catherine L. Zane Middle School. The models are set to two different scales. The first scale is a ratio of the planets. All the models are scaled with respect to Jupiter. The second scale sets the distance between every model. Team Polaris agreed to the two different scales because if the distance was made small to accommodate the school campus, Mercury, Venus, Earth and Mars would be almost a speck to the human eye. If Team Polaris scaled the models to accommodate Mercury, Venus, Earth and Mars, the sun would be far too big and have no place to deploy due to the increased distance. In addition, Uranus and Neptune would be forced onto the grass field surpassing the asphalt basketball courts. As a result, two scales became the optimal choice to accommodate for all the models. Team Polaris presents the Scaled Planetary Solar System Model to Catherine L. Zane Middle School and hopes the students gain a better perspective of the Solar System.

When selecting wood for the bases, use solid wood planks instead of plywood. Plywood weakens significantly for the bases after the center has been cut. The weakness of the plywood base planks is not an issue unless if a substantial force is applied on the largest surface area, or the face of the plywood plank while laying on a fulcrum.

Apply two coats of appropriate primer to the wood prior to painting. Follow up with as many coats of paint required as well and allow every coat to dry prior to additional coats. Depending on the type of paint used, sanding may or may not be required. If you do need to sand, sand between every paint coat using 100 grit sand paper and finish off the last coat of paint with a minimum of 400 grit, for smooth surface results use 1000 grit to finish of the final coat instead of 400 grit.

For best results in terms of longevity, epoxy paint is the best option. Unfortunately, it's very expensive and is sold only by the gallon locally in Eureka and Arcata, California. For relatively temporary use, spray paint directly on concrete will adhere well enough. Always scrub the intended area of painting with environmentally friendly, heavy duty degreaser. Agitate the concrete with a rough bristle broom and rinse off well with water. Allow the concrete to dry prior to painting.

For best results with clean cuts, always measure twice and cut once. Use chop saws, table saws and jigsaws for fast, easy cuts. Follow up all the edges with an orbital sander armed with 100 grit and then 400 grit sandpaper to smooth everything out. Use a file to smooth out the slots made in the bases.

If you choose to glue anything onto polyvinyl chloride (PVC), ensure you have the correct glue that will adhere to PVC. Always glue prior to painting because the glue may strip the paint. If you have concerns about sanding any decorations glued onto the PVC after painting, use blue painters tape as a place holder for the decorations or tape over your decorations with a minimum of two layers. Strictly sand by hand for best results.