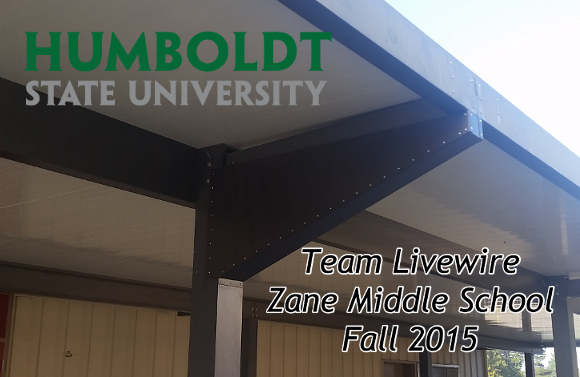 The purpose of this project is to solve the awning drainage problem at Zane Middle School. Team Livewire created a replicable, integrated gutter box called the Streamline which is installed between the gutter downspout and serves as a direct drain and a surge tank. The Streamline, if deemed successful, will be implemented on other awning rainwater drainage systems throughout the campus.

Team Livewire consists of Abraham Audermauer, Ahron Cervania, Jake Cooper, and Zachary Ramsey. The storm water drainage system located around the cafeteria courtyard awning at Zane Middle School in Eureka, CA has proven ineffective. Initially the gutter system overflowed during rainstorms. To remediate the system’s inadequacy the gutter caps were removed allowing excess water to drain into the courtyard creating waterfalls. Zane Middle School requested that a design be implemented that removed the waterfalls and fixed the initial problem of gutter overflow.

The roof rainwater drainage system at Zane Middle School did not function as needed. The system previously deposited all the rainwater from the awning into the student quad area. The objective of the this project was the modification of the previous system to achieve the total diversion of rainwater from the awning roof surrounding the quad to the main campus drainage system. The following criteria for evaluating the appropriateness of a design was determined through interviews with the administration at Zane Middle School.

The final Streamline design consists of an integrated, powder coated aluminum gutter box. The addition of the Streamline to the drainage system replaces the caps on the gutters, preventing the water from flowing from the gutter system into the Quad. The body of the gutter box is angled at 20o, allowing for faster drainage. The Streamline is also hollow, allowing the internal volume to be used as a secondary surge tank for water in excess of what the downspout is able to contain. The increased head due to the vertical height, that's a result of the surge tank, increases water pressure by increasing the volume of water and consequently speeding up drainage.

This section includes all the associated costs to produce the Streamline. Costs are considered both in terms of man-hours and monetary expenditures. The man-hours are the total number of hours Team Livewire collectively put into the research, development, construction and implementation of the Streamline at Zane Middle School. These hours are summarized in Figure 4. 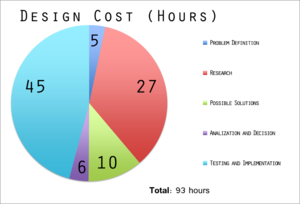 Fig 4: A pie chart summarizing the design hours put into the development of the Streamline

Monetary expenditures include the cost of all associated materials needed to produce the Streamline. An itemized table is provided to summarize the fiscal costs of these materials.

Fig 5: A calculation for the maximum volume of rainwater that could potentially flow through Streamline.

How To Construct Streamline[edit | edit source]

A step by step tutorial to recreate StreamLine.

How to Construct Streamline: 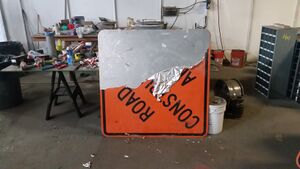 Stripping a street sign.
Strip the 4'x4' street sign of all stickers and residue. This can be accomplished with Methyl Ethyl Ketone, or similar paint strippers.
2 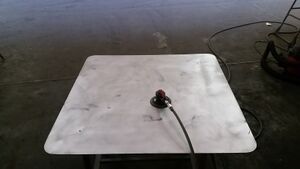 Sanding road sign.
Next Sand the street sign to smooth the surface in preparation of powder coating.
3 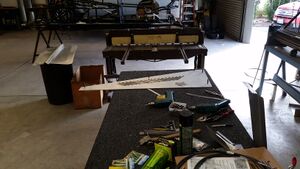 Sheer road sign into shape.
Next draw out all of the pieces to Streamline on the sign and sheer out the necessary pieces.
4 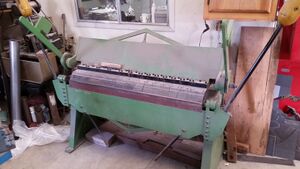 Break for bending angles into sheets of metal.
Using a break similar to the one in this photo, break the bottom section of streamline into its necessary shape. Two 1-inch flanges along the length of the piece at 90 degrees. On the six inch side a 70 degree break at 1 inch is needed. On the 4 inch side a 3inch section must be broken into the piece at 110 degrees.
5 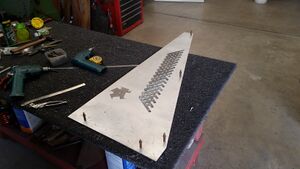 Laying streamline out to drill holes.
Once all of the necessary pieces are made stack the two side pieces. Once stacked fix the two pieces together using clamps. Begin drilling the holes using an 1/8" drill bit.
6 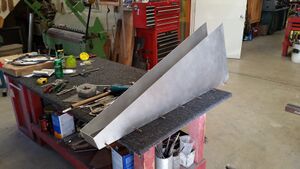 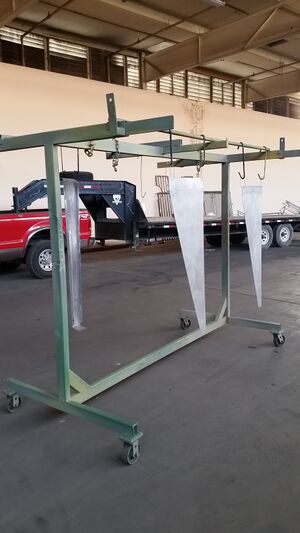 Hanging streamline on a powder rack.
Once the pieces are completed they must be hung and wiped of all dust and debris, to ensure a smooth contact surface for the powder to stick to.
8 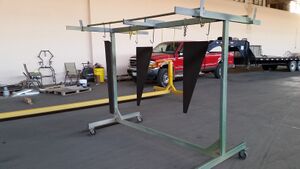 Streamline waiting to enter powder oven.
Now that the powder has been applied to the material, streamline must be baked for approximately fifteen minutes at a temperature of four hundred and twenty degrees.
9 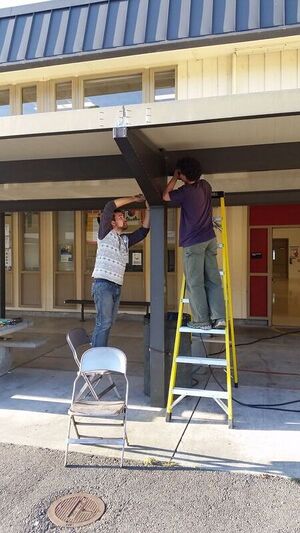 Installing streamline at Zane Middle School
Install streamline by drilling 2" holes in the original downspout and drainage pipe. Allowing for water to flow freely through the system, and capping the chopped downspout.Apply Vulkem 116 to all potential leaks. Then fix the sides to the drainage pipe using self tapping screws.
10 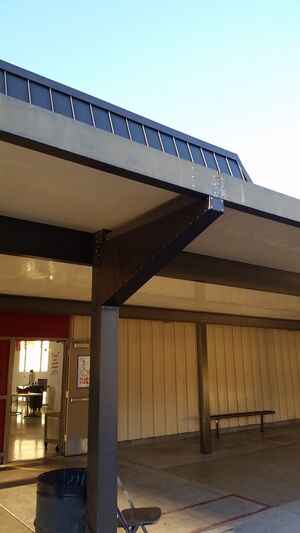 Streamline installed.
Finally Streamline is complete. Allow approximately 12 hours for the Vulkem 116 to dry thoroughly to ensure a good and tight seal.

A video describing Streamline's purpose, function, and how to recreate Streamline.

Once installed Streamline performs with little to no maintenance. In the occasion of a clog the streamline may need to be removed for cleaning. In this case all steps for installation would need to be performed again, including reapplication of Vulkem 116. Streamline was designed to accommodate to maintenance needs. Streamline can be easily snaked, which cuts down on the probability of ever needing to be removed. In the case of a leak, Vulkem 116 may need to be reapplied in order to solve the issue.

Ultimately, to consider streamline a major success, it would be ideal to see the solution implemented throughout the entire quad area. The first iteration of Streamline solved one of the leaky downspouts, not all. Zane Middle School proposed the implementation of the Streamline gutter boxes at all downspouts of the awning in order to ameliorate the poor performance of the drainage system. If the Streamline were to be implemented on every downspout of the awing at Zane Middle School, it would improve the performance of the drainage system and solve the existing problems.