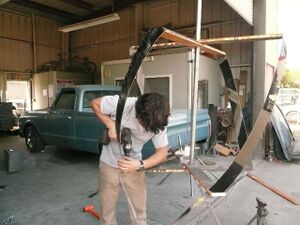 The WindPod Turbine is a vertical axis wind turbine that uses the power of the wind to create energy which is then stored in the 12V battery banks.

The WaterPod Project [1] is a art exhibition and a learning experience that will teach people about alternative solutions to environmental problems and sustainability. The barge will travel around the five burrows in New York harbor with a group of artists living aboard it. The barge will attempt to be completely self sufficient and will stop and each of the five burrows for a period of about two weeks and let people on board to learn about sustainability and alternative solutions.

Team MSB was a group created by the Engr. 215- Intro to Design class at Cal Poly Humboldt to create a structure for the WaterPod project. Team MSB decided on building a wind turbine for the barge to harness the power of the wind. Team MSB consists of members Mario Barajas, Becca Russell, and Sam Speet.

Team MSB sought to create a way to help with the energy needs of the barge using a renewable source of energy. The team decided on using a wind turbine hoping to create enough power to add a sufficient amount of energy to the WaterPod battery banks.

The following is a list of criteria used to decide upon the final design. These were formed based on client and group decisions and are listed in the order of importance decided on by the team.

The WindPod Turbine is a vertical axis wind turbine that uses the power of the wind to create energy which is then stored in the 12V battery banks. The WindPod turbine utilizes the vertical axis because while it is not as efficient as a horizontal wind turbine it requires less maintenance and it is able to catch wind coming from any direction without any needed adjustment. The blades are made of steel reinforced fiberglass. Their are three blades 120 degrees part from each other that catch the wind driving a shaft. This shaft then turns a band on the bottom of the turbine which turns the generator creating power. The entire WindPod turbine is about 13 feet tall and uses guyed wires to help support the structure especially in times of high wind.

With the increase in today's population, the WaterPod set out to find an innovative way to "prepare, inform, and provide an alternative to current and future living spaces." The WaterPod Project. The WaterPod is a group of artist who plan to live on a barge with the hope of living completely self-sustained for 6 months. The barge is planning to depart on May 20th and will travel around the 5 burrows in New York teaching about alternative solutions to environmentally harmful lifestyles and about sustainability. Cal Poly Humboldt Engineering 215 Intro to Design class was contacted to design some of the structures for the artists that will live aboard the barge. Team MSB is a team made by the Intro to Design Class to create a wind turbine that would harness the renewable power of the wind and turn it into energy and help to contribute to the energy needs of the barge to power a projector along with other necessary electronics. The final design was the WindPod Turbine which is a vertical access wind turbine that uses the power of the wind coming from any direction to create energy.

The cost of the turbine was important. We wanted the turbine to be reproduced easily and so the cheaper it was the better. Also the project had total budget of $225. Team MSB wanted to use as many recycled and reused parts as possible not only to save money but to make the turbine more environmentally friendly. The table below is a description of the cost and materials used to create the WindPod turbine.

The WindPod turbine will continue to be tested until it is sent to the WaterPod Project. It will remain on the barge for the 6 months aiding the power needs of the barge. The blade design was the most problematic part of the design process. Finding out the correct way to situate the blades was a process of trial and error. The original blade design was four blades and then it became three helical blades and finally three blades with large surface area. Pictures of the blade designs are shown below.