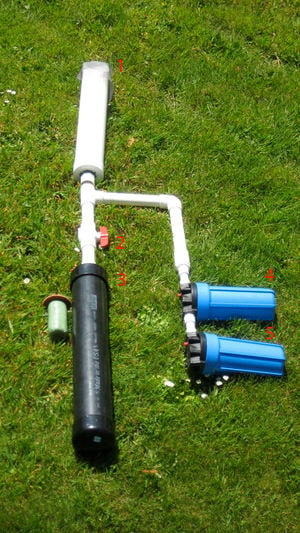 The WaterPod is a project based out of New York designed to be a sustainable, navigable living space, showcasing the critical importance of the environment and serves as a model for new living technologies. It is currently scheduled to launch in New York in May, 2009, navigate down the East River, explore the waters of New York Harbor, and stopping at each of the five boroughs it will dock at several Manhattan piers on the Hudson River. However, The WaterPod needed help developing several aspects of its design, including the processing of drinking water without outside help. To this end, The WaterPod contacted CSU Cal Poly Humboldt's Engineering 215 class. The Fire Breathing Dragons (FBD) are a group of students from Cal Poly Humboldt's Engineering 215 class who have developed a system for filtering rainwater based on the WaterPod's needs. The water needed to be drinkable after coming off the roofs and surfaces of the WaterPod project.

The FBD rainwater purification system exists to provide clean drinking water for the WaterPod Project. The WaterPod is designed to be a sustainable, navigable living space, showcasing the critical importance of the environment and serves as a model for new living technologies. The FBD rainwater purification system uses a sediment filter, an activated carbon filter, and a.5 micron ceramic filter, to help efficiently process water aboard the WaterPod. In addition it uses a First Flush system to remove a set amount of water at the beginning of a rainfall; water that would otherwise contain contaminats and sediment.

The objective of this project is to design a safe, cost effective, durable, easy to use water filtering system that will enable the Waterpod team to have a source of renewable, drinkable water supply.

The FBD Rainwater Purification Project was designed to attempt to meet a collection of criteria. These criteria were each assigned a number according to their importance, 10 being highest and one being lowest, as shown in the table below.

Our final design has two main steps. The first step is to divert the first 3 gallons of rainfall to the first flush to be diverted further into the river or for other unspecified use. The second step is to take the remaining rain and divert it to be filtered for consumption. (See Fig. 1)

The design is takes rain water that has already been caught and putting it through our final design to be filtered for consumption by the inhabitants of the WaterPod. Once the rain water has been caught and diverted to a single location, our final design can take effect. The rain water immediately goes through a 30o self cleaning debris screen. The debris screen mesh size is 1/16 inch wide. The self cleaning takes effect when the water hits the screen with debris the angle of the screen is great enough so that the force of the water pushes the debris down and eventually off the screen. (See Fig. 1, #1) The mesh screen keeps the big pieces of debris out of our design.

After the first flush is full or shut off the water than starts to flow through the filtration process. The system is designed to run off gravity fed pressure. The first two filtration processes happen right before the water enters the first tank (See Fig. 1, #4&5). The first filter process is a 25 micron sediment filter that gets any particle that is bigger than 25 microns out of the water to help deter the second filter from clogging (See Fig. 1, #4). The second filter is a 5 micron Carbon filter (See Fig. 1, #5) The carbon filter is before the first tank because the water is going to be sitting in the tank for an extended period of time, having the water go through the carbon filter will help prevent the stagnant water from growing algae or bacteria. The first tank is pressurized and will pump the water up to the 12 ft. water tower.

From the water tower, the water is once again gravity fed down to the final Ceramic.2 micron filter that filter the water immediately before it goes through the facet where is will be consumed as drinking water by the inhabitants of the barge. The Ceramic filter is the final filter that cleans the cysts, cryptosporidium, Giardia, and reduces turbidity, odor, and taste, out of the final consumable rain water.

The filters on this project should be changed out every six months at least, in order to maintain the quality of the filtered water, as well as avoiding clogging. In some cases the filters should be changed out sooner depending on how dirty the water being collected on a regular basis is. In the case of the WaterPod's rainwater runoff, the estimated time to replacement is still six months, but if used in a different location this replacement time may change.

Discussion and Next steps[edit | edit source]

The FBD Rainwater Purification System has successfully met most of its criteria. Specifically durability, cost, safety, functionality, water quality, and maintainability. The projects filters can be changed out to different grades of filter quality, depending on the project's use. However, it is recommended that filters of at least the quality specified on this page be used if the water is going to be used for human consumption. In addition the size of the project can be changed by adjusting the length of pipe in between each section, making the FBD Rainwater Purification System versatile.