A Walipini is an earth-sheltered cold frame.[1][2][3] It derives its name from the Aymaran languages.[4]

A greenhouse can be built by digging a hole in the ground and covering it with glass. This takes advantage of the heat stored in the earth during the cold season (warmth in winter, cooling in summer). It is an adaptation of the idea of passive annual heat storage (PAHS) to the greenhouse. Therefore very suitable for climates with cold winters. At the depth of several meters, there is very little seasonal variation in temperature. The earth around the greenhouse structure has large thermal mass. 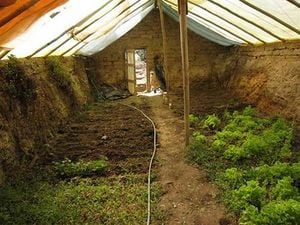 The Benson Agriculture and Food Institute at Brigham Young University examined the concept in detail and has put together a manual with specific designs. These underground greenhouses are called "Walipini" (pit greenhouse) in South America. The Benson Institute's experiment was built in Bolivia, high up in the Andes where it gets really cold. Their greenhouse costs $250-$300 in materials and is designed to provide vegetables year-round for seven people. They recommend a minimum of 94 square feet (less than 8.75m2) of growing space per person. Some Walipini Design Alterations Sugestions have been made.

Mike Oehler of UndergroundHousing.com, described a similar concept in The Earth-Sheltered Solar Greenhouse Book, available here. This is an adaptation from his earlier work on underground housing for residential purposes.