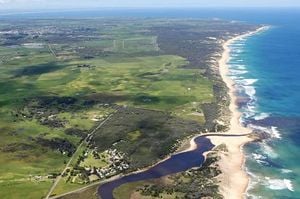 Plans to build a desalination plant at Wonthaggi in Victoria, Australia, were announced by the Bracks Labor government in June 2007.[1]

Information about the plant[edit | edit source]

Controversy about the location[edit | edit source]

Floodwater has again threatened the South Gippsland site of proposed desalination plant. Flooding of the site in 2007 was called a "one-in-100-year" event by the State Government, but water from the Powlett River has flowed again over land set aside near Wonthaggi.[3]

The proposed plant is estimated to need between 90 and 120 MW of electricity to operate.

Comparing the energy consumption of the plant with that required for domestic water tank pumps:

It has been reported that water bills for Melbourne households will almost double over the next five years. Water price plans released by the Essential Services Commission show metropolitan water providers will charge between 87 per cent and 96 per cent more for water. Water Minister Tim Holding, has stated that Melbourne residents need to help pay for major water infrastructure projects, such as the desalination plant and the Sugarloaf (North South) pipeline.[5]

Unfortunately, the community will be forced to pay for the desalination plant, whether they want it or not, without any consultation or serious consideration of alternatives such as domestic water tanks.

"If governments deployed rainwater tanks to 5 per cent of households each year in Sydney and South-East Queensland, dams and desalination plants planned for 2010 could be delayed past 2026 (Sydney) and 2019 (SEQ).

"While 38 per cent of households in Adelaide have rainwater tanks, fewer than 6 per cent of the houses in Melbourne, Sydney, South-East Queensland and Perth do," said ACF's urban water campaigner Kate Noble.

"Rainwater tanks collect and store water far more efficiently than dams, especially in times of drought. As the climate changes we should be installing tanks to take advantage of the rain that does fall on our rooftops.

"If governments systematically installed rainwater tanks in Australia's major cities, we would secure as much water as the planned Kurnell desalination plant in Sydney, the Tugan desalination plant on the Gold Coast and the stage one of the unpopular Traveston Dam proposed for Queensland's Mary River," Ms Noble said.

"We are staring down the barrel of running out of water," says Priestley. Rainwater tanks, groundwater, stormwater, desalination, recycling, new dams, more efficiencies all need to be on the table - "each city has to look at all options, not put a red line through any of them, including recycling."

Page data
Retrieved from "https://www.appropedia.org/w/index.php?title=Victorian_desalination_plant&oldid=657365"
Cookies help us deliver our services. By using our services, you agree to our use of cookies.
Categories:
About Appropedia · Policies · Contact · Content is available under CC-BY-SA-4.0 unless otherwise noted.