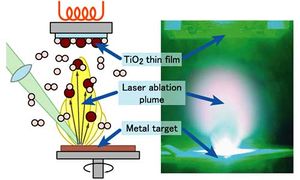 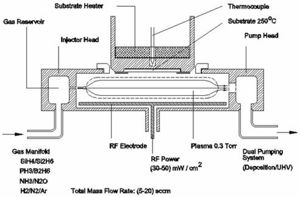 Figure 1. Schematic of a PECVD Process [1]

Vapor Deposition is a processing method to lay a thin layer of a precursor material onto a substrate material to improve its mechanical and chemical properties. Vapor deposition is categorized into two major subdivisions of processing:

Vapor Deposition is an atomistic process in which aprecursorW material is vaporized from a solid or gaseous precursor material and transported in a vacuum in the form of excited atoms or molecules and deposited on a substrateWmaterial where it condenses and is deposited as a thin film. Vapor Deposition was originally 'coined by the authors CF Powell, JH Oxley and JM Blocher Jr. in their 1966 book "Vapor Deposition".[2]

Vapor Deposition processes are highly desired to achieve precise and thin coatings or multi-coatings on a material to enhance properties that are lacking. The application of thin films is ideal by means of deposition because it can be applied to substrates of numerous orientations and complex geometric shapes.

CVD and PVD is highly popular in the semiconductor industry to enhance the conductive and magnetic properties of metals without considerable cost. Deposition films in semiconductors are so thin that the process is extremely beneficial and economic. Deposited Material can be in the form of:

PVD utilizes the principals of thermodynamic by focusing concentrated forms of energy on a solid precursor material. This solid precursor material becomes excited through energy bombardment; Magnetic sputtering, lasers, Arc evaporation. Energy causes bonds to break in the crystal lattice structure and atoms becomes ionized as they are dislodge from the precursor material.[1]The ionized material is released and is transferred by pressure gradient to where it is deposited as a thin film on the substrate material..[3] 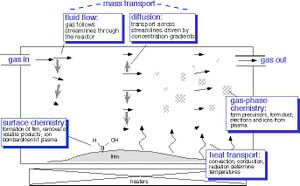 Four main chemical phenomena determine the properties and reactions mechanism for vapor deposition; These include:

Vapor Deposition is performed in a near ideal vacuum environment to prevent contamination. The relative size of the vacuum compared to the size of the vaporized material relative to the distance that precursor material must travel is enormous. The size of the vacuum is highly influential in PVD processes. I.E. Magnetron sputtering continually accelerates particles in a helical fashion. As time increase so does the velocity and energy proportional to velocity. The greater the energy the greater and higher volume of precursor material reacts more for a more efficient thin film deposit. The vacuum allows for control of the amount of input material during processing. System is made up of a deposition chamber, introduction chambers a vacuum pumping system, exhaust system, gas inlet system, and interconnected system of tubes. In addition fixtures and tooling to hold and move the substrates are important to the system design.

There are three major parameters which determine both the deposition density, rate and characteristics of the film 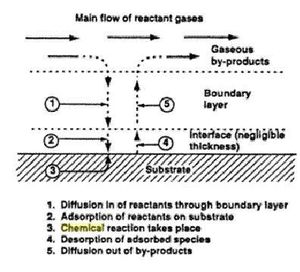 Figure 3. Fluid flow and its effects within deposition chamber [4] 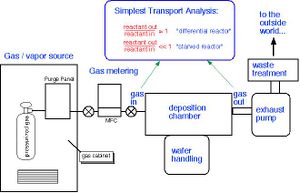 A Schematic shown in figure 4 illustrates the apparatus involved in the Vapor Deposition Process. Minor components are added based on the specific deposition process

Precursor material enters the chamber by fluid force flow. Inert gas follows flows along streamlines by diffusion within the chamber. Deposition reactions are driven by concentration gradient within the reaction chamber. Ionized material diffuse through the boundary layers of the substrate and the first film is build. After initial deposition occur molecular byproducts are formed and de-absorption occurs as the excess material and byproducts flows are sucked out of the chamber.[5]

In PVD, methods are used to react with precursor material in the deposition chamber which than react with the substrate. Enormous amounts of energy are used to physically break bonds, distort lattices and embed vaporized material onto and into the substrate causing a film to forcibly be deposited. Often laser pulses, magnetic sputtering and arc evaporation are examples of how this process works. Lasers are used to break bonds and force material to become ejected. Magnetic sputtering utilized magnetic fields to attract ionized precursor material to precursor to eject it and cause it to react with substrate by high impact forces which embedded film on the substrate. Arc evaporation use high voltages to melt material and create temporary charged plumes into charged plasma which attracts vaporized material, than quickly cools.[5]

Ionized reactive gas are forced to interact with the substrate and deposit films through chemical reactions. The type of reaction is defendant on chosen materials. The precursor comes into contact with the substrate and absorption of material on the surface occurs. The gas simultaneously diffuses through the boundary layer and decomposition of precursor molecules occurs and converts into a solid film.[5]

The Four stages of coating growth

the link below has a detailed video of the process http://web.archive.org/web/20090609065617/http://www.pvd-coatings.co.uk:80/theory-of-pvd-coatings-nucleation-and-coating-growth.htm 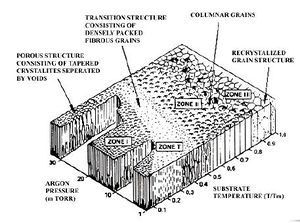 Figure 4. A schematic of the Thornton growth zone model[1]

In practice when coating takes place parameters highly sought out to apply the material with the minimal Gibbs free energy possible and make the material ideal include:

There are numerous methods to deposit thin films on substrate materials. Some of the more popular ones include:

Figure 3. An example of laser ablation

Pulsed laserW deposition (PLD) is the use of a high power laser rotated and focused at a target in a vacuum chamber. The material will absorb this energy and lattice bonds will be broken. Surface atoms are disassociated and ejected in the form of an {WP|ablation}{WP|plume}. Layered plums travel at high speeds in this chamber and impinge on the surface of a rotating substrate. The plume and substrate make contact at high impact energies particles react on the surface, adhere and compress leaving a deposit of a thin film on the surface. Laser pulses continue to ablate more product and the film thickens. It is important to note that implantation and sputtering can occur during this process to a small degree.

Figure 2. Magnetron in use

MagnetronW Sputtering is a processing method that is used to coat virtually any material of any shape and orientation. Sputtering is the removal of atomized material from a solid due to energetic bombardment of its surface layers by ionized or neutral particles at high impact velocities. Magnetic Sputtering is performed in near vacuum environmental conditions. During this particles bombardment, a controlled flow of inert gas is introduced to raise the pressure to allow the magnetronW to operate. A high negative voltage source is applied to the substrate material that attracts positive ions at high speeds. The impact energy, if greater than the binding energy of the lattice site create an oscillation withing the crystal plane and cause a recoiling effects; thus resulting in a sputtering effect from the surface atoms. The magnetic field within the system traps secondary electrons. The electrons flow in a helical path around a magnetic line and thus more ionizing collision occurs with the inert gas in the system. 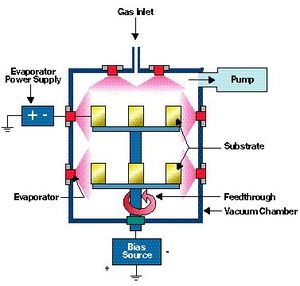 ArcWevaporationW processing uses electricity to deposit precursor material. A high current low voltage arc is connected to a microscopic cathode. This shorted current source is highly energetic emitting area known as a cathode spot. This concentrated temperature, generally extremely high results in a high velocity (10 km/s) of vaporized cathodic material that is removed from its location creating microscopic molten chips at the surface. A plasma with ionized ions, and neutral particles are released. A reactive gas is introduced and evaporation will occur. This gas will fill the chip defect spots left by the cathode and a film will be deposited.

Plasma Enhanced Chemical Vapor Deposition is mainly used for the deposition of dielectric films and passivation films like silicon oxide or nitride at low temperature. This type of process is driven by the heating of a gas or plasma rather than the sequestered material. This process is ideal when dopants are relatively low.

PlasmasW are formed usign a radio frequency generator. These reactive ions are subdivided into 'thermal' and 'cold' varieties.

Cold Plasmas are most effective below atmospheric pressure and are more practical in vacuum technologies. Plasmas adhere to substrates efficiently and have high growth rates.

Ions are continually reacting with film material already exposed to plasma, a new positive charge on the substrate film exists.

Damage from particle bombardment exists. Damage is constrained to the top layer of material due to the application of the films. The films do cover these imperfections however they application of films can have a high influence on the mechanical properties of material.[5]

Photons beams can also damage materials if they are applied with greater energies than 10 eV in the conduction band.

Byproduct contamination within the deposition chamber results from poor internal ventilation. Byproduct material gets caught in valves crystallizes around valves and other moving parts which lead to machine upkeep and longer downtime. Material also crystallizes after it coats these moving parts and than reenters where the precursor material is converting to a film and contaminates the process leading to lower efficiency. The crystalline byproducts that deposit inside the entire vacuum system need to be addressed.[6]

Here are a few suggestions to Improve such retardants 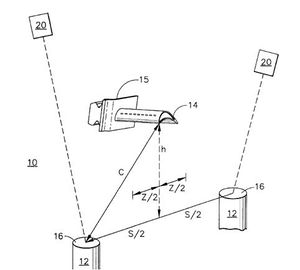 Efficiency can be improved for applying a thin film as a coating to a substrate in which the thermal conductivity of the ceramic material is reduced or lowered by up to 10%. These thermal barrier coatings having improved performance characteristics. They are applied with the aid of an electron beam or laser.

Two or more electron beam guns are located within the apparatus. A high energy source is available to melt and vaporize the precursor through a series of lenses. An airfoil is position at a critical distance 'c' from the airfoil. When the precursor material enters the deposition chamber it undergoes a lamaller flow disperses, redirects the internal forces within the chamber and speeds up the application process. The lasers/ion beam guns quickly force the precursor to react at this stable pressure and cool quickly. This process is repeated to allow minimal material to be deposited on the substrate with minimal thermal energy loss. This process happens very quickly. The vapor deposition system can more or less stay the same with few addons to the apparatus. Thus making the process feasible for companies to implore in there manufacturing process.

THe precursor material does not need to be changed because the lasers allow some growth of the deposited material. The size to which the grains grow are controllable. The below theory explains this.

Therefore: k1/t1 = k2/t2; based on ratio of thickness to density of material.

THus material density can be increased by the laser and the thickness of the material can be decrease. This proves less material is needed per film layer and per unit in production..[7] 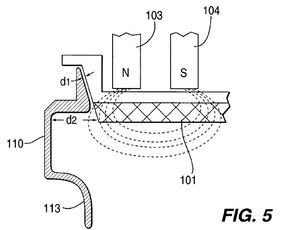 To improve the sputtering process in both laser ablation and magnetic sputtering a shield was designed and installed to resist material from being deposited on the chambers wall. A concave curved metal with a charge was installed in the system. The charged material is meant to repulse the ionized precursor material intended for the target from becoming waste on the chamber walls. The concave shape was meant to change the magnetic field lines from intersecting with one another manipulating them to that intersect and improve the vertical directionality of the sputtered material to be directed towards the substrate, thus making the system more effiecent. This concave plate is placed in the orthogonal direction to the magnetic and electric field lines. The curved portion of the shield is bent inward to protect deposition against the bottom wall. .[8]