The process of extracting uranium ore from the earth for the use of energy or weapons production.  Once the uranium is extracted, it must be further purified to be of use.  The extracted uranium from uranium mines is shipped out in the form of "yellowcake," a dry, yellow, granular material that contains approximately 80% uranium in various oxides.  The yellowcake is usually shipped in 55 gallon drums.  [1]

A method of extracting rock or minerals from the earth by their removal from an open pit. Open-pit mines are typically enlarged until either the mineral resource is exhausted, or further mining due to the Ore to overburden ratio is uneconomic. Open-pit mines are dug on benches, which describe vertical levels of the hole. These benches are usually on four meter to sixty meter intervals, depending on the size of the machinery. A haul road is situated at the side of the pit, forming a ramp up which trucks can drive, carrying ore and waste rock. Waste rock is piled up at the surface, near the edge of the open pit. Ore which has been processed is known as tailings, and is generally a slurry. This is pumped to a tailings dam or settling pond, where the water evaporates. Tailings dams can often be toxic. 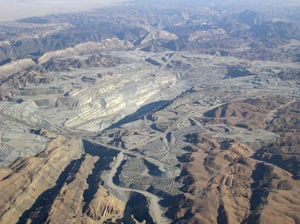 Underground mining of uranium involves digging mine shafts and hauling out raw ore to the surface, where it is then processed with leaching solutions (see in-situ leaching).

The process of recovering minerals by pumping a leaching solution directly into the ground (which must be permeable enough to absorb the solution) where the uranium-containing mineral deposit exists. Sulfuric acid or carbonate solutions in water are usually used to dissolve uranium. Dissolved oxygen is sometimes added to the water to mobilize the uranium. Once the solution makes contact with the ore, it dissolves the uranium into negative uranium ions. The solution is then pumped to the surface and the uranium ions are transferred onto small resin beads in a process known as "ion exchange." This process is similar to the way a home water purifier works to soften hard water. [2] 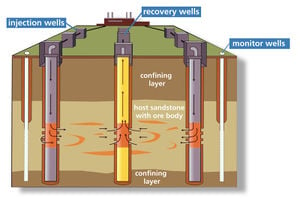 Australia reports to contain more than 20% of the uranium ore in the world, the highest amount of any country known.  Russia may contain more uranium ore, but geologic mineral reserve data in Russia is limited and no reliable estimates can be made. 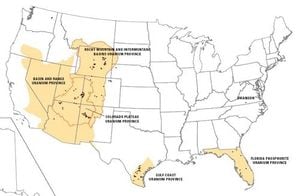 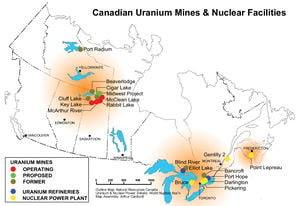 The United States ranked at number 8 in the top countries extracting uranium in 2007.

Other top countries extracting uranium are Kazakhstan and Uzbekistan.[4]

All types of uranium mining require vast amounts of water to dissolve the uranium from the rock and make it easy to concentrate.  Chemicals used with the water to dissolve the rock are recycled, but eventually this solution accumulates salts and dissolved minerals to such a high saturation that it prevents efficient uranium extraction.  The waste water is processed and filtered to remove as much of the dissolved minerals as possible, but the waste water eventually is disposed into "evaporation ponds."  There is no possible way

to evaporate enough of the water from wastewater ponds to prevent the water from draining back into local waterways.  The solid wastes that accumulate at the bottom of ponds and wastes extracted during the uranium purification process are packaged into cement containers and moved to remote locations, where they eventually begin to leak radioactive gases and materials into the environment.  Radioactivity, whether it be from the air, water, or soil, has been long known to cause a number of health problems including cancer, birth defects, and serious mental illness.  Radioactivity causes such a large number of illnesses to second and third generations that people will be less able to solve the problem of radioactive pollution the future.[5]  The scientific studies being conducted in affected communities are often inconclusive because they lack the experimental control of the variables that would better clarify the link between the multitude of illnesses in a community and local radioactive pollution.

"No solid waste is disposed of permanently at ISR (in-situ recovery) locations. Liquid wastes from the wellfield, process circuit, and aquifer restoration are often injected into deep Waste Disposal Wells (e.g., in Nebraska, Texas, Wyoming). ISR disposal wells are not classified as “hazardous”; as compared to the hundreds of “hazardous” disposal wells are used in the U.S. As with all phases of ISR, work is overseen by regulatory agencies, and follows standards established by them." [2]