As part of the Cal Poly Humboldt Parras Summer Program, we were given the chance to plan and construct an appropriate technology project of our choosing. As the result of a brainstorm in the beginning of the program, we decided that a solar powered refrigeration system would be well suited for the area. Our overall challenge being that it would not utilize electricity as its energy source.

The possibility of having a refrigeration system "off-grid" is a huge advantage in Northern Mexico (as well as other parts of the world). There are many circumstances where people do not have access to electricity or gas to power a refrigeration system. For this reason people are not able to store food as they would if they had electricity. Another challenge for all of Mexico's residents is that electricity is relatively expensive. There is the possibility that this project will create a system that is actually more affordable than standard refrigeration.[1]

Here is a table of criteria that, in our minds, define an appropriate technology for the construction of the refrigerator. When we come across a problem or an issue we can look to the table to help us remember what our criteria were in the first place. Not everything is black and white and for this reason sometimes it is easier to look to our model for what the most appropriate answer is for the situation.

The idea of a solar absorption refrigerator had existed from the beginning of the trip, however, not much was known about the workings of such a system. For this reason, much time was spent researching. From our research we concluded that an ammonia type intermittent system would be the most suitable for most situations.

We submitted a grant request to The International Journal for Service Learning in Engineering (IJSLE) for the sum of $1000 USD. The grant discussed the learning possibilities of this project as well as the impact it would have on the community. The grant was submitted on July 4th, 2008. Our project outline can be viewed via ServiceBook.org. 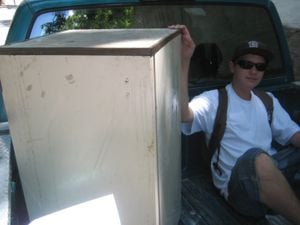 Materials collection ended up being the largest part of this project, with construction taking just over a week to complete. We encountered many obstacles in our searching, but we were able to improvise at many steps.

We formulated a budget in conjunction with the writing of the IJSLE grant. Before starting the project we did not have a clear idea of what materials would cost in Parras, so it was difficult to estimate how we would spend our money.

This budget was designed to be within a 1000 USD range. It provided room for educational materials and a community demonstration.

All of the pipe that we purchased was threaded galvanized steel.

In our wait for welding equipment, we decided to begin construction of the solar collector.

The collector was designed with reference from SOLAR COLLECTOR/COOKER PAGE. We decided on a trough style parabolic collector to heat the collector pipe.

Using Winplot and a projector at the school, we were able to trace a template on cardboard for the shape of the parabola. Using this template we shaped metal rods that had been scrapped at the school. We used these parabolic metal rods as ribs for the support of the collector surface.

The frame for the collector was constructed of bamboo. We designed the collector to be built with a minimum level of complexity to be sure that we didn't run into problems in construction. We also felt that the design we chose would be sturdy enough to sustain movement and adjustment.

The collector surface was constructed of a thin ply plywood and laminated with tinfoil.

We laid the plywood into the ribs of the collector and drilled holes to tie the plywood down. The plywood was flexable enough that only a couple of tie points were needed. When the plywood was mounted, we applied elmers glue to sections of the surface and applied the sheets of tin foil.

The main issue in our build was scale. The condenser in our system was far too small to produce any significant heat change. We noted fluid movement from the solar collector to the condenser and back again, but temperature change was insignificant. In future testing we would attempt to build a larger system, hoping that it would transfer more heat.

Page data
Retrieved from "https://www.appropedia.org/w/index.php?title=UTC_Solar_Absorption_Refrigeration&oldid=623975"
Cookies help us deliver our services. By using our services, you agree to our use of cookies.
Categories:
Maintenance categories:
Comments
Privacy policy · About Appropedia · Disclaimers · Mobile view · Content is available under CC-BY-SA-4.0 unless otherwise noted.
</html