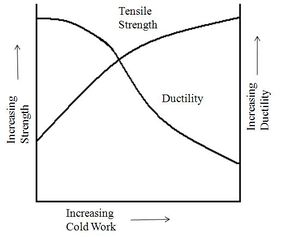 Fig 1: Effect of cold work on the strength and ductility of a typical metal
Location data

Transformation Induced Plasticity (TRIP) steel, is a type of steel alloy which exhibits excellent strength and ductility. Transformation induced plasticity refers to the transformation of retained austeniteW to martensiteW during plastic deformation. This property allows TRIP steels to have a high formability, while retaining excellent strength. In the processing of metals, there is generally a compromise that must be made between strength and ductility.[1] This is demonstrated by the graph in Figure 1, which shows the compromise between strength and ductility during cold work. The advantage of TRIP steels is that they have much higher ductility than other steels with similar strength.[2] The ductility and strength of TRIP steels make them an excellent candidate for automotive applications. Indeed, structural components can be made thinner because TRIP steels have the ductility necessary to withstand high deformation processes such as stamping, as well as the strength and energy absorption characteristics to meet safety regulations.

Fig 2: Diagram of the grain structure for a typical TRIP steel 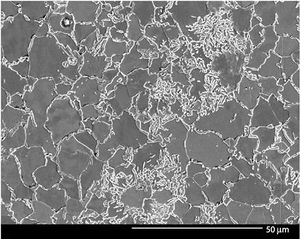 Trip steels are hypoeutectoid iron carbon alloys which typically contain 0.1 – 0.4 % carbon by weight. TRIP steels also contain alloying elements which prevent the precipitation of the high carbon cementiteW phase which is present in typical steels at room temperature. This raises the carbon concentration of the austenite phase, which becomes stable at room temperature. Silicon and Aluminium are the two most common elements used to stabilize the austenite phase at room temperature.[4] Other alloying elements such as titanium, niobium, vanadium…ect. can also be added to improve the strength of the alloy. 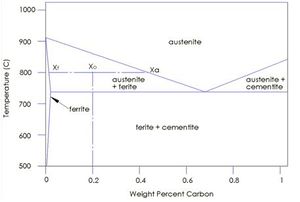 Fig 5: Diagram showing the carbon concentration in the bainitic ferrite phase and the austenite phase 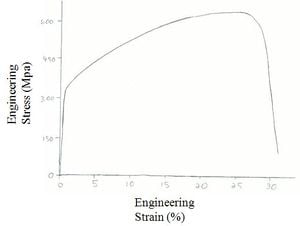 A typical engineering stress-strain curve for TRIP steels is shown in Figure 6. As can be seen, TRIP steels have a large amount of work hardening. The high work hardening can be attributed to the TRIP effect, as well as the fact that TRIP steels are primarily composed of soft ferrite and hard bainite. This "dual phase" nature allows for local deformation of the ferrite phase while maintaining a high tensile strength. Indeed, their tensile strengthW is typically twice the value of their yield strengthW.[2] This means that TRIP steels also exhibit very stable work hardening, where the onset of necking occurs at relatively high elongation values (over 25%). This makes TRIP steels ideal for forming operations such as stamping or bending. Forming operations are often limited by the loss of strength of the component due to wall thinning, or rupture because the material reached its forming limit. TRIP steels are ideal for such operations because they have a high formability limit and have stable yield point elongation which increases the structural integrity of formed components.

Hot-dip galvanizingW is a widely used surface treatment for steels. During the process, molten zinc bonds with the iron to form a layer which protects against corrosion. Original TRIP steels only contained silicon as the alloying element used to suppress the formation of the cementite phase. The content of silicon in these alloys was approximately 1.5 % by weight. This relatively high silicon content formed silicon oxide at the surface of the steel prior to the galvanizing process.[10] This oxide severely degraded the properties of the galvanized surface coating.[4] Newer TRIP steels have partially or completely replaced silicon with aluminium as an alloying component. The aluminium plays the same role as the silicon, but does not have negative effects on the surface finish during galvanizing. Therefore, the silicon content can be reduced while maintaining the TRIP properties of the steel.

TRIP steels are an ideal choice for structural materials in automobiles. They have the ductility and stable work hardening necessary to withstand high deformation processes such as stamping. As well, their high tensile strength makes them ideal for highly stressed components. Finally, they have excellent energy absorption properties because of their ductility and strength, which can improve vehicle safety during a crash. Because of these beneficial properties, TRIP steels could be used in smaller quantities to replace current steel components. This is known as "down-gauging", where thinner sheets of steel are used to form components.

Approximately 55 percent of the mass of an average passenger car is made of steel.[11] It has been shown that the volume of a mild steel formed sheet can be reduced by 20 percent by using TRIP steel, while maintaining the same stiffness.[12] Therefore, it can be assumed that the use of TRIP steel could reduce the mass of steel on a vehicle by 20 percent, and the total vehicle mass by 11 percent.

The percentage of consumed fuel that goes directly into recovering inertial losses from braking is 5.8 percent.[13] The weight savings from using TRIP steel would reduce the amount of inertial losses by 11 percent, because kinetic energy is directly proportional to mass. This means that using TRIP steels could lead to a reduction in total fuel consumption of 0.64 percent.

Please note this is an extremely conservative assumption as rolling resistanceW is also dependent on mass and was not included in this example.

Magnitude of effect on a global scale[edit | edit source]

If we assume that an average passenger vehicle consumes 10L/100km (23.5 mpg), and that an average car travels 20 000 km (12500 miles) in one year, the weight savings translate to an annual fuel consumption reduction of 12.8 liters (3.33 gallons). In 2007, there were 136 billion passenger cars in the United States.[14] This means that using TRIP steels in vehicle fabrication has the potential to reduce fuel consumption by 1.74 billion liters (460 million gallons). This represents a carbon dioxide emissions reduction of 4.18 billion kg (1.9 billion lbs), which is a reduction of 0.07% of the total United States carbon dioxide emissions.[15]

Steel is commonly used because of its strength, formability and low cost relative to other metals. Metals such as titanium, magnesium, and aluminum have a higher strength to weight ratio and could offer significant weight savings in automobile components. However, they are much more expensive due to their lower abundance, higher production costs, and higher machining costs. As well, worldwide supply of these metals is fairly limited. These factors prevent these metals from being commonly used in low end production cars, which the majority of the population drives. TRIP steels do not face any of these difficulties, because they are a low alloy steel. Implementing the intercritical annealing step in steel processing should not prove to be difficult. This means that TRIP steels could be produced for the same price as other high strength steels. The most important barrier TRIP steels have faced in their market integration is the poor galvanizing surface finish. The galvanizing process is used on a large number of automotive components, because it is easy, inexpensive, and effective. With the recent discovery of aluminium as a replacement for silicon, TRIP steels no longer face past difficulties with galvanizing. TRIP steels can now be effectively protected from corrosion in an economically viable way, which means we may be seeing commercial production of TRIP steel products in the near future.

Page data
Retrieved from "https://www.appropedia.org/w/index.php?title=Transformation_Induced_Plasticity_%22TRIP%22_Steel&oldid=623952"
Cookies help us deliver our services. By using our services, you agree to our use of cookies.
Categories:
Maintenance categories:
Comments
Privacy policy · About Appropedia · Disclaimers · Mobile view · Content is available under CC-BY-SA-4.0 unless otherwise noted.
</html