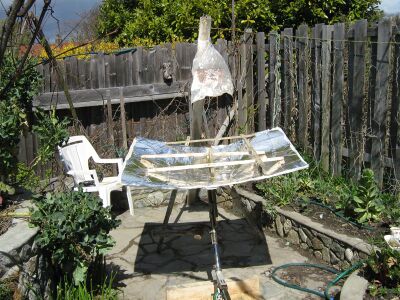 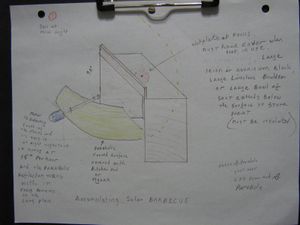 First drawing of the concept

This page describes an apparatus to automatically rotate a solar reflector so it tracks the sun as it moves across the sky during the day.

The concept of the tracking barbecue is fairly simple. A parabolic dish is set up on equatorial mount with the focus on the axis it turns on.

If you point the dish at the sun and then turn the axis at 15 degrees per hour then the focus remains on the same spot all day. The turning can be done with a telescope tracking motor for equatorial mount.

At the focus, there is a heavily lagged vessel with high heat capacity to absorb the heat for the day and get to a very high temperature. This heat is used late in the day or in the evening to cook food like in a normal barbecue. suitable materials for the vessel might be iron, aluminium, salt, parafin wax. (or perhaps a mix of these substances). a key is that the focus is fairly small and enters the vessel through a small unlagged area at the bottom of the vessel. A layer of parafin in the bottom of the vessel might provide a one way "gate" for heat. The parafin takes the heat away from the bottom by convection. Similarly, at the top of the vessel, a hotplate of aluminium could have "legs" extending into a vessel filled with rock salt, or limestone. Salt and limestone are cheap and have high heat capacity but low thermal conductivity so they make good storage substances. Aluminium has good heat capacity AND good thermal conductivity so it can more quickly "soak" the heat from the vessel and pass it through the hotplate to the food being cooked. Brian White 2nd february 2008 Here is a picture of my mould for the first reflectors 28th march 2008 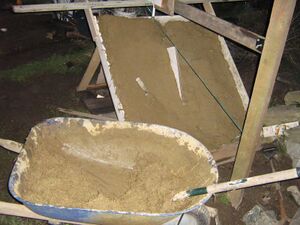 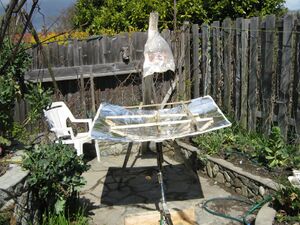 It would be very difficult to make a reflector for a solar barbecue for year round use. I intend that reflectors are good for 6 months or so. I explain the dificulty in this videosizing of dish and tracking Please note that the video shows a 2 dimensional model of the 3 dimensional dish. A little imagination is required! This is the first working prototype from april 2008 Here is a picture of a proposed tracking mechanism. I propose using an ordinary clock to regulate the speed of the equatorial mount as in the picture. 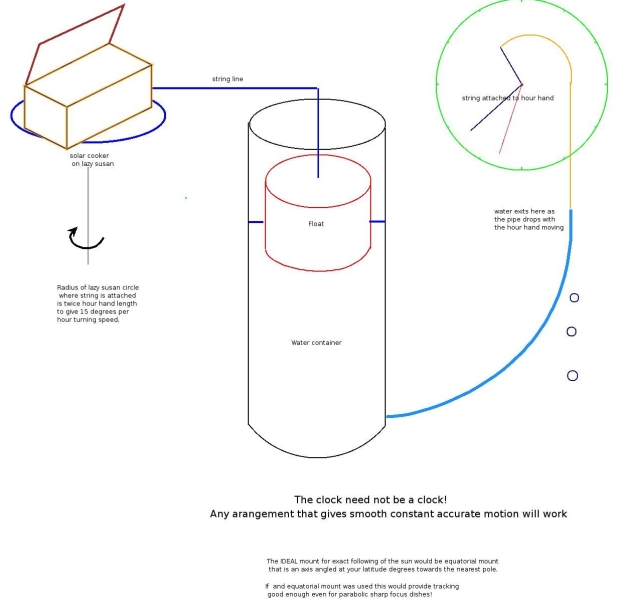 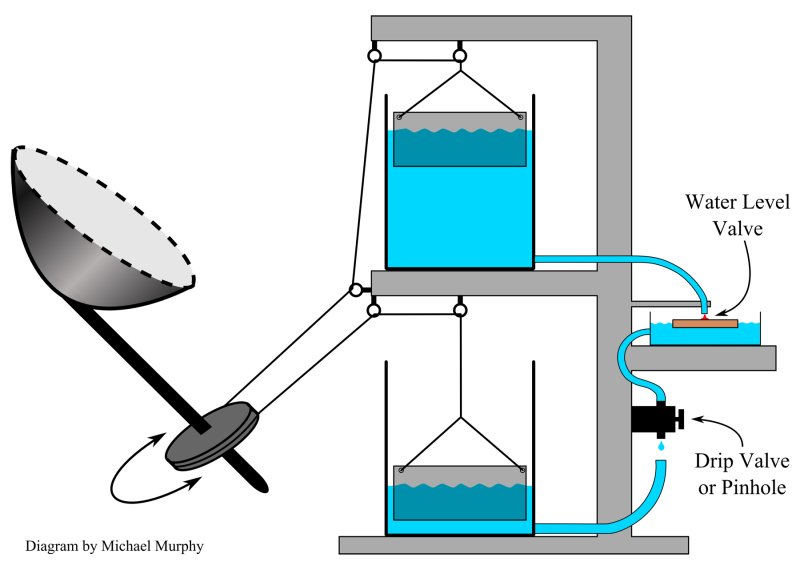 I am currently testing a version of this tracker that i made using old paint buckets as containers and bottoms of a slightly smaller paint container as floats.

I can get at least 5 hours of tracking with 1 bucket of water going through the dripper tracker. (8th may 2008)