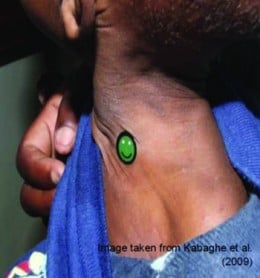 Hypothermia is a leading cause of infant death in developing countries. Thermometers can be expensive and some require electricity or batteries, which can be a difficult burden on the user. There is currently no low-cost method for continuous monitoring of an infant's body temperature.

Thermo-spot has been field-tested for more than a decade in several locations including Northern India and Malawi. It is available for sale for less than 8 US cents, and the cost is expected to decrease with mass implementation. This device is now currently available for purchase.

Clinical studies were funded by the Bill and Melinda Gates Foundation and Save the Children. The Johns Hopkins School of Public Health has also contributed to this product's development.