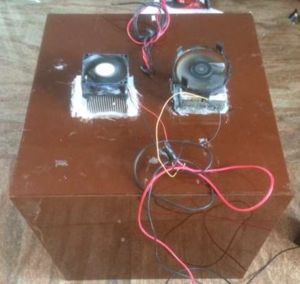 Nearly two-thirds of the energy that is produced by conventional power generation methods is lost as heat. Be it in thermal power plants, nuclear power plants or something as common as a car, that we use everyday. By harnessing this heat, we increase the overall efficiency of the system, hence, reducing the carbon emission, and potentially saving huge amounts of money. Thermoelectric materials like bismuth and lead tellurides show high Seebeck coefficients, which essentially means that the amount of power generated per unit change in temperature is higher. This, along with high electrical conductivity and low electrical conductivity are the traits expected in a thermoelectric material. Historically, these materials have been used in Cassini and Voyager space missions.

Thermoelectricity is yet to be used on a large scale. The goal of the project was to build inexpensive thermoelectric modules to be in used in small, easy-to-make, and portable cooling machines. [1]

Costs involved in making the thermoelectric module and cooler:

Although the efficiency of the system is low (<4%) due to the repeated conversion of the form energy, it is to be noted that no external source is used. Additionally, these coolers operate without any refrigerants.

Naturally, the next step is to increase the efficiency. This is as much a materials science challenge as it is an engineering challenge, as the efficiency of bulk thermoelectric materials it self is <6%. Hence, we plan to research on more inexpensive materials that show good Seebeck coefficient. The cost of making the coolers (or any TEM based machines) will go down drastically when mass-produced, hence, the costs for future machines is expected to go down by at least 40% as per our estimates.

Another goal that we would like to pursue is the integration of thermoelectricity with photovoltaics, as they would boost overall efficiency when they're working in tandem or as a combination.

Thermoelectric materials, like solar cells, convert electricity directly without any moving parts, which is suitable for a static system. Hence finding an optimised material that exhibits good characteristics of both photovolaics and thermoelectricity is something that would benefit humanity greatly.