The Passive House Association of Ireland 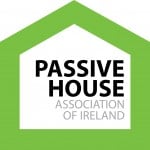 The Passive House Association of Ireland

The Passive House Association of Ireland has five founding members. Each of the members are comprised of organizations that are leading users of Passive House techniques. The five founding members consist of Coillte Panel Products, Ecological Building Systems, Martin Murray Architects, Munster Joinery, and University of Ulster. [2] Founding members offer their own contribution to the Passive House concept. Coillte Panel Products, provides OSB and MDF wood based panels, which are traditionally used for structural and non-structural purposes. [2] Ecological Building Systems has been the front runner of manufacturing airtight and windtight building products. [2] Martin Murray Architects provides a variety of architectural services such as, sustainable design, conservation, project management, and urban design. [2] Munster Joinery is one of the leading manufacturers in energy efficient windows and doors. [2] University of Ulster is known for teaching and widening access to education, research and innovation through technology. [2]

The Passive House Principles, also known as Passiv Haus, are a precise, detailed design of building, that focus on an energy demand that is 90% lower than most buildings. [1] This concept is “based on minimizing heat losses and maximizing heat gains from the home,” this is done by reducing heat loss with insulation and by making the house airtight. [3] In a video series about Passive House building, Jeff Colley, Editor of Passive House Plus stated, “many people remain unaware that it’s a specific, rigorous building standard, and mistakenly use it as a short hand for energy efficient building and use of renewables.” [1] Because Passive House techniques are independent of fossil fuels such as oil, coal and/or gas, they often get mistaken for being eco friendly due to that one aspect, rather they are renewable throughout the entire building process which is one of the factors in qualifying a building for passing Passive House code. [3]

Spending cost is one factor. It has been figured that using the Passive House building standards increases cost by at most 20 percent and a lot of times, there is no raise in cost at all. [4] Architect, Tomas O’Leary says, “a good portion of the cost of a Passive House is actually substituting other costs.” [3] Saves money in the long run. On average, a building built using the Passive House technique generates an 85 percent savings in comparison to conventional heating techniques. [3] This means that the up front investment will likely pay itself off within seven years. [3] 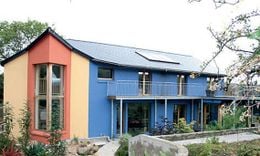 MosArt built its first Passive House, ‘Out of the Blue’ in 2005. MosArts owner, Tomas O’Leary currently resides in the home and played a large role in the houses development. O’Leary first learned about the Passive House concept at a conference in Kerry, where a Swedish architect “explained how he designed a terrace of houses without any conventional heating system.” [3] When building ‘Out of the Blue,’ MosArt used some basic building principles to ensure the best quality. Because one of the main aspects of Passive House is building a space that is energy efficient, MosArt decided to build their house facing the road rather than the standard, which is facing the house south. [3] This was because facing the house towards the road meant excess energy production due to the sunlight. [3] Since building ‘Out of the Blue,’ MosArt has become a recognized authority on Passive House building. 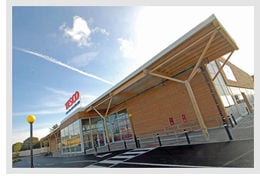