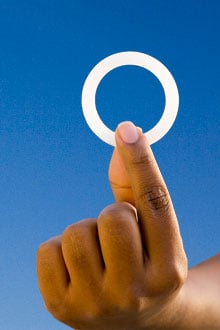 Despite extremely high rates of HIV infection in women, there is currently no discrete method to prevent infection.

The Microbicide Ring is a flexible, silicon vaginal ring that releases dapivirine slowly over the course of a month. Using matrix technology, the drug is evenly dispersed throughout the ring. After insertion, no further action is required by the user until a new ring must be inserted one month later. Similar rings are used in the United States for contraception to great effect, and studies have shown this method to be acceptable to both men and women in Kenya.

This device is in the middle of extensive clinical trials in Eastern and Southern Africa. In 2010, 280 HIV-negative women in these regions were randomly assigned to a drug delivery group or placebo group and were required to return to the clinic to replace the ring every month three months. This study primarily tested safety and documented the acceptability of the device to women and their capacity to use it correctly. Results are due in 2015 for a Phase 3 study to test the device's effectiveness at preventing HIV infection, pending the results of the current trials.