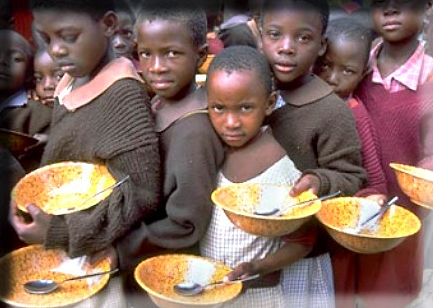 Children like these are benefited daily by the works of the FEED programs.

The mission of the FEED organizations' is to create sustainable projects that will help prevent hunger worldwide. They create high-quality products by using material that is environmentally green and artisan-made as well as having good labor morals. In summary, they stand strong in their belief that each human should be guaranteed basic human rights, which includes nutritious and healthy food. [1]

FEED is a concept that began in 2005 with activist Lauren Bush. [2] Prior to Bush’s efforts in establishing the FEED Project LLC and the FEED Foundation she worked readily with the United Nations World Food Programme's or, WFP. (WFP is the world’s largest humanitarian agency fighting world hunger.) [3] While Bush worked for WPF she became a world traveler as a WFP Honorary Student Spokesperson where she was greatly influenced by their program designed to feed and educate hungry children. It was her effort with WFP that encouraged the creation of her FEED 1 bag concept. [4] Bush’s FEED 1 bag concept meant that for each bag one child would be fed throughout the course of one school year. In 2007 this notion is what became known as, FEED Projects LLC when Bush partnered with co-founder Ellen Gustafson to produce and sell the bags. FEED Projects LLC in 2008 then started a non-profit known as, the FEED Foundation, which is dedicated to supporting other programs and organizations in fighting world hunger and malnutrition. [5]

Target has played a significant role along side the FEED organization. The Target corporations have added a FEED USA collection to both their online store and in stores. This initiative is the largest that the organization has ever had in the U.S. and is referred to as FEED USA + Target. The line offers over fifty lifestyle products that include: bikes, household items, clothing, water bottles, bags, and other accessories. The FEED products that are purchased at a Target help the organization in preventing hunger throughout the United States by giving back to families and children. [6] Their goal is to serve more than ten million meals to families in need. The concept behind FEED products sold is that there is an additional cost for the food that will be donated incorporated with the retail price. Ten percent of the original retail price is donated to the FEED USA Foundation. Each dollar raised for the FEED USA Foundation is equivalent to supplying eight meals; this is done through feeding Americans at local food banks. [7] The idea is, the more you spend the more meals you are donating. A majority of the items range from $8.00-$35.00. However, the most expensive item sold through the FEED USA + Target line is a $400.00 bicycle. [8] To provide Target’s customers with an idea of what the collection has to offer, the FEED USA + Target partnership created look books for shoppers to get an idea of the items that are for sale. They started advertising with commercials that demonstrated different ways to wear and style products from the FEED USA + Target line, as well as how to add the collection to your everyday life. For example, in furnishings and throw pillows, as well as plates and water bottles. [9] This advertising campaign successfully gained consumers for the FEED USA Foundation, which has made the partnership a success so far.

The FEED Foundation is organized through relief efforts and gives back to communities throughout the United States as well as countries who have trouble feeding their entire population all over the world. The FEED Foundation organizes relief efforts to help combat the hunger problems that people are facing every single day all over each continent. Donations are accepted and always needed by the FEED Foundation; the donations received go straight to consuming bulks of food that are immediately given to communities of people who are in need. The donations provided are turned into food for communities by first collecting the donations from organizations or groups who are partnered with the FEED Foundation, such as Target. Once donations are collected, they are used to buy meals for communities in need and are also given to aid workers that are on the ground in those communities. The FEED Foundation not only provides food along-side their generous donations, but they also tend to supply books and health supplies as well. Though, when the donations are used for food products, they can be broken up into getting vitamins, a micronutrient powder and school feedings, which are all really important for the people who are in need of the Feed Foundation. School feedings are often made up of a cup of fortified rice, porridge, or beans and a monthly take-home ration.[10] The FEED Foundation has donated over $6 million, funding nearly 60 million meals in more than 62 countries around the world.