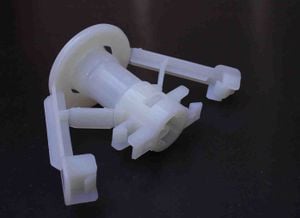 Recent studies have shown that circumcision is up to 60% effective in reducing the transmission of HIV/AIDS. The HIV epidemic continues to spread in many African countries and widespread circumcision of adult males could prevent millions from contracting the virus. Easy-to-use devices are a useful means of performing circumcisions in regions with limited resources.

The Tara Klamp uses plastic arms to trap the foreskin and perform circumcision without creating an open wound or the need for sutures or ligatures following the procedure. The Tara Klamp can be used to circumcise both infants and adults and comes in eight different sizes. It could be especially effective in developing settings such as sub-Saharan Africa where there is limited training for the procedure to be carried out safely and hygienically.

The Tara Klamp was introduced in the early 1990s and has been used and implemented in Malaysia. It has also been introduced in other countries, such as South Africa, although there has been some controversy surrounding the product.

As with all surgical procedures or techniques, training is mandatory. Controversies were created by certain groups who used the device on their own and without any training. Wherever training was sought and given, the Tara Klamp surgeries were vey successful.

The project has internal funding.