Syria's civil war and the environment

The conflict in Syria is thought to have had many origins, stemming from human rights violations to western influence. One major factor that is commonly overlooked is that Syria was suffering one of the worst droughts in modern history preceding the civil war. Up to 60 percent of Syria’s land was going through drought during the 2006-2011 periods according to Fancesco Femia a co-founder of Center for Climate and Securit [1].

The drought is estimated to have affected 2 to 3 million people and driven over a million into food insecurity according to the UN.[2]

Francesca de Châtel is a PhD student at the Institute for Science, Innovation and Society at Radboud University in Nijmegen, The Netherlands she stated in response to her article “The Role of Drought and Climate Change in the Syrian Uprising: Untangling the Triggers of the Revolution.”[3]

“I will argue that it was not the drought per se, but rather the government’s failure to respond to the ensuing humanitarian crisis that formed one of the triggers of the uprising, feeding a discontent that had long been simmering in rural areas.”

In this article De Châtel states environmental impacts where not alone in causing the uprising but together with political reasons such as cancellations of subsidies in 2006 for example, escalated public unrest. Miss management of natural resources also played a great role in the uprising. The drying up of ground water in the breadbasket of Syria on failed agricultural projects caused an already poor area to get poorer.

The growing of water intensive crops such as cotton and wheat where subsidized and encouraged which just led to the depletion of the groundwater.

While these environmental factors where a big factor in the civil war, the handling of them by the Assad regime was by far the biggest reason for people to take to the streets. Not taking blame and instead focusing the blame on outside influences and pursuing projects that further divided the country are major reasons for unrest. 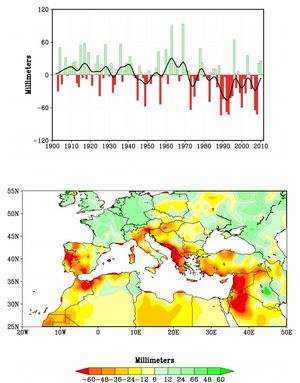 Figure 1. Reds and oranges highlight lands around the Mediterranean that experienced significantly drier winters during 1971-2010 than the comparison period of 1902-2010. Credit: NOAA