A sustainable community is a community, usually intentional, that is designed and organized so as to fill as many of its needs as possible internally, especially without input from outside. This is done just to reduce its ‘footprint' on Earth, it's pressure on the environment or to prepare for a perceived impending disaster due to world economic collapse, petroleum running out, climatic change or such.

By their very nature of being independent of outside supplies and for their philosophy of life, sustainable communities are normally at least into growing their food organically, and may even be vegetarian or vegan. In the same vein, they normally produce their energy from non-fossil fuel, alternative energy sources. These communities are also often strongly involved in handicrafts and minor industries as well as being deeply interested in the environment and their local natural ecosystems. It is with all these aspects of sustainable communities and of green living, that Wiki Green deals with. 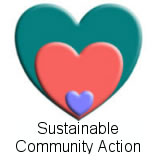