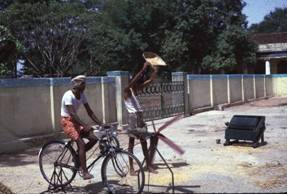 This manual describes the design and construction of a device which, when attached to a standard bicycle, will permit it to be used as a pedal‑power machine. The resulting machine, known as a dual-purpose bicycle, can be used to power numerous small‑scale mechanical devices such as grain threshers, grinders, water pumps, electrical generators, and a variety of small machine tools. When desired, the dual-purpose bicycle can be converted from its transportation mode to its pedal‑power mode, or vice versa within a matter of minutes.

It should be noted that the design criteria, materials used, and the procedures adopted in construction may be modified to suit local situations. It is suggested that low-cost and readily available materials and standard bicycle parts be substituted whenever possible. Changes in construction method and in dimensions should be made according to the availability of materials and manufacturing capability.

When designing our attachment, the following considerations were taken into account:

As bicycles come in various sizes and there are a variety of tube sizes used for frames, only photos and schematic of the pedal power attachment are given below.

Please note that the schematic does not have measurements and hence, we recommend that you use a machinist to fabricate this part. Village craftsmen in India, Thailand, Mexico, and Belize were able to produce this part using the schematic given below. 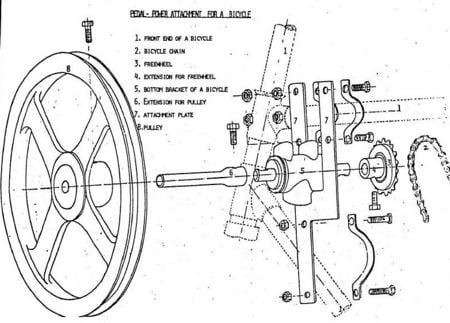 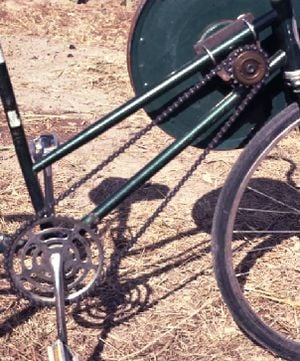 The stand described here is designed to support most bicycles. Modifications may have to be made for some bicycles. 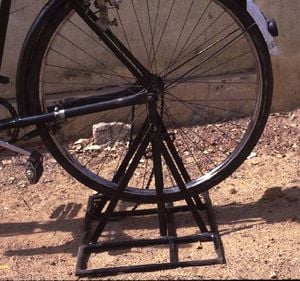 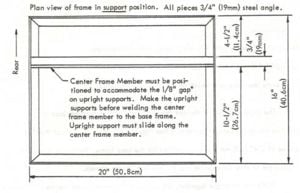 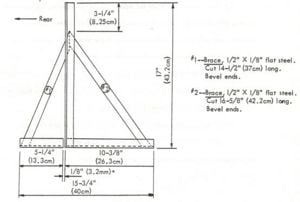 Make two pieces of upright supports: one as shown and another one a reflection of the one shown below. All pieces are made of 3/4" (19mm) steel angle, unless specified otherwise. Weld all joints. 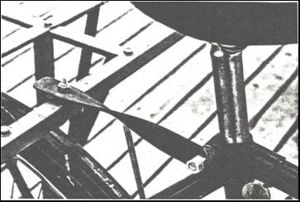 Fashion a device to hook the stand to the bike frame below the seat when the stand is in the luggage rack position. A piece of 3/4' (20mm) x 6" (15cm) flat steel can be twisted and spring‑mounted as shown in figure 10. A pin fastened to the end locks into a hole in the stand. The stand is now completed.

Technology for the Poor