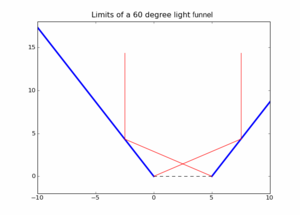 Where reflector tilt angles are suggested for solar cookers, the angles suggested are often non-ideal and based on intuition.

The ideal angle at which to incline the reflectors is 75 degrees (or, 15 degrees from the solar axis). This is steeper than usually intuited.

A good length for the reflectors to be is twice the width of the target opening.