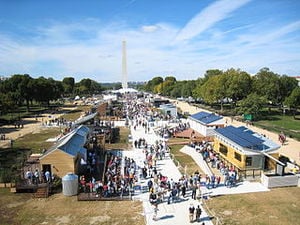 The U.S. Department of Energy'sW Solar Decathlon is a competitive program in which teams of college students compete to think of, create and operate solar-powered houses. These houses must be good-looking, energy-efficient and cost-effective as they will be judged for the program. The team that builds the best houses, based on energy use/consumption, great design and best looking for the consumers wins the Solar Decathlon. The competition allows visitors to look at the houses built for free and during certain hours to see how they can make their own homes more energy-efficient, more environmentally friendly or to just make their bills cheaper.

The Solar Decathlon has been going strong since 2002 and in only the first ten years of it's creation, it influenced many people to try to establish a more energy-efficient based homes for the success and sustainability of the future. In the beginning, only fourteen different school-based teams competed in the Solar Decathlon and as of 2012, over ninety teams have competed. The Solar Decathlon doesn't have a long history, but it is growing in popularity as the years and publicity increase.

The purpose of the Solar Decathlon was simple, but the impact it created is as great as it was imagined to be.

The 2013 Solar Decathlon teams include:

...our students at the University of Wollongong have been successful in winning a place in the finals of the Solar Decathlon competition in China, which will be held in July-August 2013. And we also won entry to the competition in the US as well, I might say. And we're the first Australian university to have won a place in any of the Solar Decathlon competitions.
— Paul Cooper, Director, Sustainable Buildings Research Centre, University of Wollongong.[5]

(Another Australian effort: Solar Decathlon Australia, which appears to be a past attempt at entering the Challenge. Status: Unknown.)