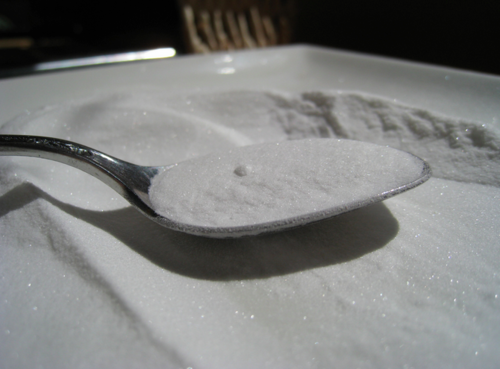 Sodium bicarbonate (NaHCO3) is a chemical compound. It is a salt made up of sodium ions and bicarbonate ions.[1]

In natural form, it is either a solid white crystalline structure or is best known in its powdered form.

In nature, it can be found dissolved on mineral springs.[1]

The wide usage of sodium bicarbonate has resulted in it having varied names across different countries. It is known by such other names as bicarbonate of soda, baking soda, cooking soda, bread soda and so forth.[1]

This chemical has many uses and has been put to good use by humans for centuries.

As a mild alkali, sodium bicarbonate is used in cooking and baking. It is a leavening agent in baking.

It can be used in some preparations for removing bugs from plants.

Sodium bicarbonate can be used as a mild disinfectant.

It can be used as a deodorant for personal use and for the house.

Sodium bicarbonate can be used as a cleaning agent, such as scrubbing shower surfaces, tiles and counter tops. It can be a drain cleaner when combined with vinegar.