From Appropedia
Redirected from Soapmaking 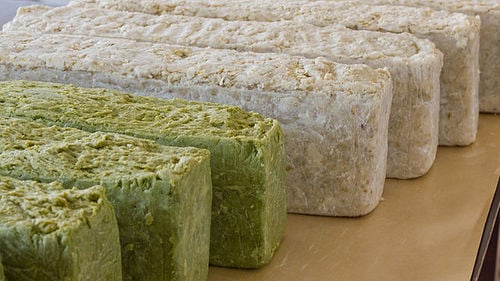 Logs of soap made from lye extracted from wood ash.

"Cleanliness is next to godliness" is what I have always heard and is what the Ozark people believe. This is shown in the tradition of soap making. The homemade soap had many uses. Annie Fike, a neighbor of the Houghs who helped us, said, "That's all we had, a wash board and a bucket of lye soap. We could get things clean with it but it took lots of backbone." This soap was used for washing dishes, bathing and washing clothes.

There are several variations of soap. One of these is soft soap. Soft soap was made like hard soap, but it was taken off the fire before it reached the stringly or jelly-like state. Stored in buckets, housewives would dip out what they heeded and used it much like modern day liquid detergent on dishes and clothes. To be extra elegant sometimes women added coloring or perfume before pouring out the soap to cool.

To make about nine pounds of lye soap you need:

The fat can be suet, cooking grease or lard. It should be clean or free of meat to have nicer soap.

The cooking container should be iron or granite and plenty big enough to hold the soap mixture even when boiling. Use a wooden paddle or large spoon to stir.

Lye soap can be made on a stove inside or traditionally over a fire outside using an iron kettle. Lye is very strong and dangerous, so use care in preparing the soap.

The first step in making lye soap is combining the lye and water. Mix well to dissolve the lye. Be careful not to get over the kettle or breathe the fumes. After combining, bring this mixture to a boil before adding the grease. Stir this mixture as it cooks so it will not boil over. However, allow it to boil enough so the lye will eat the grease.

To test to see if it has cooked enough, let the soap mixture drip off the spoon. If it is done, it will string or bead up like jelly. When done, pour it into a container and let cool. Before completely hard, cut into squares.

"This is the way they used to do it."

"The cleaner the grease the nicer the soap."

When done, the soap will cake up on the paddle. 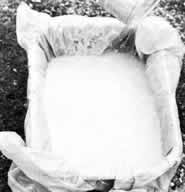 Page data
Retrieved from "https://www.appropedia.org/w/index.php?title=Soap_making&oldid=597342"
Cookies help us deliver our services. By using our services, you agree to our use of cookies.
Categories:
About Appropedia · Policies · Contact · Content is available under CC-BY-SA-4.0 unless otherwise noted.