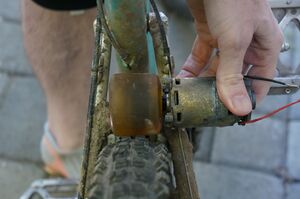 The objective for this project was to create a viable bicycle-based product that can produce renewable energy by pedaling, which can be stored to power electronics. The product is adaptable to nearly any bike and can connect via the seat post of the bike. There are two main parts of the design: The frame which holds the motor, gearbox, electrical guts, and the battery. Both parts are small and compact and can be attached to nearly any bicycle with ease. 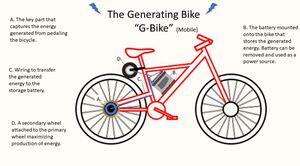 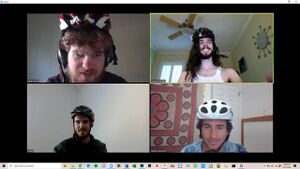 This project was developed based off of a concept from Sam Rusak of Sierra Nevada College that was entered into a sustainability contest and won. The "Gbike" was made with the intention of providing those without reliable power to create their own while being able to self-transport after the team was affected by multiple blackouts in Humboldt County.

Currently, there is not a portable bicycle-powered charger powerful enough to charge a laptop.

Conceptual: The conceptual prototype was constructed out of cardboard and a wooden dowed. This prototype was created based on consumer and client desire to have a motor mounted from the seat post and to have the power generating system make contact with the top of the wheel. This prototype provided us with a visual repsentation to base future designs upon.

3D Rendering: The 3D rendering was constructed in Fusion 360. The prototype was created to increase the amount of voltage created by the motor when pedaling. This prototype also includes the structure of the conceptual mounting prototype as stucture for the gear box and motor. This prototype represents a system that is close to our final design for the motor mount and system. This model gives a look at how our final design will fit together and has the parts that need to be 3D printed for the project.

The first test for the bike utilized a power-drill motor as the electricity generating modem. The motor was zip-tied on to the frame of the bike, and a multimeter was secured via tape to the handle bars of the bike for reading results. Riding the bike down a hill at nominal bike speeds (~15mph) yielded a voltage around 1.7V. Unfortunately, this was not a sufficient enough voltage for our criteria, and a method of improvement would be a 6:1 ratio gearbox. This would, if KV rating is to be assumed linear, would then produce a voltage of around 10.2, which would be sufficient. Further testing was met with many setbacks, including printer malfunction and faulty part shipment. Unfortunately, finding replacements/alternatives during the Sars-CoV-2 Pandemic was highly improbable to do in a reasonable time span.

GBike - Instructions for Implementation and Use

The "GBike" has very little maintenance that needs to be done despite replacing the occasional broken or worn down part.

The GBike project was the combined effort of Sam Rusak and Brennan Lagasse from Sierra Nevada, as well as the HSU group team Techné, of which the members are Micah Chitraroff, Garrett Mitchell, Ethan Pirkle, and Aidan Wilson. The project was brought to life by Sam Rusak, who drafted the idea for the GBike and won a competition with the design. Team Techné was then tasked with creating a physical prototype of the GBike. The process for the creation of the GBike was a long, but fruitful one. The Criteria set were met in the end, and the cost of the GBike is within the predetermined cost criteria as well. Team Member Garret Mitchell is currently responsible for the physical construction of the GBike during the COVID-19 pandemic, as he has access to a 3D printer within his residence. The 3D modeled parts for the prototype were made by the other team members as well. We hope to, going forward, be able to run many tests with our current prototype and see if we can improve our design in any way. This project undoubtedly has the ability to be taken to the next level, and the next section of the GBike Appropedia page will outline some future ideas for the GBike.

The future of this project would be the expansion of unit production and the testing of alternative materials. Currently, the box that houses the gears and the generator is made out of a printed plastic filament. We could experiment with the use of different metal alloys, likely consisting of aluminum. This would have to be done with advanced CNC metal cutting, which would require more financial resources to be allocated to the project. Another future idea to consider would be the testing and creation of different models/variants. For instance, different types of the GBike that would produce more or less energy depending on what the need of the user may be. Alternatively, we could also try and implement a system in the product that allows the change of mechanical resistance when biking. What is meant by this is a way to switch the gear ratio in the gearbox in order to produce less electricity with less resistance, and more electricity with more resistance.

Will reference the finished document in PDF form