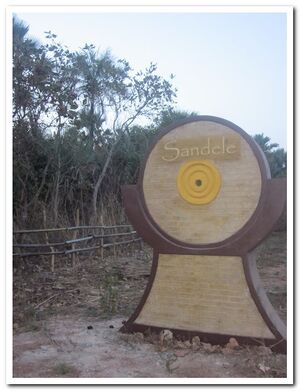 The Sandele Ecolodge run by Geri and Maurice Mitchell has taken the role of tourism to another level. Taking notice that tourism often creates more divides than anything, Geri and Maurice have intentionally created a place that becomes a bridge between the community and tourists. Where roles are changed and are dynamic. Tourists and locals become active, inter-relating participants in a cultural exchange. Geri Speaks of her philosophy towards sustainability noting the interactions between humans and technology, and that for a technology to be sustainable, it must benefit the community.

At Sandele a mixture of activities are offered such as, training initiatives for locals, yoga retreats, responsible tourism courses (for international students as well as Gambians), cultural activities, and workshops or presentations on different appropriate technologies. It took 5 years to build Sandele, 1997-2002. The first guests were received in 2007.

It took much effort and duration to acquire land in an ethical fashion (without giving a bribe) as well as following certain traditional customs such as bringing kola nuts to the local community and maintaining a dialogue with them throughout the process. Several obstacles came up during the process. Finally with help from some very respected and powerful Grand Mothers in the community, Geri and Maurice succeeded to register the plot of land in the name of the community of Kartong. Its the first official piece of land for the community. 90% of the staff come from the village. Also a percentage of the trusts are designed for village development. Geri and Maurice designed the acquisition of the land in such a way, that in 25 years the community will completely take over the lodge.

The physical process of building Sandele was created based on three principles:

On the land is a site of an old lacerite quarry. Its the closest thing to rock found here and is a mixture of clay and iron ore. Besides being a reminder of the history of the land and a source for the local briquettes, the old quarry is an onsite demonstration of how to recover damaged land. 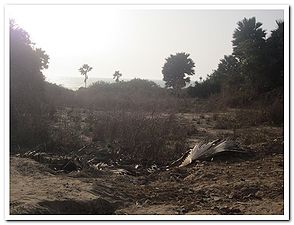 Fig 1:This is the site of an old quarry that is being restored to a more natural, healthy state

The compressed earth briquette machine comes from Auroville, India and has created Kartongs "first factory". It is a labor-intensive, simple appropriate technology. The bricks are made with the the lacerite from the quarry, lime (found at the river bank 4km away), and a little bit of water. The lime is the stabilizing agent, it is mixed with the lacerite found on site and with the water; a dry mix is produced. The machine employs at least 7 people and the bricks that are produced (the machine works by compression) can withstand the weight of "2000 elephants". There are 16 different sizes/shapes that can be produced, allowing lots of creativity in the building process as well as different uses from floor tiles, to walls, to decorative. The blocks also absorb a little bit of carbon. All the buildings on site are built with these bricks, a great alternative to cement. 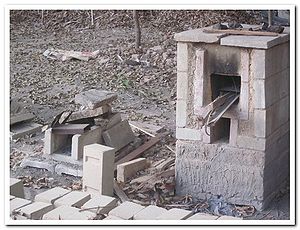 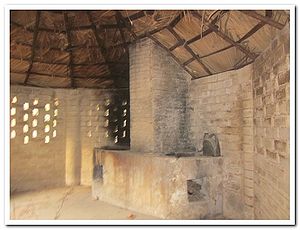 Some graduate students recently visited Sandele and did several experiments with rocketstoves. Sandele is in the process of creating a kitchen equipped with rocket stoves and solar ovens to do the majority of the cooking for the guests and residents.

Throughout the continent, cooking with open fires, charcoal and inefficient stoves in closed rooms, has severely impacted the respiratory health of women and children. This cookroom built with the local briquettes is designed with an efficient stove and proves that even when there is wind and rain, you can cook well without being in a closed room.

There was a project of dried fruit started with some solar dryers. Due to complications of sanitation requirements that project is not active right now. 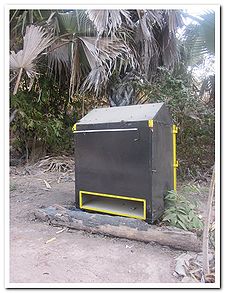 Tatalac is an ancient finishing technique, used often in Morocco. By mixing different quantities of lime, sand and soap you get beautiful natural shades and a polished, soft smooth finish for walls or floors. Here is the testing walls at Sandele, as they experiment with different mixtures, quantities and colors. 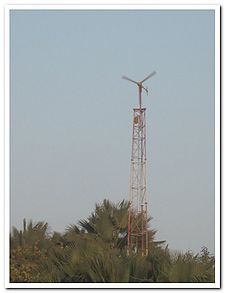 All the energy at the lodge comes from a wind turbine and 8, soon to be 17, solar panels.

Made with the local bricks, the elegant dome guest houses are designed in a fashion that creates a natural ventilation. At the top of the dome is a small opening in which the sides are lined with mosquito netting. The walls and door are also open at the base close to the floor,with mosquito netting. This creates a natural circulation of air, keeping the rooms fresh and cool as the hot air rises through the top and new air is prought in through the bottom.

The sheets used on the beds (beds are made out of local wood that was in the waste stream) are the only raw material with value added that is produced at the moment in Gambia. Women spin the fibers that come from the silk-cotton tree, and the men weave them into sheets. 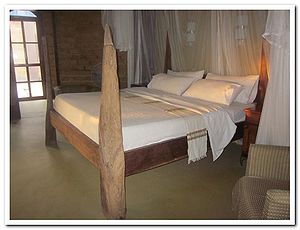 Sandele has created the first Responsible Tourism Agency. They also provide the opportunity for Gambians to study in this discipline. At the time of writing, Geri remarks that there are 13 Gambians who are in the process of receiving their masters in responsible tourism. The face of tourism is changing, and this change is sweeping across Gambia.