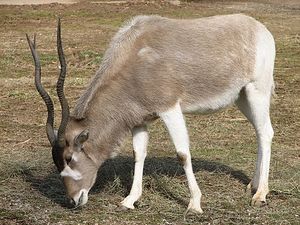 The Saharan Conservation Fund is a non-profit organization that works to conserve and steward vulnerable North African desert habitat.The SCF was created in 2004 by the Sahelo-Saharan Interest Group, an association of zoo managers, biologists and conservationists dedicated to protecting saharan antelope.[1] 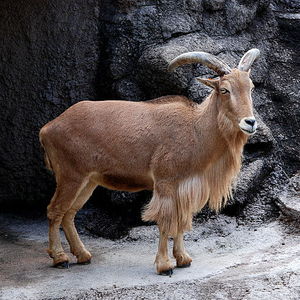 The Sahara desert stretches 3,000 miles from the Red Sea to the Atlantic, and 1,200 miles south from the Mediterranean. The desert covers about 3.5 million square miles of land in 13 nations.[2] The Sahara is a fragile ecosystem, home to thousands of endangered species. The addax gazelle, dama gazelle, and desert cheetah have lost 95% of their former habitat. Drought, habitat loss to human development, overgrazing, poaching, and desertification threaten to push a large number of saharan animals to extinction.[3] The growing supply of assault weapons in North Africa in recent years has given poachers the ability to kill hundreds of animals, and outgun park wardens.[4]

The SCF connects zoo's in the United States, the Middle East, and Europe with scientists and governments in North Africa. They breed and reintroduce endangered animals, work to restore habitat, and connect with local people to protect and survey wildlife. The SCF is currently working on 6 different conservation projects in Niger, Tunisia, Senegal, and Algeria, and pan-saharan survey of eco-systems and wildlife.[5]

In 2012, Niger created a 38,610 square mile nature reserve in the Termit and Tin Toumma region to recognize the importance of SCF conservation. The focus of the project are the worlds last wild populations of addax, dama gazelle, desert cheetah, hyena and barbary sheep. Less than 300 addax survive in the wild, and only in the Termit and Tin Toumma regions of eastern Niger.The SCF monitors the addax population closely, track and map its movements, and record its feeding behavior.[6]

The Termit and Tin Toumma project is also working to protect small carnivorous animals and birds from local efforts to curb jackal populations with poison and snares. At risk are vultures, desert cats, and foxes.[7]

The project employees local people as game wardens and guards. The wardens participate in wildlife surveys with handheld global positioning systems called Cybertrackers. The device allows wardens to map plant and animal life and share the data with SCF scientists online.[8] The SCF also acts as a go-between for local people, the Niger government, and humanitarian aid organizations. The SCF will eventually give management of the Termit and Tin Toumma park to democratic assemblies of the local people.[9]

The Sahara Conservation fund releases a bi-annual newsletter, Sandscript, with updates on its projects and fundraising needs. SCF provides full technical reports of its surveys and conservation projects for free on its website.