The sachet economy refers to the practice, especially in poorer communities, of buying consumer products - such as detergent, shampoo, powdered milk, or beverages - in single-use packages. The products are packaged in small, disposable plastic bags called sachets. Sachets can be used in formal packaging processes, where packets will be more reliably sized, weighed, and sealed, or in informal processes, where product may be packaged in general-use plastic bags or reused sachets.

The sachet economy encourages the consumption of small units of product and is especially appropriate for consumers with very little savings. For many consumers at the bottom of the pyramid, income is irregular and low, so it is easier to purchase small quantities often, rather than buying in bulk. This can be seen in the market for mobile minutes, where poor consumers prefer a pay-as-you-go model to regular lump sums and buy just a few minutes at a time. Another concern in some poor communities is security. In rural villages and urban slums, homes are often unsecured, so inhabitants prefer to keep as few valuable assets on the premises at a time, so it is preferable to use single servings of products.

Critics of the sachet economy suggest that it does not allow consumers to benefit from economies of scale. A product purchased in bulk will cost less than an equal amount of product purchased as many smaller units. While the sachet economy lowers the barrier to economic participation so low-income consumers have access to more products, they are paying more for those products than their higher-income counterparts. Micro savings and credit can make it easier for consumers to purchase higher quantities of goods and benefit from economies of scale. 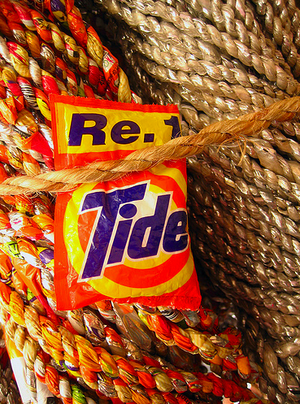 Sachets are typically plastic, perhaps with foil as well. This results in the production of trash and widespread littering, and thus can potentially contribute to drain blockage and flooding.

The informal economy employs a culture of reuse, and some small-scale entrepreneurs have found sachet packaging to be a viable material for products, such as braided rope. A number of appropriate technology products have also focused on generating income from sachet waste. In Northern Ghana, for example, water sachets have been layered and heat pressed for use in footwear.

The term may also be used figuratively, e.g. for the one-off purchases allowed by new distribution channels for music or apps for mobile phones.