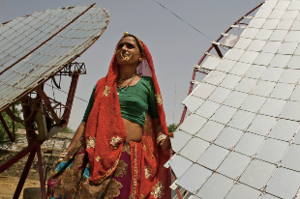 In 1972 Sanjit “Bunker” Roy, inspired by the need for a new way of addressing rural poverty, started the SWRC (Social Work Research Centre) with the goal of setting up clean water and local irrigation technology for rural communities. Roy rented an old British health care center in India to host a night school for training individuals in local rural communities. Night classes which took place in what is now known as the Old School, allowed students to work in their current employment (necessary for supporting their families) and still have the ability to learn in new areas that will later benefit their community. As Barefoot College has expanded and aged, focus has moved toward education, empowerment and building sustainable communities, with an increased focus on women's empowerment. Education and training occurs across a diverse, and important, list of necessary areas that support the building of sustainable and independent communities. The Barefoot College system rejects the business model, which Roy (& others) feel is used too often, stating that this model leaves the "very poor, or very marginalized behind, these individuals are human beings, not consumers." [1]The success of Barefoot College has stemmed from the idea of training and educating people in the way that can help their community from within, "Development must be based in the village as well as managed and owned by those whom it serves" [2].

Originally teachers were health care workers, but as the school has grown, and aged, individuals who have received ten years or more of training now are educators. This furthers the goal of the organization, to create sustainable communities. The program has lead to many rural communities across the globe having access to power, electricity and new technologies. This internal development may not have been possible today without the foundation and ideas of Bunker Roy, but now these communities are spreading knowledge and increased innovations in a sustainable way that is sure to benefit and reach generations to come.

New Campus: Built on eight acres of land, completed in 1985. Made by local men and women, and continues to be maintained by locals as well. Engineered and designed completely by the local community. Became the first fully solar electrified campus is rural India. Contains a library with more than 500 computers, 30 printers, audio-visual training location, and a phone booth. [2]

SWRC, Barefoot Colleges, is built on the foundation of Gandhian beliefs, to lift individuals out of poverty with dignity and self-respect and that resources and tools should be in the hands of the people in the community, to avoid dependency and exploitation.

The difference between literacy and education is acknowledged as many individuals within Barefoot School are considered to be illiterate. Barefoot College holds the belief that education is gained from family, traditions, culture, the environment, and personal experience. While literacy is merely what an individual learns in school. [5]

Barefoot College holds six "Non-Negotiable Values" that are central to the function and sustainability of the program:

Barefoot college (SWRC), with the focus on employing and empowering women has partnered with UNESCO and UNDP, which are UN funded programs, to allow women from areas around the globe who are living in rural poverty stricken areas to come and attend training within Barefoot college. This training allows for women in countries such as Gambia, Malawi, Ethiopia, Sierra Leone, Rwanda and Bhutan to return home with knowledge that will be incredibly beneficial to their communities. [6]

Recognizing that in order to have a sustainable and self-relient society, Barefoot College believes everyone needs to be participating within the development of a community. [4]