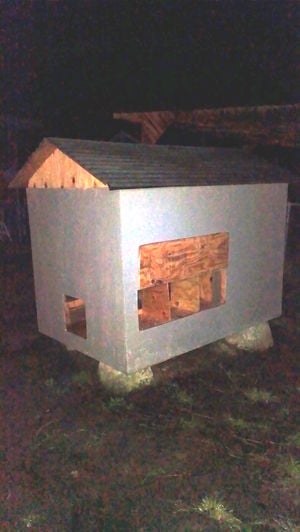 Building a Chicken Coop to help educate students at Redwood Montessori. Redwood Coast Montessori and the Community Center of Manila have made agreements with the ENGR215 Fall 2014 class of Cal Poly Humboldt in regards to incorporate the students' class projects into the area of the Manila Community Center so that they may benefit the school and surrounding community. The Chicken Coop project's objective was to house and protect poulty that may be owned by the school. With children in mind, the coop should be easy to use and with a harsh coastal environment the school is located on, the structure must be durable.

The layout of the chicken coop is a simple 4'x6'x4' box, framed out by 2"x2". The walls and floor are constructed with ¾" sheets of outdoor grade lumber. The coop is being lifted off the ground with four concrete stands located at each corner of the coop. Giving the coop good ventilation, there are two 6"x12" closable openings positioned at the top corners of the side walls. Chickens will be able to enter the coop with a 1'x2' door located on the front side. Once the chickens walk into the coop there are three 6"x9" x1' box like nests placed on both sides. For easy retrieval of the possible eggs being laid in these nests, located on the exterior sides there are swinging doors connected to each individual nest. The doors will be able to pivot of a hinge placed at the top. A single bar that is locked in position and lying across these three doors act as a simple securing system eliminating multiple locks for the coop. Going back inside the coop towards the back there are two roosting bars at different heights giving multiple layers where chickens can roost. The roosting bars are also given a foot space in each direction giving the chickens optimum personal space. Both bars are places on U-shaped frames for the ability of removing them as you lift them up. To make the coop easier to clean, the back wall is turned into a door that is supported by two hinges on the side. Securing the back door so that it cannot be open by anyone is another lock.

The roof is a simple gable style design, measuring at a foot tall, it's made out of the same material as the coop. To make the coop stand up against weather, roofing tile is laid along the top of the rood. This also helps with the insulation.

The chicken run is laid out at 5'x10'x4'. As the main support, there is a framework made out of 2"x2". The run itself is made out of chicken wire with one inch opening to give the chickens' proper protection from predators. To add more protection, the wire runs a foot underneath the ground and buried to ward of predators digging. To get into the run, a 18"x5' door is positioned on the side of the run. To connect the run to the coop, a 6" overlap of chicken wire is given and laid over the coop. A simple piece of lumber is then laid over the overlapping wire and the coop and screwed into place sealing off the inside of the run. 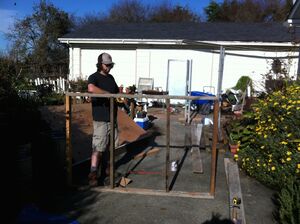 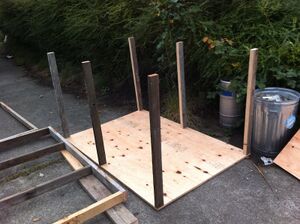 Caption
Assemble the wall frame. • Attach the 4' long 2"x2" members to the floor frame as shown in the figure. Once the frame piece has been attached it should be held in place until the upper portion of the frame has been completely attached to all the wall framing.
3 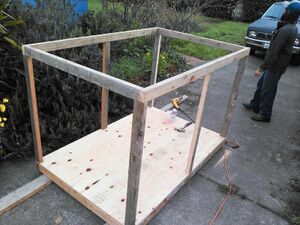 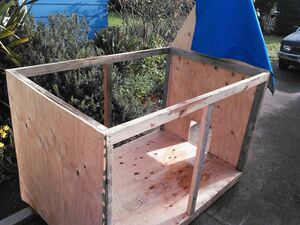 Caption
Building the walls. With desired measurements, cut off your wall panels from the ½" playwood and secure to the frame.
5 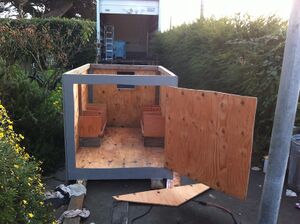 Caption
Cut desired door out of back wall. After, mach sure to use stronge higes for door.
6 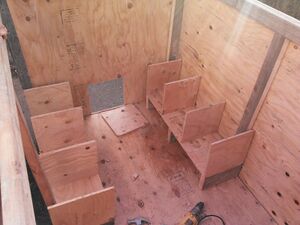 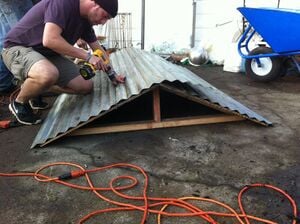 Caption
Building the roof. Assemble the diagonal roof members and the center longitudinal roof member. Attach the ½" playwood to the frames. Apply roof paper to panels for better seal. Attach tin sheet to top for the last layer on top.
8 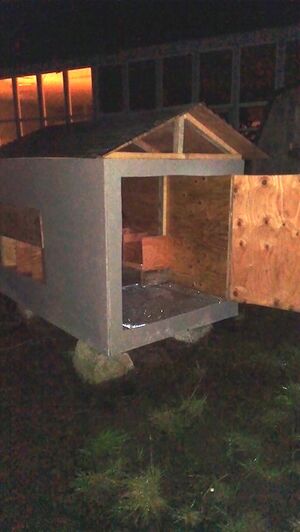 Caption
Attach the finished roof to the top of the Chicken Coop's inner framework.

How to maintain the Alice COOPer chicken coop[edit | edit source]