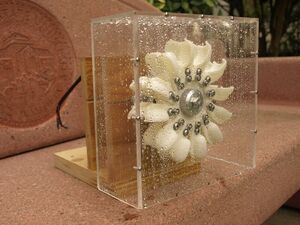 Cal Poly Humboldt's Renewable Energy Student Union built a portable picohydro unit to demonstrate sustainable hydro power at a workshop they hosted at the California Student Sustainability Convergence in November 2013. They now intend to use the demo unit for future educational purposes in classrooms and at events.

In Fall 2012, HSU received a grant for a Stratasys SE+ 3D Printer and the ABS plastic material it uses. This opened up a world of opportunities to inexpensively fabricate new tools and parts, and to easily repair old devices that were previously defunct. The Renewable Energy Student Union is a hands-on engineering club, whose president at the time, Camille Penny, articulated a microhydro demonstration project that would utilize the new tool with a 3D printed Pelton wheel as the turbine. Furthermore, multiple turbine designs could be printed and tested on the unit, to compare their power outputs at different head/flow combinations.

Prior to the project, RESU wasn't aware of any microhydro demo unit of this scale. Professor Lonny Grafman uses premade hydro power demo kits made by Pasco [1] in his Microhydro Lab for ENGR 371: Energy Systems and Technology. The kits are fairly dysfunctional, the turbine is small and isn't displayed well, and the system has a cumbersome setup that cannot be brought everywhere. Penny identified the need for an educational tool that showed more visibly the potential of microhydro.

Although the unit demonstrates sustainable microhydro power, technically it is classified as picohydro, as it is under 5,000 watts.[2] The Pelton wheel is an impulse turbine design and thus is most effective in hydraulic situations with high head and low flow. Pelton wheels are often as high as 80% efficient, and are the most commonly used turbine model for microhydro systems in Northern California.

Picohydro demo unit must be:

The Pelton wheel was 3D printed using an open-source GrabCAD file [1]. Each bucket was printed individually, as was the body, all of which were bolted together after they were complete.

Municipal water measurements gathered empirically by RESU members found an average flow rate of 6 GPM and an average water pressure of 40 psi, which translates to 28.1 meters of head. Using this information, RESU assumed that municipal water would provide enough power to make the turbine fly.

RESU obtained all materials from various educational facilities on campus at no cost, except for the hose nozzle, which they purchased for $5.

The picohydro unit adequately meets almost all of the project criteria, as it is compact, portable, and has the potential to visibly produce energy from a municipal water source. An open circuit voltage of 7V was achieved upon testing the unit using a hose outside Founders Hall with an 1/8 inch nozzle.

To fully meet its goal to demonstrate microhydro power, the following steps should be taken: