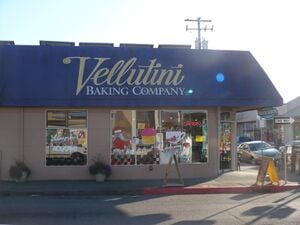 This page contains an analysis of the Redwood Coast Energy Authority's (RCEA) lighting retrofit of the Vellutini Baking Company (Figure 1). The purpose of the analysis is to determine the effectiveness of the retrofit by calculating the energy saved, carbon dioxide reduction, money saved, and payback time of the retrofit.[1] To learn more about the project visit: RCEA energy audit reviews.

The Redwood Coast Energy Authority is an organization based out of Eureka, California with a mission statement as reads: "The Redwood Coast Energy Authority's (RCEA) purpose is to develop and implement sustainable energy initiatives that reduce energy demand, increase energy efficiency, and advance the use of clean, efficient and renewable resources available in the region".[2] The RCEA uses grants from the Pacific Gas and Electric Company (PG&E) and the US Department of Energy (DOE) to operate. 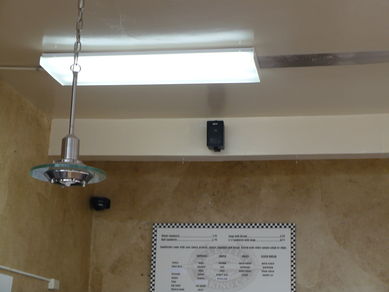 Figure 2: One of the four foot long fluorescent bulbs (Photo by Taylor Edwards)

With their mission statement in mind, the RCEA worked with the Vellutini Baking Company to increase bakery's energy efficiency. To achieve this the RCEA helped to replace the bakery's incandescent bulbs with more efficient florescent bulbs in July of 2008.

Interview with the Owner[edit | edit source]

The owner of the bakery decided to go ahead with the retrofit because of the fluorescent bulbs, "are a better product and are better environmentally".[3] Mr. Vellutini (Figure 3) informed us that the the retrofit included replacing incandescent bulbs with 15 fluorescent bulbs. There were 14, four-foot bulbs installed inside the bakery (Figure 2) and one large compact fluorescent installed outside.[4] He said that he wouldn't have gotten the upgrade without the RCEA and that he would do more retrofits, "if something broke and the replacements were more efficient." Mr. Vellutini stated that the bakery's energy usage habits did not change at all after the retrofit and that he was pleased with RCEA's work.

Notice: The average energy use before and after the retrofit was calculated by:

Calculations indicate that the RCEA's predictions were wrong. The data indicates reverse outcomes when compared to the RCEA's predictions as seen in Table 1. It is shown that the Vellutini Baking Company lost $3.80 per month and $46.77 per year. Also, the company lost 360 kilowatt hours per year instead of saving the predicted 4,065 kilowatt hours per year. The results were found using averages of kWh usage per month. Furthermore, the carbon dioxide emissions increased by 15.72 pounds per year opposed to being reduced by 2,113 pounds per year.

Page data
Retrieved from "https://www.appropedia.org/w/index.php?title=RCEA_energy_audit_reviews/Vellutini_Baking_Company&oldid=647852"
Cookies help us deliver our services. By using our services, you agree to our use of cookies.
Categories:
About Appropedia · Policies · Contact · Content is available under CC-BY-SA-4.0 unless otherwise noted.