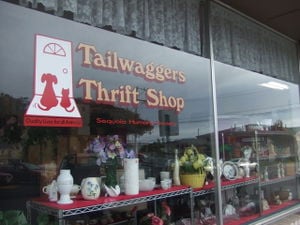 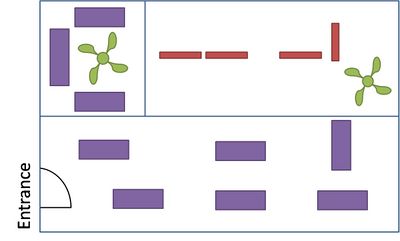 Figure 2 Store layout with approximate locations of all lights changed during the retrofit. 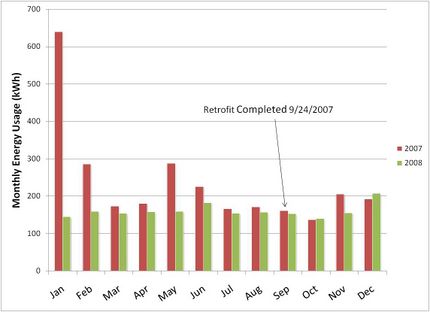 In 2006, Tailwaggers Thrift Shop was unaware of the energy saving opportunity that was available by switching from their current fluorescent light bulbs to energy efficient fluorescent light bulbs. During the winter months (2006-2007), there was a lot of energy being consumed for light because December, January, and February are the darkest and coldest months of the year. After the new lights were put in, energy consumption in the winter months of the following years decreased by roughly 450kWh. For example, during the months of February and March of 2007 and 2008, the energy consumption was reduced by 32% seen by the trend lines in Figure 3.

The Tailwaggers Thrift Shop saved money and energy by participating in RCEA's lighting retrofit. A year after the retrofit (9/07 - 8/08), they saved $212, about $68 less than RCEA's prediction. Tailwaggers Thrift Shop's yearly savings paid back the $412 installment cost after two years. This time period is known as simple payback, and is 0.5 years later than RCEA's predicted payback time. Furthermore, the shop is now saving roughly 1,500 kWh per year (data shown in Table 2). 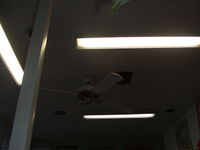 Figure 4 Three lights that get turned off during bright and sunny days (Photo by J. Osborne).

The behavior of the Tailwaggers Thrift shop volunteers went unchanged after the the new lights were implemented. The lights continued to remain on only during business hours (Monday-Friday 10am – 5pm, and Saturday 11am – 3pm). The executive director of the Sequoia Humane Society, Cyntha MacMillan, agreed to install the new light fixtures because she knew they would save the non-profit organization some money as well as eventually pay for the initial installment cost. MacMillan would not have completed a lighting upgrade if it were not for the RCEA's assistance. Furthermore, MacMillan is not looking for any new retrofits at this time. Nevertheless, MacMillan is pleased with the lighting retrofit, but it did not change the attitude of any of the volunteers.[6]

After hours the lights were always turned off. The managers would often turn off the lights in the front (Figure 4) because the bay window let in enough sunlight. However, during the winter months, there would be a higher energy consumption because December and January are the darkest thus most energy-demanding months of the year. The owners and long-term volunteers are pleased about the switch, but the change in lights had no change in their behavior. Manager Elly Burger only wishes she had known about the retrofit opportunity sooner.