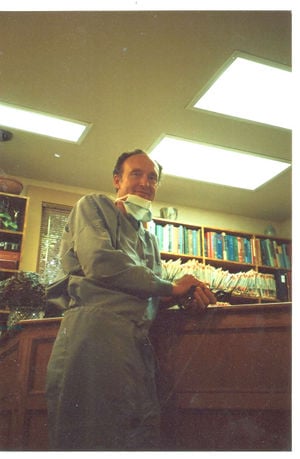 Figure 1: Dr. Benoit in his office with an example of his office's lighting retrofit (Andrew Collins Anderson 2009).
Project data

Richard E. Benoit DDS is a local dentist who is interested in being more environmentally conscious. He was contacted by the Redwood Coast Energy Authority (RCEA) whose purpose is to develop and implement sustainable energy initiatives that reduce energy demand, increase energy efficiency, and advance the use of clean, efficient and renewable resources available in the region.[1] Dr. Benoit's lighting retrofit is a project under RCEA's Audits and Upgrades of Commercial Buildings Program.

Dr. Benoit's (Figure 1) general dentistry practice is located in Northern Arcata, CA. He has been working in Arcata for the past twenty years, but the building housing Dr. Benoit's practice is a 109 year old Victorian home. Dr. Benoit is the primary dentist in the office, but he shares the space with an oral surgeon for one day a week. His building is in use from approximately six a.m. to five p.m, Monday through Friday. In Dr. Benoit's office they do not leave the lights on at night and they turn off the breakers at the end of each day. There is a need for high quality lighting in Dr. Benoit's work because he is working with many tools and in people's mouths. There is also a need for the light to be as close to natural sunlight as possible because he does shade matching of teeth. Dr. Benoit needs to be able to adequately see what he is doing because there are many consequences involved in his work. He has the health of his patients in his hands [2].

Dr. Benoit had all of his office lighting changed from older fluorescent lamps and incandescent bulbs to compact fluorescent light bulbs CFLs and energy efficient fluorescent ballasts. The initial survey was done on February 19th, 2008 by RCEA. In the survey, there were approximately 20 60 watt incandescent bulbs replaced with 14 watt cfl's. Ten fluorescent tube lights along with their ballasts were replaced with five energy efficient fluorescent tube light ballast combinations. The contractor for this project was Nate Mckeever of Mckeever Energy and Electric. This retrofit took one day to complete, and was done on the weekend so there was no disturbance of normal business practices. There are several energy demanding appliances used in Dr. Benoit's office. He uses steam sterilizers, compressors and a suction system in his practice. There were no changes in Dr. Benoit's energy use habits after the retrofit. 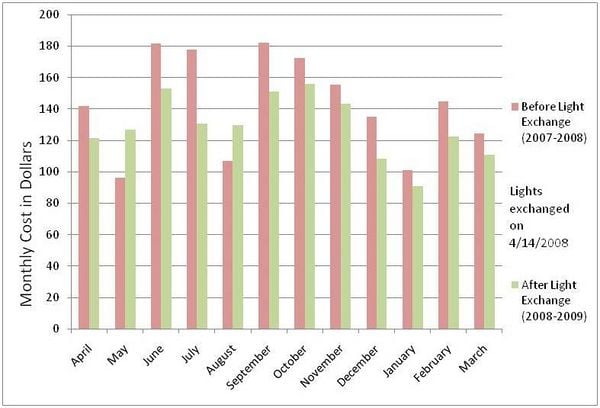 (Figure 2) This graph shows a month by month comparison of energy bills one year before the retrofit (red) and one year after the retrofit (green). This graph shows the energy usage fluctuations throughout the year, and how much money was saved each month. The data is based off the information recorded by Pacific Gas and Electric Company(PG&E). .[3]

After review of the savings, the estimated simple payback time will be 2.9 years.

The actual energy savings were 1,023 KWH per year (shown in Figure 3).

Did you significantly change how you light your business after the retrofit?

No, we haven't changed our lighting practices since the retrofit. We have always been trying to be frugal with our energy usage. We turn off our breakers at night.

Why did you decide to do the lighting upgrade?

RCEA contacted me, and I felt that it would be the best thing for me to do.

Would you have completed the retrofit without RCEA?

No, I probably would not have done this retrofit without RCEA.

Are you interested in doing more retrofits in the future?

Are you satisfied with the work that RCEA did for your business?

Yes, I am very happy with what they did. They were very professional and clean. This is important because this is a health care facility. They finished the project in one day.

What is the most energy intensive aspect of your business? 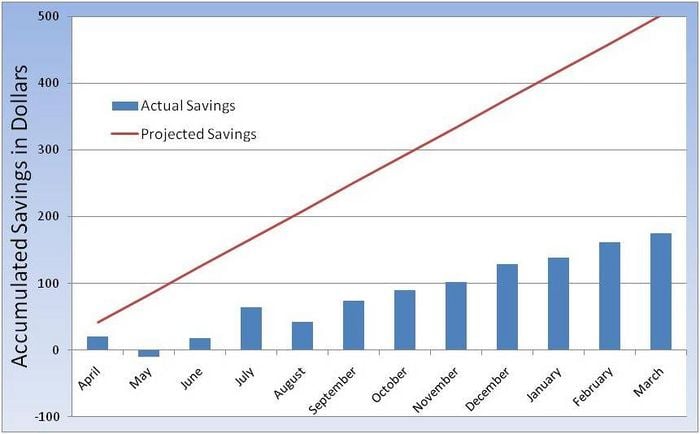 Are there more energy efficient machines and methods used in the dentistry field?

Waste is a really big part of health care. There are many one time use products that are used in dentistry. There are green companies, but there is a problem when using these green products. We have to find a balance in ethics. We have to choose between serving our patients and environmental responsibility.

Did you get any compliments about the more energy effiecient lights in the waiting room or office?"

No, we haven't had any compliments on the new flourescent lights.

Do you have a preference between the warm and cool bulbs?

In our office we need the light to be as close to natural sunlight as possible, since we do shade matching for teeth.

In summary, this lighting retrofit was a successful business interaction as represented through the personal interview with Dr. Benoit. Even though the projected energy savings were higher than the actual, there was still energy saved with the retrofits (shown in Figure 2). There could be several reasons for the overestimated savings, such as increased energy cost for the second year. The price of energy increased between the first year and the second. The average cost of the year preceding the retrofit was about 0.1685 dollars per KwH, where the year after was about 0.1727 dollars per KwH. This price change is only responsible for being about 44 dollars under the projected savings. Other reasons are not clear as to why the projected savings were not made.