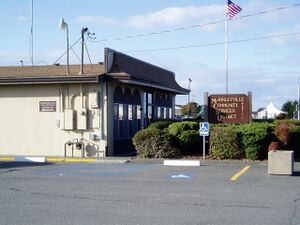 The Redwood Coast Energy Authority(RCEA) worked in partnership with Pacific Gas and Electric Company(PG&E) to implement the Energy Watch 2006-2008 program. The program was designed to help a wide range of Humboldt County PG&E customers increase their energy efficiency and reduce CO2 emissions through reduction of power usage. One aspect of the program involved the RCEA working with local businesses to facilitate energy savings and reduce long term energy costs by replacing existing lighting fixtures with newer, more efficient alternatives. Through this program, the RCEA was able to provide the Mckinleyville Community Services District with assistance in designing a lighting retrofit project to fit their specific needs. The RCEA plan included locating an electrical contractor, providing a specific retrofit plan for the business, and helping the business take advantage of rebates offered through the Energy Watch 2006-2008 program.

The McKinleyville Community Services District (MCSD) is a municipality that serves the census-designated area of McKinleyville. Since McKinleyville is not officially a city, it does not have a city government to provide basic public services, so the MCSD fills this position. The MCSD is headed by a publicly elected 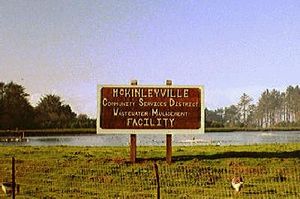 Board of Directors and provides a sewer/wastewater treatment service, a drinking water service, and maintains public recreation areas like parks. Collected sewage is treated at a facility just north of Hiller Road.[1] Public drinking water is purchased wholesale from Humboldt Bay Municipal Water District and is piped from the storage tank on Essex Hill to McKinleyville.[2] The MCSD Parks and Recreation Department maintains and oversees parks like Hiller Park and Pierson Park, sponsors sports programs like basketball, and manages facilities like the McKinleyville Activity Center (MAC).[3] 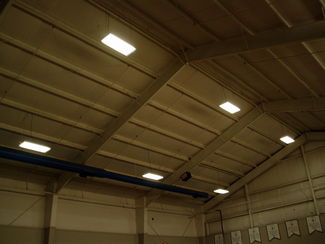 Replacement light fixtures in the gymnasium of the MAC. (Photo Courtesy of Tim Kukuk.)

The retrofit plan for the MCSD included lighting changes at multiple locations. The Pierson Park restrooms received upgrades in the form of photocell installations for their outdoor nighttime fixtures and installations of motion sensing fluorescent fixtures indoors. Photocells save energy by triggering outdoor lights according to ambient conditions, rather than a timer. This means that outdoor lights will only come on when it is dark or, in other words, for the shortest effective time.

The Mckinleyville Activity Center received building-wide upgrades to more energy efficient florescent lighting fixtures with motion sensing capabilities to insure that they are only on when needed. The Activity Center is the largest single facility operated by the MCSD from an energy usage standpoint and as such, provided the greatest opportunity to increase efficiency. 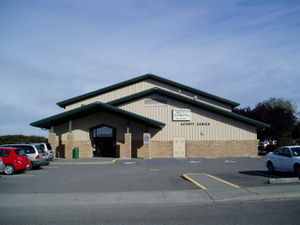 The McKinleyville Activity Center (MAC), is located at 1705 Gwin Road in Mckinleyville. It is a 10,000 square foot sports facility for community use. Programs held here include various adult and young adult community basketball leagues, a weekly skating event, dances, after school children's programs, and a daytime community playgroup for kids five and under. The effectiveness of the retrofits to this particular facility will be the subject of this report, though they are only a part of the total project.

As mentioned above, retrofits were also performed in other facilities, this report will simplify the calculations by comparing the energy saving estimates and true output from the data at the MAC only. The MAC consists of a gymnasium, a lobby with a concession area, and a skate room. Through the Energy Watch 2006-2008 program, the RCEA conducted a site survey and developed a specific plan to increase efficiency in the MAC by removing the existing Metal Halide 175 watt M1-1L and 400 watt M2-2L globes and replacing these with 192 watt (total) T8 4' LOW BAY-5000 ºK / wire guard and lift fluorescent fixtures, which require less electrical energy per unit and use motion sensors to further regulate energy use. A total of 21 fixtures were removed and 17 fixtures replaced in the MAC resulting in a 48% total wattage rating reduction from 6,745 watts before the retrofits to 3,264 watts after completion.

The retrofits to the McKinleyville Activity Center successfully reduced power usage by 48%. On a yearly basis, this reduction saves the MCSD $1,712 on MAC energy bills. The energy not needed by the MAC as a result of the retrofits also corresponds to an offset of atmospheric Carbon Dioxide (CO2) produced as a by-product of electricity generation. This is important because CO2 in the atmosphere contributes to global warming. The yearly total of CO2 offset by the MAC retrofits is 5,366 pounds per year, which is approximately equivalent to the amount of CO2 produced by driving a passenger car 6,200 miles or from San Francisco to New York City and back[4].[5]

(Figure 1.) Energy draw by the Mac over the course of three years. (Data courtesy of MCSD.)

Figure 1 shows the effects of the October 2007 retrofit completion as a sustained drop in energy usage. The normal fluctuations in energy demand throughout the year still continue, but each corresponding month shows a lower relative level of energy usage. The ratio between the energy used before and after the retrofits is also visible in Figure 2. The red bars represent monthly energy usage before the retrofits and the blue sets of bars represent the years following the installation. For each month, it is apparent that the red, pre-retrofit bars are higher than the blue, post-retrofit bars.


Aside from facilitating the retrofit project, RCEA also provided predictions to the MCSD on what savings could be expected from the installations. These estimates were, as shown in Table 1, about 20% greater than the actual savings of dollars, energy, and CO2. This shows that though there were discrepancies in the predictions, (as should be expected in all predictions in any field) the estimates were still able to provide a basic guideline.

(Figure 2.) Comparison of monthly power usage by year. The pre-retrofits red bars are consistently higher than the blue bars following the retrofits. (Data courtesy of MCSD.)

The payback values are the amount of years it will take for the energy savings to equal the cost of the retrofits. Table 1 gives the time for the total cost of the retrofits to be offset by total dollar savings on electricity as approximately three years. With the rebates secured for this project, however, the actual payback time from the perspective of the MCSD will be 2.6 years from the completion of the project, which corresponds to May of 2010 after the rebate of $1,963 is subtracted from the total implementation cost. 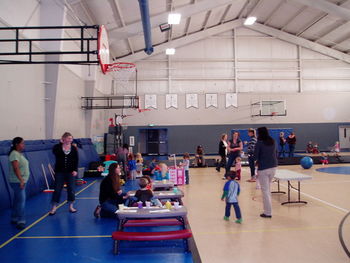 KidZone, a daytime playgroup for children five and under in the McKinleyville community. (Photo Courtesy of Tim Kukuk.)

The General Manager of the McKinleyville Community Services District and the Parks and Recreation Department Director have mixed reviews regarding the formulation, implementation, and results of the MAC plan. When asked if retrofits like these would have been performed without the input of RCEA, it was stated that the projects taken on by the MCSD had already been in consideration before contact with RCEA and that the plan implementation fell perfectly in time with a schedule that had already been loosely set. As a municipal institution with some duties directly related to environmental impact, the objective of the retrofit program coincided with the MCSD's mission of utilizing new technology to minimize power usage.[6]

Upon review of the MAC plan the client expressed satisfaction with the opportunity to move forward with the MCSD's commitment to being environmentally conscious and energy efficient through various pathways, RCEA being one of these. The MCSD was also pleased to have the opportunity to receive rebates offered in conjunction with the Energy Watch 2006-2008 program. In addition the client expressed satisfaction with the energy savings overall, specifically noting the motion sensing capabilities of the newly installed fixtures at the MAC and the efficiency resulting from the fixtures turning on or off according to activity.

Site inspection and interviews at the MAC also revealed some areas of concern. First is the need for increased brightness or luminance in the gymnasium area. This recommendation is based on shadows cast in some locations and general dim appearance overall that the client believes is noticeably inferior to the original lighting system. Second is the concern over the durability of the new fixtures. The client stated that the grill for one of the retrofitted fixtures was, at one point, loose and visibly hanging, requiring MCSD staff to inspect and re-secure all of the fixtures. Another issue was raised regarding the installation of some of the fixtures in the MAC gymnasium. Confusion over placement during installation resulted in 4 of the 12 fixtures being located in close proximity to an overhead heating duct that travels the length of the gym. The client believes that the overall luminance is negatively impacted by the duct blocking a portion of the output from these four fixtures.[7] 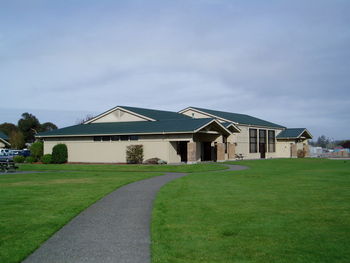 Azalea Hall, another building that the MCSD would like to retrofit similarly to the MAC. (Photo Courtesy of Tim Kukuk.)

Overall, the benefits of the retrofit plan developed by the Redwood Coast Energy Authority outweigh the concerns, as evidenced by the MCSD's desire to move forward on similar projects at their other locations. The MCSD expressed interest in performing lighting retrofits regarding interior fixtures at the Azalea Hall and Senior Center, and additional lighting retrofits at both Pierson Park and the Sheriff's station. When asked if the MCSD would consider going through RCEA again for these projects, the client responded that if the return of this review showed that the RCEA estimates were accurate, they would be willing to work in conjunction with RCEA in the future.