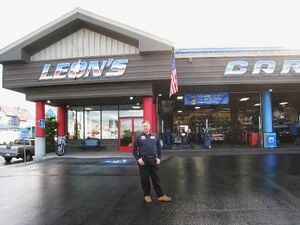 Leon's Car Care Center (Figure 1) is a family owned and operated business that has been in Eureka, California for over 48 years. Since 1992, Leon's Car Care Center has been located in a steel I-beam shop with an attached wood frame office, built new to their specifications. The building was designed to decrease reliance on electric light by utilizing windows in the upper reaches of the structure, allowing natural light to penetrate to the main shop area.


Lighting accounts for 20% to 50% of the energy consumed by a commercial building.[3] Automotive repair requires the use of power tools and computerized diagnostic equipment in addition to sufficient lighting. Power tools consume more operational current than lights, but are used sporadically, while lights are on continuously. The shop is also equipped with eight vehicle lifts and two air compressors that run most of the power tools.

New Fluorescent Lamp Ballast Energy Conservation Standards (10 CFR, Part 430) were set in 2000 by the US Department of Energy, establishing a new minimum Ballast Efficacy Factor. These new standards effectively discontinued production and sale of the ballasts used in conjunction with T12 lamps by 2005.[5] The 40 watt T12 lamp ballasts were replaced by 36 watt T8 lamp ballasts, producing the same amount of light while using less electricity.[6] The T8 electronic lamp ballasts, installed by the RCEA, and certified by the National Electrical Manufacturers Association, reduced consumption by an additional two to five watts.[7] Older magnetic ballasted fixtures have a noticeable flicker that can reduce efficiency of the lamp by up to ten percent.[8]

After the RCEA retrofit, electrical consumption dropped an average of 252 kWh per month. This value exceeded the RCEA predicted savings of 4.2 percent. Cost savings and CO2 emissions reductions have been calculated using the same monthly kWh value.

Electrical consumption over a three year period was graphed (Figure 6) and labeled to indicate when the RCEA retrofits occured. Another graph (Figure 7) compares electrical data before and after the retrofit. The ten-month periods of June 2008 to March 2009, and June 2007 to March 2008 are used as comparison periods before and after the retrofit (Figure 7). The sample time period was limited, due to the fact that ten months after the retrofit, Leon's performed their own lighting retrofit. The monthly averages are projected to one year for comparison to the RCEA yearly values. 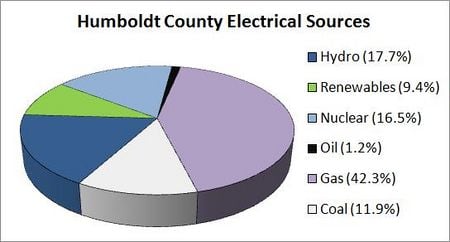 The RCEA retrofit reduced carbon dioxide emissions at Leon's by 1,585 pounds per year. Kilowatt hours (kWh) can be equated to pounds of CO2 emitted in relation to the various processes involved in the production of the electricity. Humboldt County's electricity comes from a number of sources (Figure 9).[13] Pounds of CO2 produced per kWh varies from source to source, e.g. electricity generated from burning coal produces an estimated 2.25 pounds per kWh,[13] all of this is associated with the actual emissions coming from the combustion. PG&E reports that it generates 0.524 pounds of CO2 per kWh produced. The kWh consumption by Leon's Car Care has been converted to pounds of CO2 in Figure 8.[14]